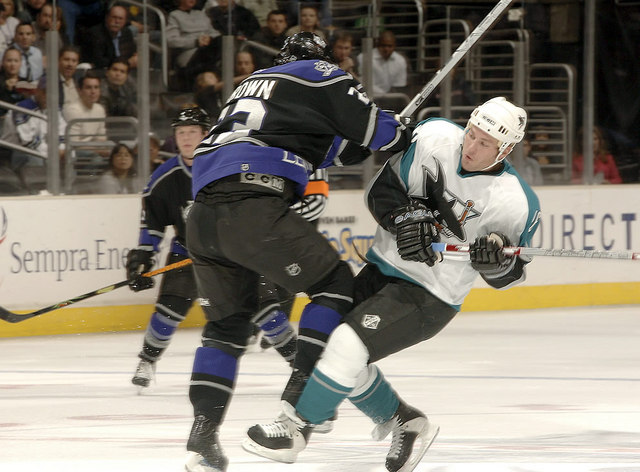 It’s no surprise that after news broke of Dustin Brown’s availability in the trade market, he’s been the new topic of conversation heading into the last weekend before the deadline. As the captain of the Kings and a member of the American Olympic squad, Brown has a pretty big profile and manageable cap hit, making him an obvious target for most teams.

Bob McKenzie had this to say about who looks interested right now:

So we know there is plenty of interest, and many of the clubs involved are also rumored to be in on Nash. It’s no surprise that the Leafs are involved with Burke stating that he wants to add some physicality to the top six. Brown hits everything he sees.

Philadelphia’s involvement sort of tells me that if they managed to land Brown, Van Riemsdyk would likely be out on the next plane. There is the chance of a domino effect here.

As far as the Leafs are concerned, who would be a trading piece? Well, luckily Pierre Lebrun just weighed in on that as well:

My guess is that the Leafs would be willing to move Luke Schenn in a straight swap for Dustin Brown but Kings will want more.

I’m not sure how much more the Kings could possibly want, but this is an interesting tweet nonetheless.

The idea is that the Kings want to move out Brown to free up some room and possibly because they’re looking to make a change to their captaincy. Perhaps they want to hand it over to Mike Richards so that he quits playing like absolute garbage.

The word below the street is that the Kings want a defenceman and a secondary scorer in return for Brown. Since Brown is only a secondary scorer himself — usually landing in the 55 point area — this seems like a blatant overpayment. If the Leafs are to add to this currently rumored Schenn package, I hope it isn’t anything of too much substance.

I’d be fine with seeing Brown in a Leafs jersey, but only for the right (sort of low) price. He’s no superstar.