It’s only three games, and that’s not enough time to properly evaluate a coaching change.

But the numbers are surprising and worth looking at, even if this turns out to be a short-term dead cat bounce for the Toronto Maple Leafs under new head coach Sheldon Keefe.

1. The Leafs Deserved to Win

According to MoneyPuck’s game simulations, the Leafs earned these three Keefewins™ in regulation. That is very unlike the Pittsburgh game, which had to be the low point of the season, not to mention the many forgettable games before that. 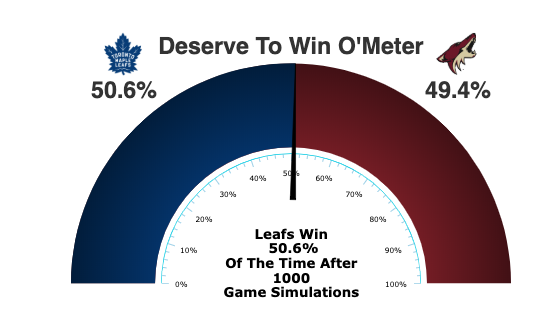 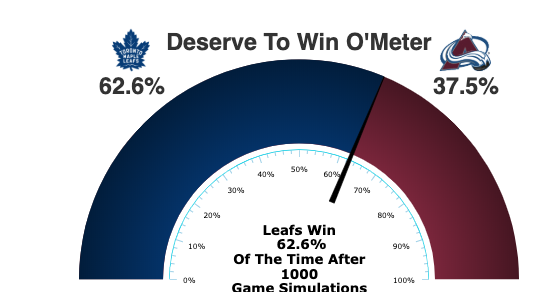 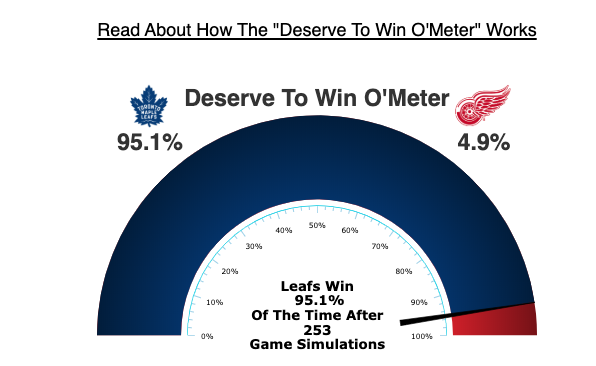 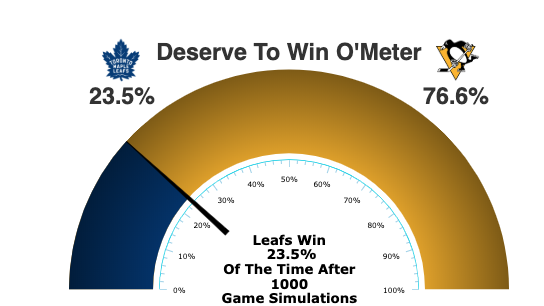 Last night’s 6-0 shellacking might have been the best game this season by the Toronto Maple Leafs. They recorded 54 shots on goal to just 25 from Detroit. I know the Wings are a bottom-three team, but the 60-minute effort and execution by the Leafs brought back memories of the swashbuckling 2017-18 season.

I know I am supposed to talk about the numbers, but let’s put them in context first by looking at a few clips from last night. You might also want to read Anthony Petrielli’s excellent piece from earlier this week breaking down several of the changes brought in by Sheldon Keefe.

Despite everything that has taken place, we can’t completely ignore the impact Mike Babcock had in leading the team out of the wilderness over the first three seasons, even if the playoffs were unsuccessful and more recent events led to his firing. But it’s time to look ahead.

William Nylander has been unleashed. His play has been exceptional of late.

Notice how the forwards rotate off the puck and seek open areas before Nylander eventually bats a line drive into the net. The team seems much more dangerous like this than when they pushed down the boards and predictably sent pucks back to their defense for a point shot.

What a play by Nylander. 4-0 Leafs. #LeafsForever pic.twitter.com/u0nklXwnd5

You can see the same thing here on the earlier Tavares goal. Watch the five-man unit’s movement without the puck and the confidence put in the defense to keep the attack probing for a chance. I don’t want to exaggerate this  — it did happen under Babcock to some extent — but it is a different animal than the “back to the blue line for a low percentage shot” style.

The Leafs move the puck well. Tavares with the goal. 3-0 Leafs. #LeafsForever pic.twitter.com/NpvnxVUxtx

All of this translates to more zone time. In fact, there was a stretch where the Leafs possessed the puck in the Detroit zone for a full one minute and 17 seconds while constantly working the same approach.

Here's the entire sequence where the Leafs hemmed the Red Wings in their end for a minute and 17 seconds. #LeafsForever pic.twitter.com/BZVemqwqsC

3. All of the Team’s Metrics Improved

This table summarizes how key metrics changed between the 23 games under Mike Babcock and the past three games under Keefe. Again, the Keefe results are very early and limited, but the team has seen a bounce out of the slump it was mired in.

I will cover some of these changes more in charts to follow.

Worth noting is the fact that the Leafs have outscored their opponents 14-4 in the three games — that +10 goal differential compares to a -8 differential over the previous 23 games. They also flipped the narrative about starting on time by scoring eight of their 14 goals in the first period, something seldom seen earlier in the season.

The core engine of a team’s offense is usually seen in how they drive play to the other end of the rink at 5v5. That’s why these shot share metrics are important, whether pucks are going in the net or not.

Every one of these 5v5 measures has improved under Keefe’s early tenure, led by the actual goal scoring ratio, GF%. The Leafs have scored 79% of the goals at even strength, but the one I pay most attention to is xGF% — expected goal share — because it removes the random luck (or bad luck) tied to shooting and save percentages while maintaining a focus on shot danger versus the simpler shot attempt share (CF%).

The team has boosted their xGF% by 20% to 67.9%. We can’t get carried away over three games (20 would be much more stable), but the results are very promising. Also of note is the difference between the quantity and importance of shots. In this case,  the expected goal share under Babcock was poor – 47.9%, -4.4% below the shot share (CF% = 52.3%). This in a way describes the situation many characterized as “too many point shots”, or “not enough protection in front of the net”, or “not getting into the high danger areas before shooting”. 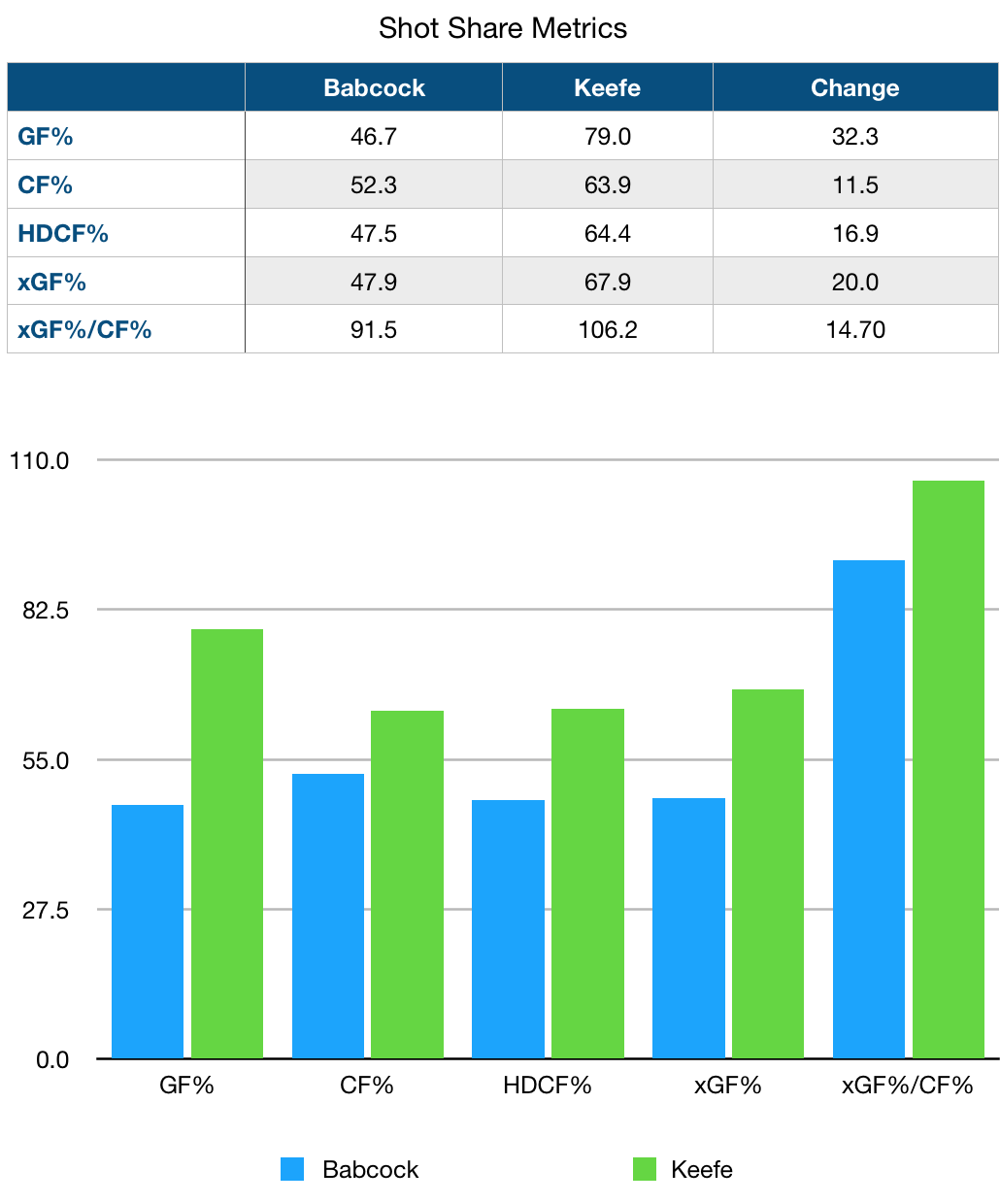 The improvement in two way shot share is also seen in the offensive metrics. Anthony Petrielli’s article mentioned earlier described how activating the defense and pushing a forward into open areas in the offensive zone was part of the new game plan.

Having an aggressive forward stance as a release valve means fewer predictable plays back to the defense and ideally, more high danger opportunities. It’s risk/reward, but it has been working, as you can see by the chart. The Leafs have improved their 5v5 high danger chances to 18/hour compared to 10/hour before. The all-situations shooting percentage has grown as well. 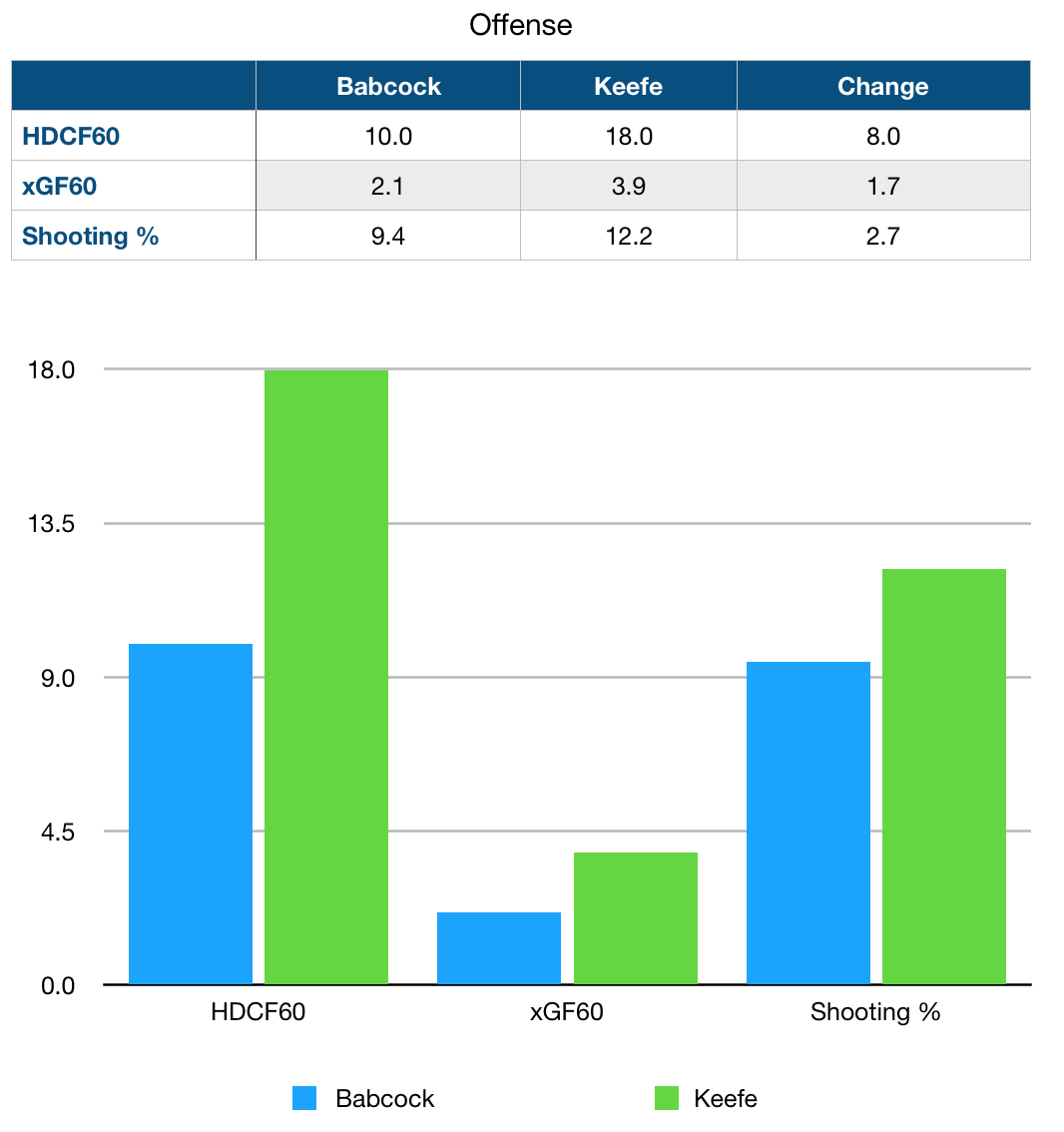 The relationship between team offense and defense is complicated. On the one hand, if you are spending roughly 2/3 of the game in the other end (proxied by a CF% of 63.9%), that should keep the defensive zone relatively quiet. On the other hand, pushing for that advantage in the offensive zone can involve more risk-taking and mistakes, which can lead to more frequent higher danger chances against, whether on the rush or in the slot area.

The good news for the Leafs is they have been able to improve their xGA60 suppression (expected goals against per 60 minutes), dropping it from 2.3/60 to 1.8/60.
Other defensive stats have followed suit, including better suppression of 5v5 high danger chances and a 6% improvement in all-situation save percentage by Frederik Andersen to 95.7%.

Better defense and better goaltending have both played a role in the Leafs limiting opponents to four goals in the last three games, all on the road where matchups are more difficult. 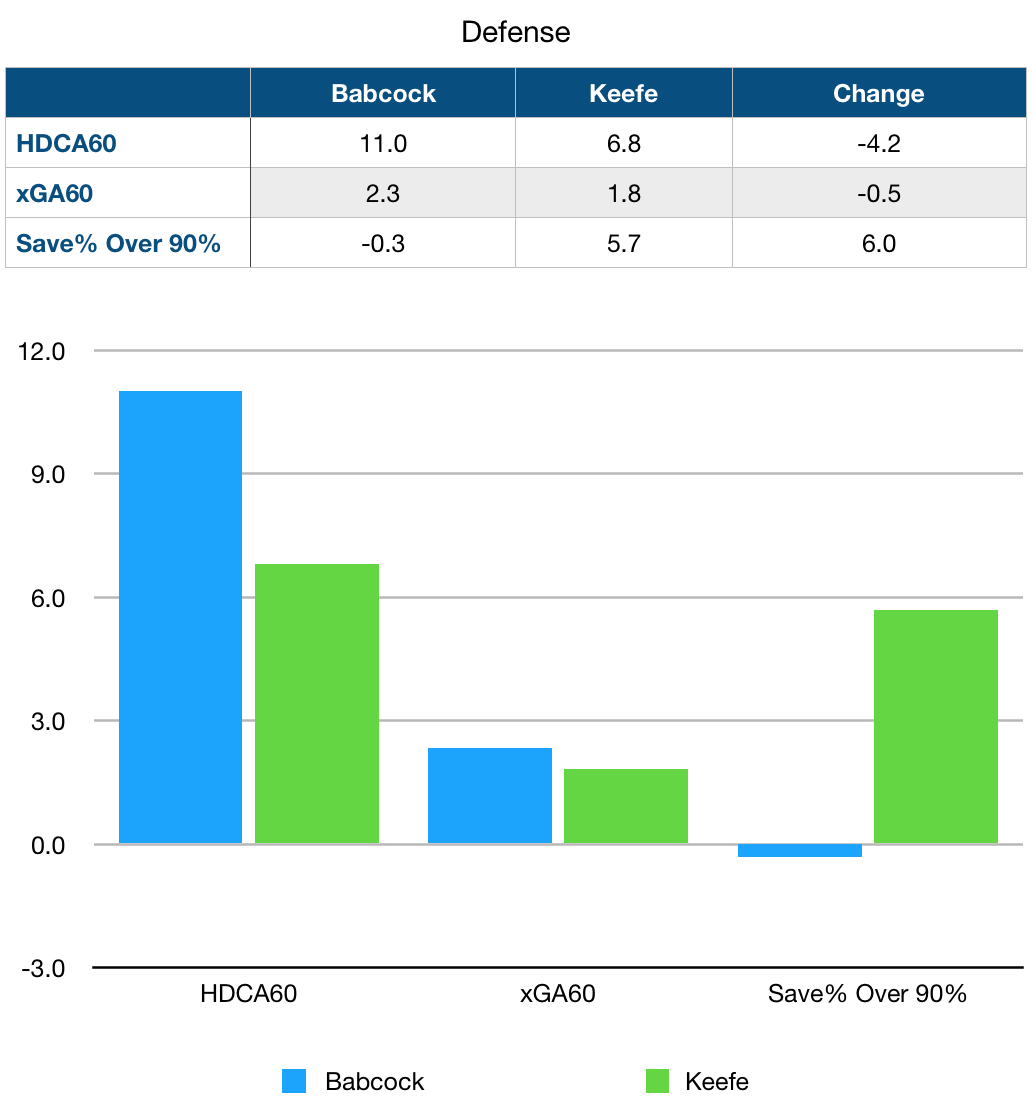 It’s extremely early to talk about special teams, but the limited results are positive: The struggling penalty kill has allowed one goal in six opportunities and the power play has gone two for three. Hopefully, that trend continues and the return of Mitch Marner next month should certainly help.

Coaches have a lot of say in player ice time at 5v5, although it can be dictated by the score, like giving the third pair and fourth line more ice time in the third period when the game was already settled. It is also impacted by how much 5v5 ice time there is to share around.

Under Keefe, there have been some distinct changes. In particular, Justin Holl and Travis Dermott have seen the largest increases, while Jason Spezza, Tavares, and Mikheyev have not been far behind. The confidence that Kyle Dubas and Sheldon Keefe have shown in Justin Holl is now paying dividends. One of the best Marlies defenders in their Calder Cup run is now pushing to play higher minutes in the Leafs’ top four.

I think there are several reasons behind Jake Muzzin’s declining 5v5 minutes, although they may be complicated. I question whether he has been 100% lately (he has had some back issues). I have also seen data that suggests he has struggled a little against more elite forwards. He is also relied on for the penalty kill, and there is a transition underway involving Barrie and the third pair’s ice time which indirectly affects Muzzin (who could probably use a little less ice time right now anyway). 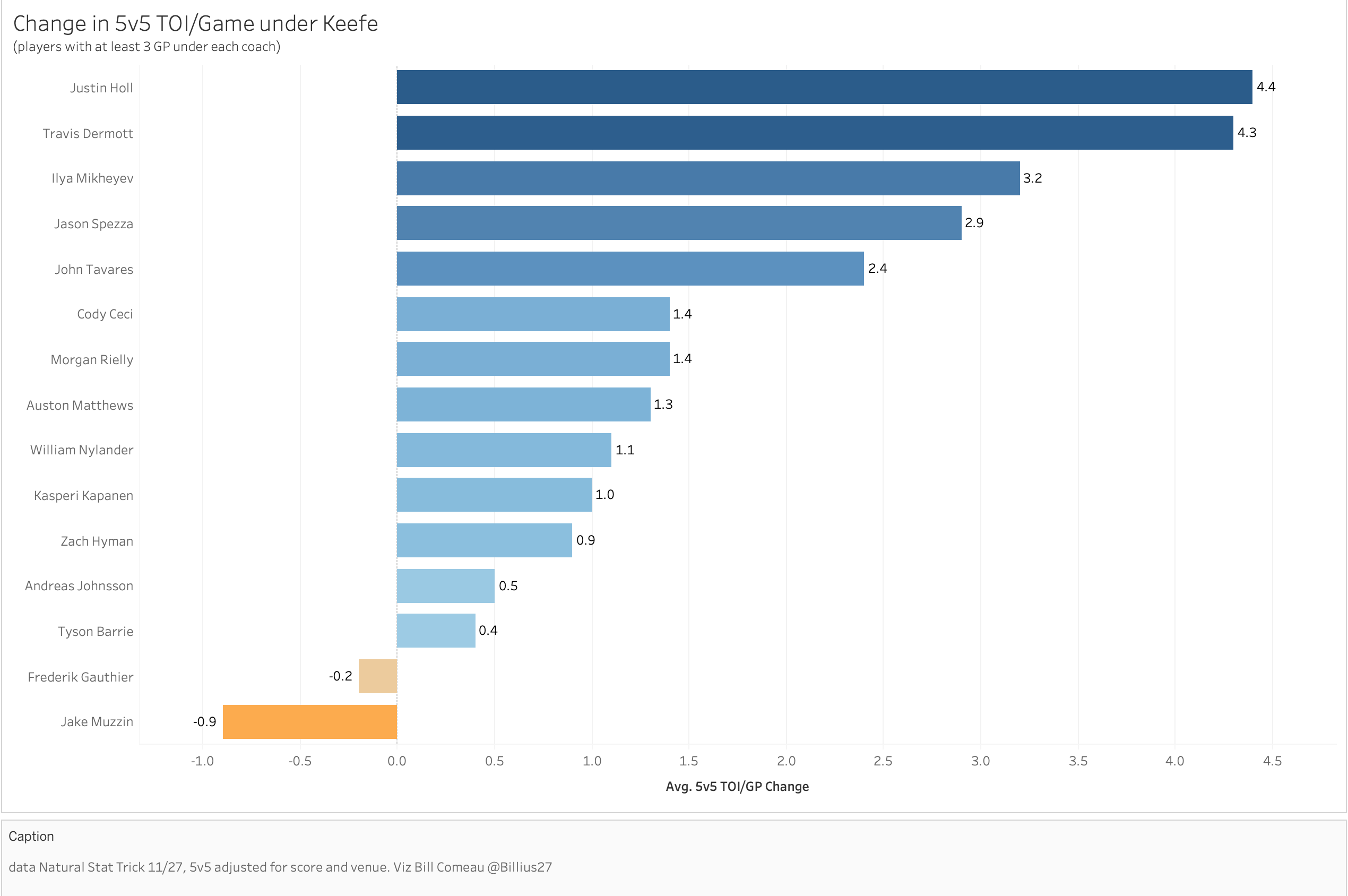 Like the team results, the xGF% by player has been much higher over these three games under Keefe. The signature story right now is Tyson Barrie. If there is one Leaf who has completely changed his play, it has to be Barrie.

Under Mike Babcock, you had the feeling he was being held back — whether at 5v5 or on the power play. Under Keefe, the defenders have been encouraged to drive play into the offensive zone and be a more active part of a five-man unit there. Barrie has also been a little more sheltered at 5v5 while getting a chance to perform on the top power-play unit.

It seems that Barrie’s offensive skill set was just waiting to be released, as shown by a remarkable 32.5% improvement in on-ice expected goal share. The whole team has been driving play better, led by the resurgence of the Tavares line. A player like Jason Spezza had little room to improve; he was already fifth in the league at xGF% relative to his team (MoneyPuck).

The story here is that the team’s improvement in xGF% is across the board; there are really no weak links. 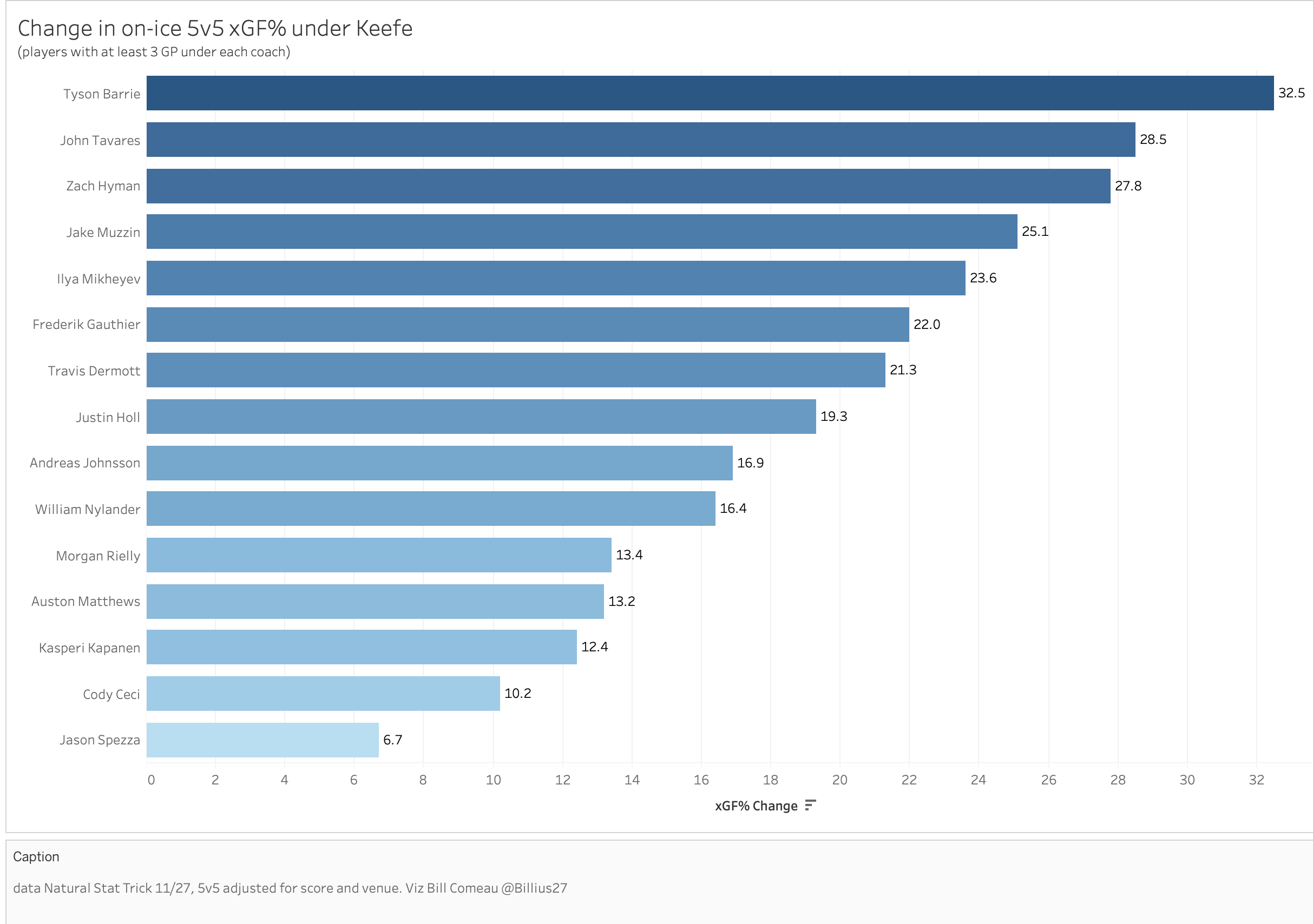 All of those fundamental improvements have been reflected in the 14-4 goal differential and scoring up and down the lineup, led by Tyson Barrie, who has scored in each of the three games.

Nylander has been outstanding as well, while Mikheyev — playing on John Tavares’ wing — has come back to his early-season form. He looks like a top-six player if he can convert a few more chances (he has hit multiple posts recently). Dermott and Engvall have also been quite noticeable under Keefe, a coach who guided their development on the Leafs’ AHL affiliate. 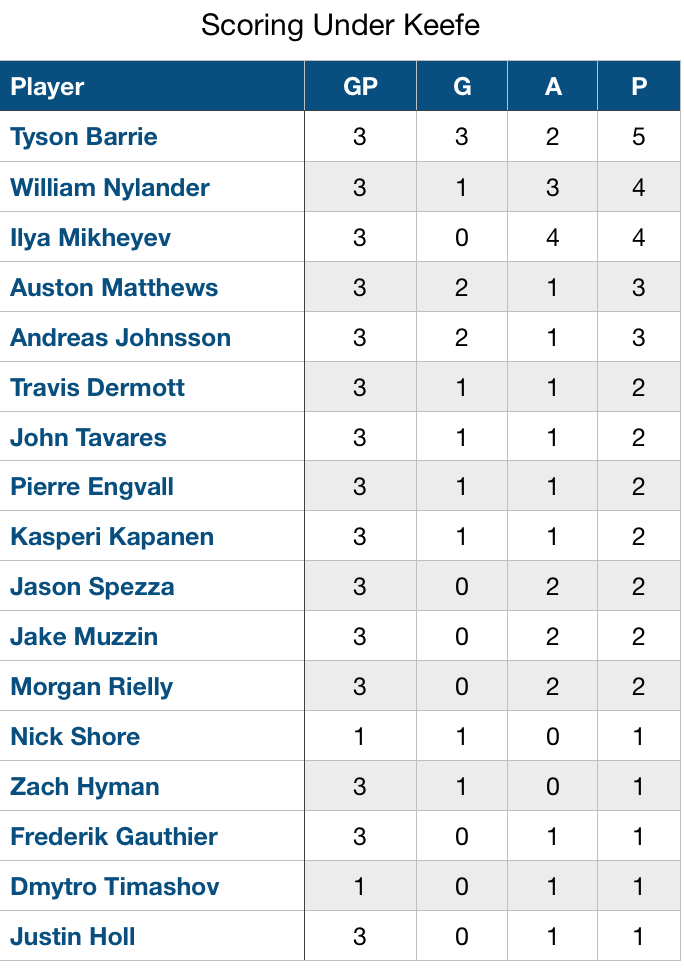 I risk being pilloried for talking about a three-game sample, but the change has been dramatic. Clearly, the team was in a funk and changing coaches sparked a revival. Whether it is a “dead count bounce” that regresses back to a middle-of-the-pack team or the sign of things to come, no one can be sure yet.

The opponents were also a mixed bag, from a potential contender with key injuries (Colorado) to an improving team in Arizona, to a tank team in Detroit. There are two Buffalo games ahead, but after that, the next test will come in early December against higher-grade opponents.

But this team just looks much better, much more organized, and much more of a 60-minute team. Every single metric has improved. The numbers don’t lie; it’s as if a weight was taken off the players, or possibly that they realized it was all on them now to show what they can do to save the season.

Captain John Tavares recently described how the team’s focus — and perhaps the identity Mike Babcock was searching for — is becoming more apparent now under Sheldon Keefe. There is no doubt that Keefe and Kyle Dubas share a common vision for the team, one based on offense, speed, and skill.

The group still has injuries and problems to solve on defense, but the general play under Keefe has been outstanding, outside of one period in Colorado. The goaltending has also been superior, as witnessed by Freddy Andersen’s first shutout in a long time last night.

Of course, all of these observations can change with one stinker of a game. Let’s hope the team finds a way to win a trap game in Buffalo Friday night and finally finds a way to get a result in a back-to-back game on Saturday.

There is still much work ahead, but the path forward suddenly looks much clearer after a promising start for the new head coach.