Home Analysis Game Reviews Game in 10: Coyotes continue to have the Maple Leafs’ number as...
Advertisement

For just the second time this season, the Maple Leafs’ big four was completely kept off of the score sheet as the strange curse against Karel Vejmelka and the Coyotes continued on Thursday night.

The Leafs controlled over 63% of the shot attempts, over 61% of the scoring chances, and over 57% of the expected goals in this game, and they held a 3-2 lead entering the third period. But they’ve now conceded seven goals and taken five penalties in the third periods of their last three games, and this time it cost them two points.

1.    It took just 46 seconds for the game’s opening goal. After a clearing attempt, Justin Holl was knocked down at the Leafs’ blue line and slid right into Mark Giordano’s path, taking both defensemen out of the play. From there, it was a clear path to the net for Nick Bjugstad, who scored on a backhand move.

Auston Matthews had a chance to make a play defensively, but at the last second, he jumped over Bjugstad’s right shoulder to try and sneak in a stick lift. If he had cut directly into the body of Bjugstad, perhaps he could have made the finish much harder on him, but regardless, it’s a strange play that caught Matthews a little off guard as the last man back after the two defenders tripped over each other. Not necessarily anyone’s fault specifically; just a very unfortunate way to open the game for the Leafs.

2.   Speaking of Auston Matthews, perhaps it’s due to him playing with a transition specialist like William Nylander — they can play pitch and catch at high rates of speed — but he has looked a lot more dangerous on the rush as of late. Around the midway point of the period, Matthews gained a head of steam in transition, made a slick move past a defender, and handed the puck off to Nylander before driving the net. Matthews and Nylander nearly pulled off a beautiful give-and-go play, but Matthews got hauled down in front, resulting in a penalty that led to the 1-1 goal.

3.   After the top unit struck out on the PP, the second unit was able to break through. The second unit is essentially an island of misfit toys on this Leafs team, but it happened to click tonight (twice in the first period, in fact).

Morgan Rielly sent a short pass to Pierre Engvall, who sent a nice one-touch pass across the ice to Conor Timmins, who put a shot on goal. The shot was designed for either a deflection or rebound, which is exactly what happened. Both Calle Järnkrok and Pontus Holmberg got themselves into a great position in front as the puck hit Holmberg’s stick in front.

The goal highlights why a functioning second unit can sometimes supply a nice change of pace. The top unit, for all its talent, can sometimes dwell on the perimeter and seek out the perfect play. Pucks and bodies to the net is a simple but effective recipe, and credit to the crisp puck movement by the second unit in the first place to create the opening.

4.    The five-forward top power-play unit did hit a couple of posts on its next opportunity a few minutes later in the first period. The PP opportunity came thanks to a really nice hard-working shift from the ZAR – Pontus Holmberg – Dryden Hunt fourth line in which they laid the body on the forecheck repeatedly and recovered the puck multiple times, with Hunt drawing a penalty on just his third shift as a Leaf.

After a faceoff win, the puck went back to Marner at the point, where he threaded the needle to get the puck to John Tavares in the slot. Tavares was able to get a good shot off from the low slot, but he hit the post.

From up top, Marner later threaded a nice pass across the high slot for a William Nylander one-timer that also rang the post. Those were a couple of near-goals that might’ve had everyone talking about the five-forward power-play unit tonight if one of those shots is an inch further to the right (both had Vejmelka beaten).

5.   The second unit once again came through late on that power play on a connection between two Leafs who are giving the team a nice boost in secondary scoring of late. Calle Järnkrok finished a pretty passing play with a snipe over the glove of Vejmelka for his third goal in his last three games. Conor Timmins — now up to eight points in 10 games as a Leaf — picked up his second assist of the period with a seam pass to Järnkrok, who crept into the slot from the point.

Timmins poise and heads-up puck movement was on display again here, and so was Järnkrok’s ability to find the quiet ice in the slot and bury on his opportunities. Järnkrok gets the puck on and off his stick in a hurry and is particularly good at shooting across the grain as a right-handed shot.

6.   After a pretty slow start to the second period, Arizona went to a power-play opportunity of their own following a bit of a weird call. As an Arizona skater went down while entering the Leafs’ zone, the refs initially called Pontus Holmberg for a trip. Coming out of the commercial break, as the teams lined up for the faceoff, the officials changed their minds at the last moment and called the penalty on Mitch Marner. To be fair, they did get the call right as Marner was (inadvertently) the offending player. But I’ve never seen an instance where the target of the penalty was changed that late after the initial call.

The Leafs went to the penalty kill and promptly conceded a goal. After the Coyotes won the draw, the Leafs’ PK immediately fanned out and never found its shape, resulting in a 2v1 down low. Justin Holl was caught in no man’s land as he tried to prevent a jam play at the front of the net but failed. A rebound squeaked free and Jakob Chychrun put it through Matt Murray‘s legs to tie the game.

7.   After a really slow start to the season offensively, Alex Kerfoot seems to be finding a home on the third-line left wing. While he’s not a line driver per se, he brings a nice complementary burst of pace and puck-transporting ability to the line. Just past the midway point in the game, after entering the zone and making a nice move to get around a defender, Kerfoot swung behind the net and cycled the puck back to the point. He then turned and headed straight for the net, where a rebound was waiting for him.

Footer on the doorstep!! 🚪 pic.twitter.com/4sxKdQHFkX

It’s a classic example of a player getting rewarded for going to the right spot, but Kerfoot’s zone entry also deserved to be rewarded on that play. Michael Bunting was parked in the right spot to turn a point shot into something much more dangerous as well.

8.    A 3-2 lead heading into the third period against this Arizona team is a scenario where two points really should be the outcome, but the Leafs found a way to toss this one away in the third period. Arguably, it’s a mini-trend that needs to be addressed at this point — even though they collected four out of six points in the end, the Flyers and Blues games also lacked enough discipline and attention to detail while in possession of the lead in the third period.

The game storyline of power-play efficiency in this game continued five minutes into the final frame. After Conor Timmins was called for a high stick to give the Coyotes a man advantage, Arizona was able to tie the game up for a second time as J.J. Moser placed a shot right under the bar and over Matt Murray’s right shoulder from the left circle.

The goal didn’t come off of a specific breakdown in structure or missed assignment but rather extended defensive-zone time off of a missed clearance opportunity a little earlier in the sequence by Timothy Liljegren.

9.   Timothy Liljegren wasn’t covering himself in glory on the next goal against, either. His simple d-to-d pass to Morgan Rielly was a little wobbly and off the mark, and in a league played as fast as the NHL, that extra second to corral the puck can be the difference between a clean passage through the neutral zone and a turnover.

From there, Rielly compounded the mistake, following up the turnover by pressing up the wall, leading to a two-on-one that Liljegren really should’ve played better as he did not take away the passing lane to Jack McBain whatsoever.

The push in the final five minutes to tie it wasn’t particularly impressive from the Leafs as they didn’t really sustain offensive-zone time or generate much at the net, and they conceded a pair of empty-net goals to seal their fate.

10.   You never want to overreact to the first game back from a long injury layoff, or a pairing that has not played many reps together this season yet. But it certainly speaks to a possible drawback with the Morgan Rielly – Timothy Liljegren pairing that we have seen signs of before dating back to last season: Rielly’s style of play can sometimes come with an uptick in odd-man rushes against, and T.J. Brodie is a partner who specializes in defending those.

It’s of course easy to second guess now, but maybe that game-deciding play turns out differently if Rielly is back with his familiar partner. We’ll see if Sheldon Keefe and Dean Chynoweth live with this little speed bump and give those two time to gel knowing the other two pairings have been in a solid place over the last several weeks, or if a change is in store for Saturday vs. Colorado.

Overall, the 2022 record against the Coyotes of 0-3-1 is certainly a head-scratcher, but it seemed like a simple case of a bit of an off-night for many of the players that have been driving the bus during this team’s highly successful November and December (in addition to some poor puck luck on a couple of posts hit and a few squandered odd-man opportunities).

The mini-trends that have emerged in the last few games that need to be addressed: the ill-discipline and attention to detail when taking care of third-period leads. Additionally, this six-game stretch of .846 goaltending (all situations) dating back to the 3-1 loss to the Rangers needs to be a little bit of overdue natural regression in net, not a sustained cliff-dive for the Ilya Samsonov – Matt Murray tandem. 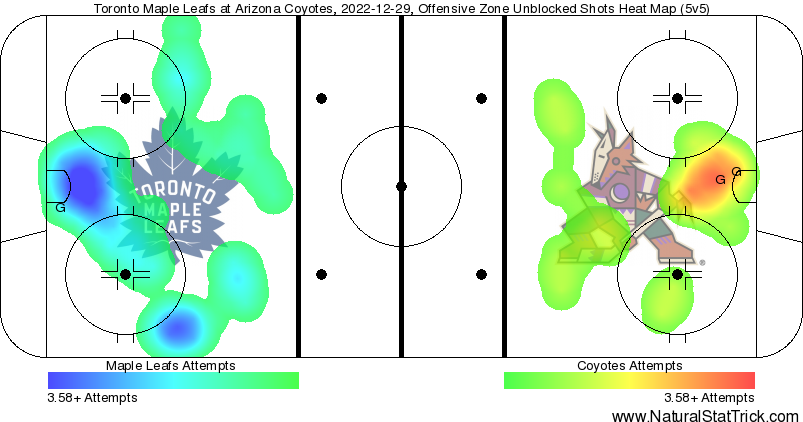