Home Analysis One good line, two controversial pairs, and one goalie: Can the Toronto...
Advertisement

That’s not very deep, is it?

I should say off the top that it is not my goal to analyze or assess a coaching staff. I don’t have the hubris to make those judgments. I simply report what I have found on the ice as objectively as possible.

There are times this team has shown glimpses of its underlying potential, such as the Boston game a few days ago. I thought they were competitive until the third period, when the Leafs‘ offense basically flatlined against a waiting Bruins defense.

Even in that loss, there were some positive signs. Auston Matthews and William Nylander continued to play well, Frederik Gauthier laid down a massive hit behind the net, and John Tavares and Kasperi Kapanen combined for a key goal.

KAPANEN BABY! It was a matter of time for him, 2-2! pic.twitter.com/gFhv20JMUA

But disaster stuck on Saturday in Pittsburgh, and unfortunately, a lot of the underlying concerns are not a new theme.

I wrote about the surprises and disappointments five games ago. Back then, I was waiting for the Tavares line-du-jour to rise up and start some delivering much-needed offense. Unfortunately, it has been incomplete all season and will continue to be for some time — Zach Hyman returned and Tavares is healthy, but Hyman was too late to play with the injured Mitch Marner.

So far this season, the Matthews line has scored 17 goals in 22 games at 5v5, 45% of the team’s total of 38. Matthews himself has nine, Nylander has six, and Johnsson has two.

At this stage last season, the top line was led by Tavares; they also scored 17 goals (Tavares 11, Marner 5, Hyman 1). This year, that trio has a total of two goals scored in 36 player-games. 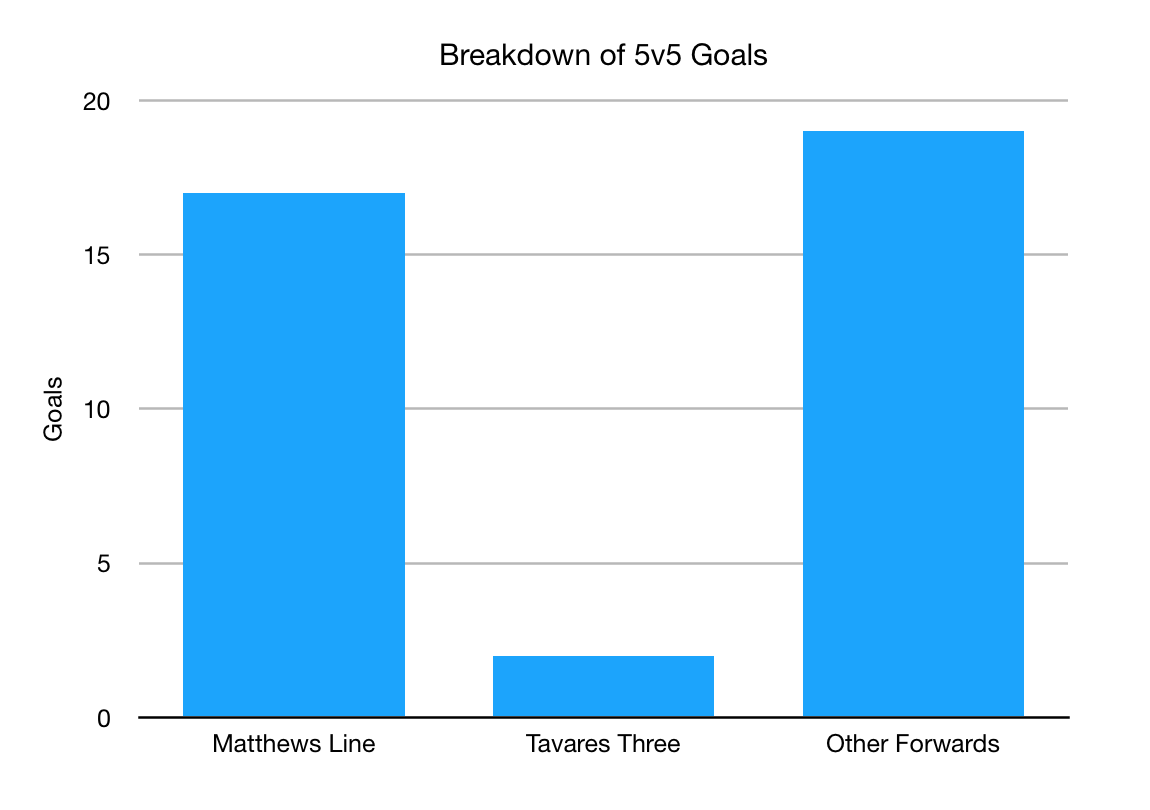 When analysts talk about the drop off in the Leafs offensive threat, this is the main reason. The Tavares line was one of the top lines in the league last season. In 2019-20, it has been hampered by injuries and those that have been healthy produced scattered results or slumps (Marner scored zero 5v5 goals in 18 games before his injury).

As of today, the Leafs sit at an expected goal share of 48.7% per Moneypuck. That’s down about 2% from last season. A contending team cannot sustain a level this far below 50%.

There is a lot of dead weight right now in the forward ranks once we get past the Matthews line. (Though Nic Petan and Jason Spezza deserve some recognition here, they’ve played fewer minutes in a sheltered role, and stand out when compared to fourth-line peers.)

Where do I start? The Tavares trio is underwater, although Hyman’s numbers are flukey after just coming back from an extended absence. The third line, led by Alexander Kerfoot when he was healthy, is also below 50%. The fourth-line rotation has simply been poor in xGF% (in part due to the defensive role asked of them). But those are awful numbers overall.

All of this leads directly to one compelling and ugly heat map comparison — the drop off in the Leafs offensive threat from last year. It was +15% compared to the league last year and now sits at -1% (heatmaps from hockeyviz.com). Look at the increased volume from the perimeter and points and decreased volume from the low slot:

All of this is why I say the Leafs have one forward line right now, led by Auston Matthews and his wingman William Nylander. And yet there are brave souls out there on Twitter saying that all this can be fixed by moving Nylander, which would be like unbuckling the seatbelt just before a crash.

With Marner and Kerfoot out for an extended period, the Leafs second and third lines are barely showing up on the radar, and the fourth line’s results are basically an anchor.

Winning games on this road trip is going to be very tough with this forward group right now unless someone really steps up. Tavares with Hyman and Kapanen might be able to help turn the ship. Let’s hope they do.

This shot map from my GameShots viz shows shots against the Leafs in only the last four games. Notice the crowd in the upper and lower slot area; I joked earlier today that it looked like a Tokyo commuter rush through a subway door.

The larger the bubble, the greater the chance of scoring. Red bubbles are the 19 goals. If anything provokes a change by the coaching staff, this has to be it. The goalies underperformed, but when it’s raining missiles, you can’t stop them all. The defense has faltered badly over the past week (the forwards and coaches are not blameless, either.)

Morgan Rielly and Cody Ceci have taken a lot of heat, and they certainly have made their share of mistakes.

This is the most Cody Ceci shift ever. pic.twitter.com/p7Tma4RySX

As hard as it might be to understand, the second pair has actually been worse once we wrestle ourselves away from highlight reels. The problem lies at the skates of Tyson Barrie more than anyone else.

The chart below shows the RAPM expected goal differentials estimated for each defenseman after running their shift level results through Evolving Hockey’s models. They basically take the data for all skaters and events on each player’s shift and attempt to isolate the impact each player has on shots and expected goals.

I mentioned this in an article nine days ago and it still remains true: Rielly and Ceci have outperformed Muzzin and Barrie by a substantial amount.  You can see how bad Barrie’s number is below, and that would certainly help drag Muzzin down with him since they play together so frequently.

I expected to see more of a positive from Travis Dermott and Justin Holl, but they are mildly negative as well. That is likely related to the fourth line issues I mentioned. The shock for a lot of people is that Cody Ceci actually has the best RAPM of the six defensemen. Remember, this metric tries to identify the impact a player has on expected goal chances at both ends of the rink.

When Ceci has played the expected goal chances have simply tilted more in favour of the Leafs. Cody Ceci is certainly more capable of exiting his zone and entering the opposition zone than, say, a Zaitsev. That doesn’t mean Ceci isn’t guilty of occasional breakdowns in his own zone that lead to goals.

I believe the chart’s message is that Ceci is likely salvageable in the top four this season.

The more dramatic problem is Tyson Barrie. He is floundering at even strength — not just in points, but in his general play-driving ability. I wrote this nine days ago:

Most are aware of Barrie’s history of defensive issues but expected a strong offensive showing to counteract them. Right now, he is well below average on the xGF/60 RAPM. That is worth monitoring.

If Barrie cannot generate and support offensive threats, the second pair is going to have a long season.

Something needs to give here, and it appears it has. The Leafs are testing new practice pairs in advance of the Vegas game on Tuesday night:

This is a major shift on the right side. The rationale probably went something like this:

On the surface, I like this move, although I have to say I am uncertain as to whether moving Holl up from a more sheltered role won’t carry some risks. He will be facing a regular dose of top opponents with either Rielly or Muzzin.

Travis Dermott has his fans (I am one) and it’s ironic he remains on the third pair while last year’s reserve moves up (deservedly, in my opinion). Handedness and obviously the coach play a part in this decision. Watching Dermott – Barrie on the third pair should be “fun,” one way or another.

I don’t think there can be much debate that the Leafs only have one NHL goalie right now. Frederik Andersen is going to be getting a heavy workload this month. In the meantime, Kyle Dubas has to figure out a better solution at backup. I’m skeptical that Kaskisuo is the answer, although I hope I am wrong.

Here’s where Andersen stands on my newly-minted goalie performance viz, which can be found here. At 5v5, his save percentage in 16 games was 91.39% — .88% below what was expected given the shot danger he faced (Remember, he did not play any back to backs). 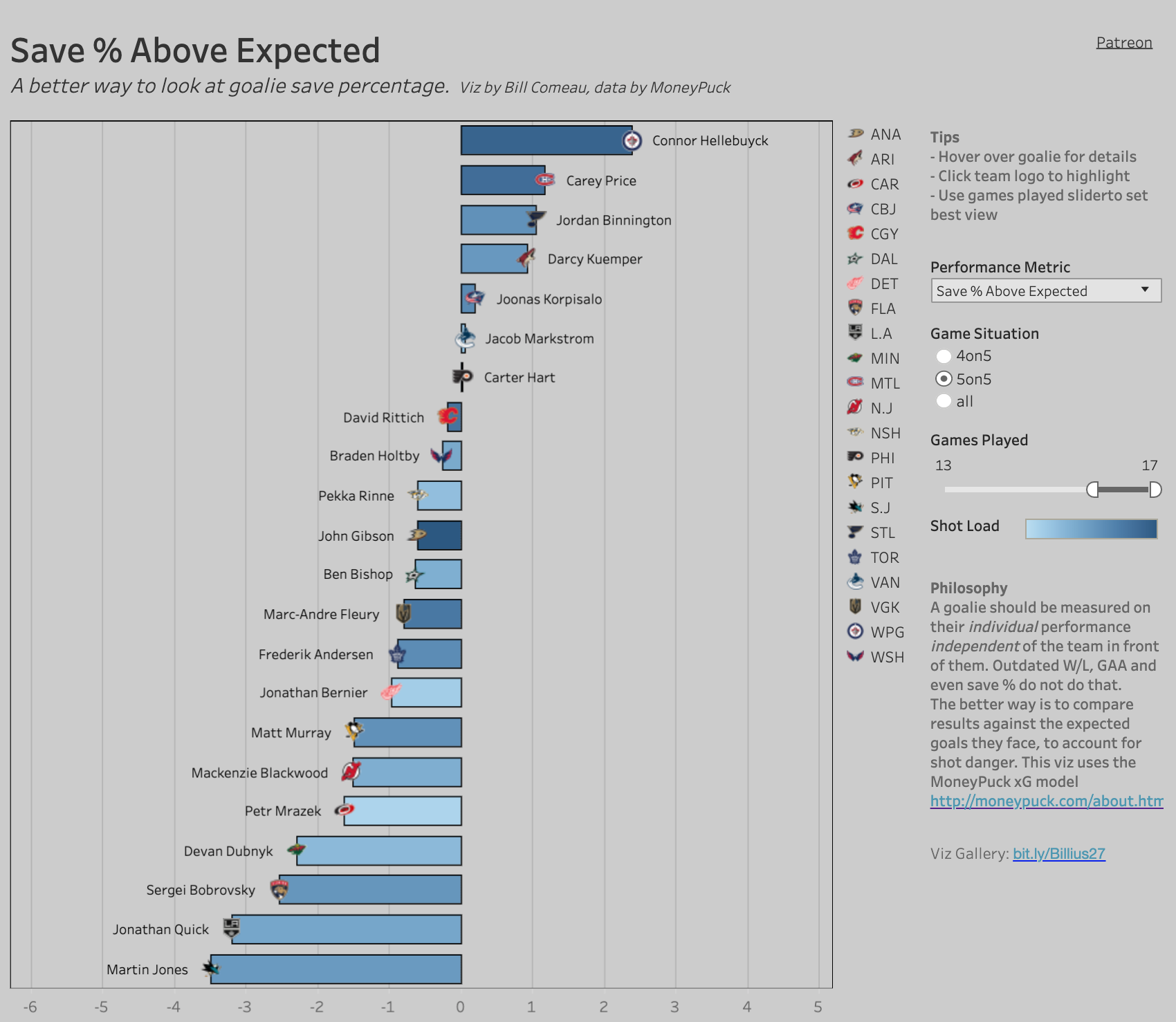 If the current version of the Leafs roster is going to stand a chance, they will need November Freddy back. His play of late has been good, so it’s entirely possible he elevates his game, much like he did when Auston Matthews went down last season.

One forward line, defense pairs not working, and a starter with no NHL backup. Fasten your seat belts and hope the team finds its way through the next month, whether they change coaches or not.