“The goal is too small and the goalies are too big.”

Scotty Bowman said that years ago. It still holds true, and yet somehow there is an elite class of hockey players that routinely do what few others can do: score a lot of goals.

Note: The data for this piece is as of before the games on November 26

This is a story about the top goal scorers in the NHL. But it is especially a story about Auston Matthews and why he is a very special scorer. As Leafs fans, we need to pay attention to a talent like this despite all the distractions these days.

Even in his first NHL game on October 12 of 2016, Matthews showcased elite skills — the way he threaded the puck through defenders, the pinpoint accuracy of his deceivingly quick release, his stick thievery, his ability to score on the rush or in a crowd, and his unique ability to fire a shot while shifting weight from one skate to the other.

To better appreciate where his skills have brought him since that first game, let’s take a look at his closest comparables and see where he stands today.

Right now, David Pastrnak is leading the world’s best hockey league with a blistering 71-goal pace. Auston Matthews is not far behind with 16 goals and a 52-goal clip. Most of the names on the leaderboard with him are familiar names; they repeatedly rise above the other 400+ NHL forwards, all aiming to reach the summit. But who is the best goal-scoring talent? Is it the one topping the leaderboard or someone else?

Last February,  I laid the framework for a new NHL “Scoring Power Index” in my personal blog. In many ways, this is an update on that original story. It was written to mark the significance of Auston Matthews’ contract signing and his 100th goal.

If I am being completely honest, I was also skeptical about the size of Matthews’ contract and wanted to see if my doubts were justified.

It isn’t every day that a franchise gains an elite goal scorer, though several young stars have emerged over the past few seasons, including Patrik Laine, David Pastrnak, and Leon Draisatl.

How do you compare the top scorers and do them justice? Alex Ovechkin is a perennial Rocket Richard favourite and is a fixture on the Washington power play. What a shot!

He passes Luc Robitaille for 12th on the all-time list. pic.twitter.com/9o4u8Aw9Ne

David Pastrnak on the power play. Automatic. 15th of the year for the spaghetti man. pic.twitter.com/3qZLMw12zk

And of course, Leafs fans are well versed in Auston Matthews’ even-strength wizardry — he can stick handle in a phone booth and has developed new ways to deceive goalies with his snapshot release. Here’s an excellent summary of Matthews’ scoring skill by Craig Button and Mike Kelly for The Point:

The eye test is pretty compelling with these elite shooters.

I came to the conclusion that the only way to fairly compare them is to move past the traditional NHL leaderboard and find a way to standardize their usage over several seasons.

Fortunately, we now have over three seasons of evidence and a large sample of goals to make these comparisons. This is important because goal streaks and slumps in shorter timeframes can bounce up and down (just ask Patrik Laine).

Here is a chart of the top goal scorers since the start of the 2016 season when Auston Matthews entered the league. Alex Ovechkin is far ahead of the pack with 148 goals, followed by Connor McDavid (130) and Nikita Kucherov (128). The next tier has the current season leader David Pastrnak, his linemate Brad Marchand, and Auston Matthews in fifth place with 127 goals. Further down the list, we can find the Leafs‘ second center, John Tavares, sitting in eighth spot with 118 goals.

It’s unusual to see two centers from the same team ranked so highly. Even McDavid and Draisatl have played a significant amount of time on the same line. Matthews and Tavares center different lines, and that’s also fed into debates about Matthews’ ice time. It reminds me of the time my mom asked her three kids how much of the ice cream we wanted, and we all said “half.”

This is a good starting point, but each of these top 12 scorers has played a different number of games, a different number of total minutes, power-play minutes, and even-strength minutes. Some have also had more opportunities to slide in an empty-net goal. Of note, Auston Matthews has the fewest games played (237), the lowest ice time, and the fewest empty-net goals (1) among the top-12 scorers.

My earlier blog, which I mentioned and linked at the top, goes through the gritty details and the formula I used to standardize the goal scoring. Here is a quick summary of the steps I took:

1. Remove empty-net goals and label the revised number goals* to remove noise that isn’t really true goal-scoring talent.
2. Split total goals* into even strength, power play, and shorthanded goals.
3. Convert each to a goals* per 60 minutes version to make it a level playing field.
4. Blend each scorer’s goal rates by the average ice time by strength for the top 12, so each player’s ice time splits are set to the Top 12’s average usage profile.
5. Call the final index “Scoring Power Index”.

You can see from the table that although there are not many empty-net goals, certain players like Brad Marchand (9) and Patrick Kane (9) do score on an empty net more often. You’ll also see that under Mike Babcock’s coaching style, Matthews only has one empty-net goal in his career. I removed all the ENG’s and labeled net goals with an *.

David Pastrnak has now emerged as the top power-play specialist over the last three and a quarter seasons. 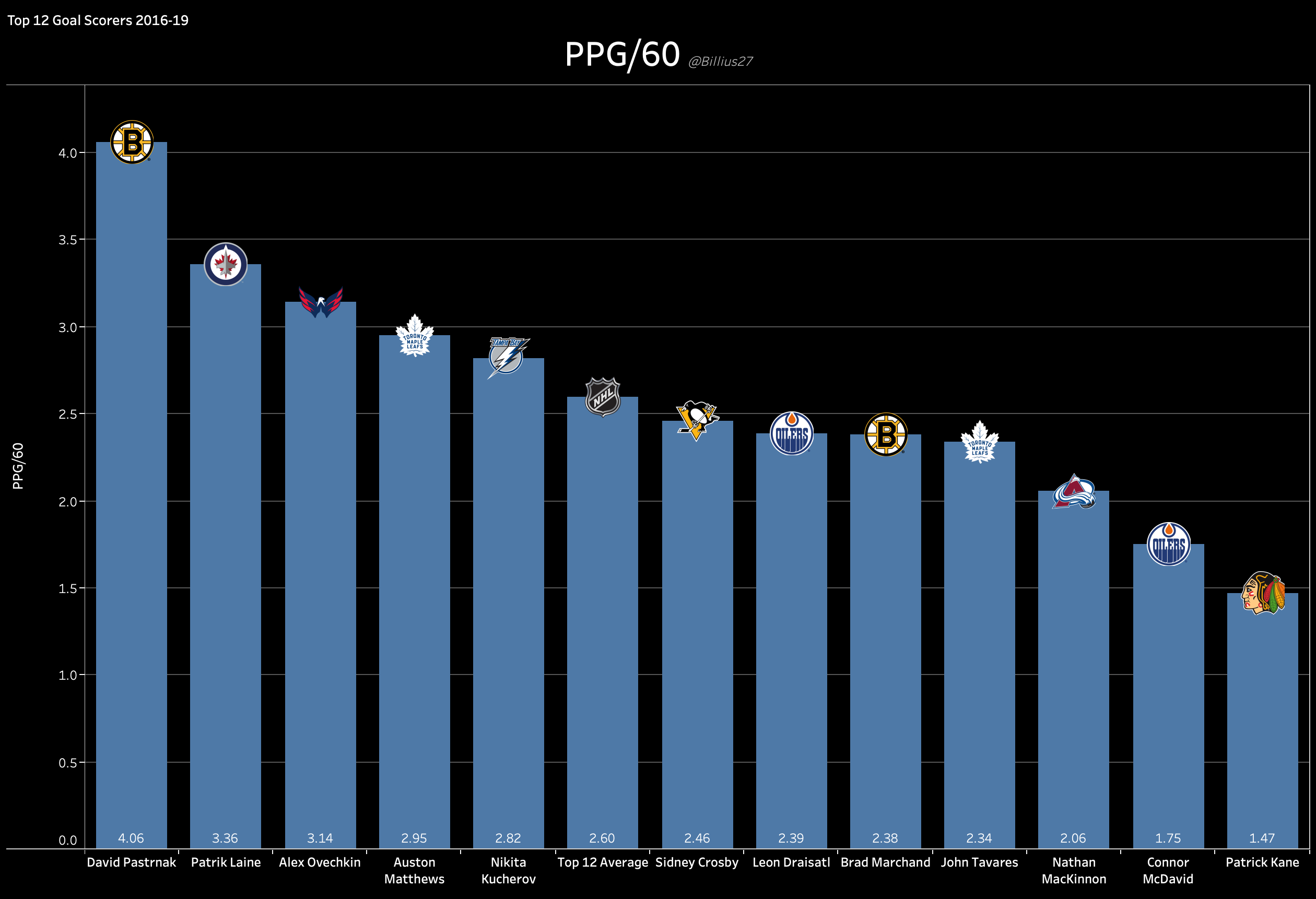 Most question why Ovechkin would not be at the top but the simple answer is that he has received more ice time on the power play than anyone else. 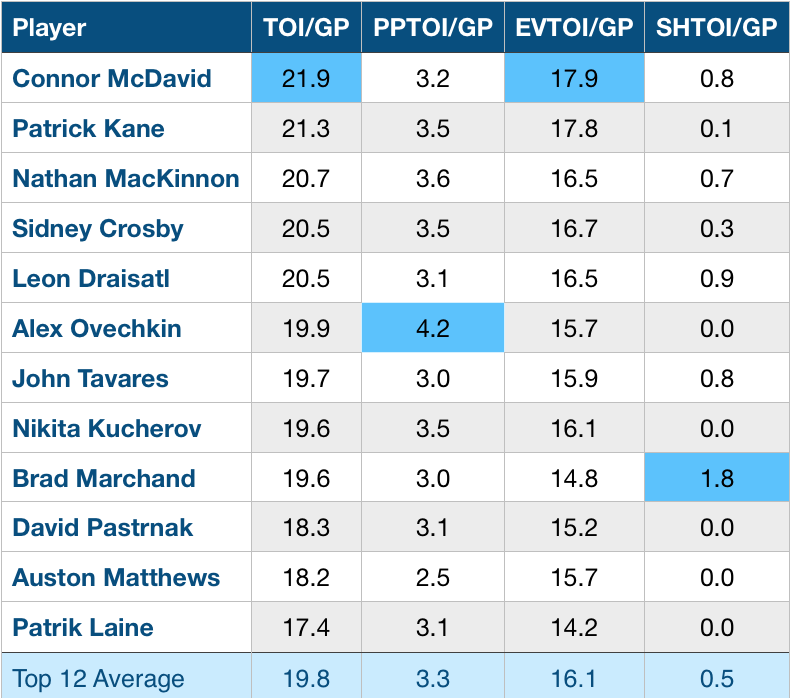 Two of the most prolific scorers in the game, Pastrnak and Matthews, are actually near the bottom in total ice time per game.

Here is the percentage of time Matthews spends on the power play compared to Ovechkin. 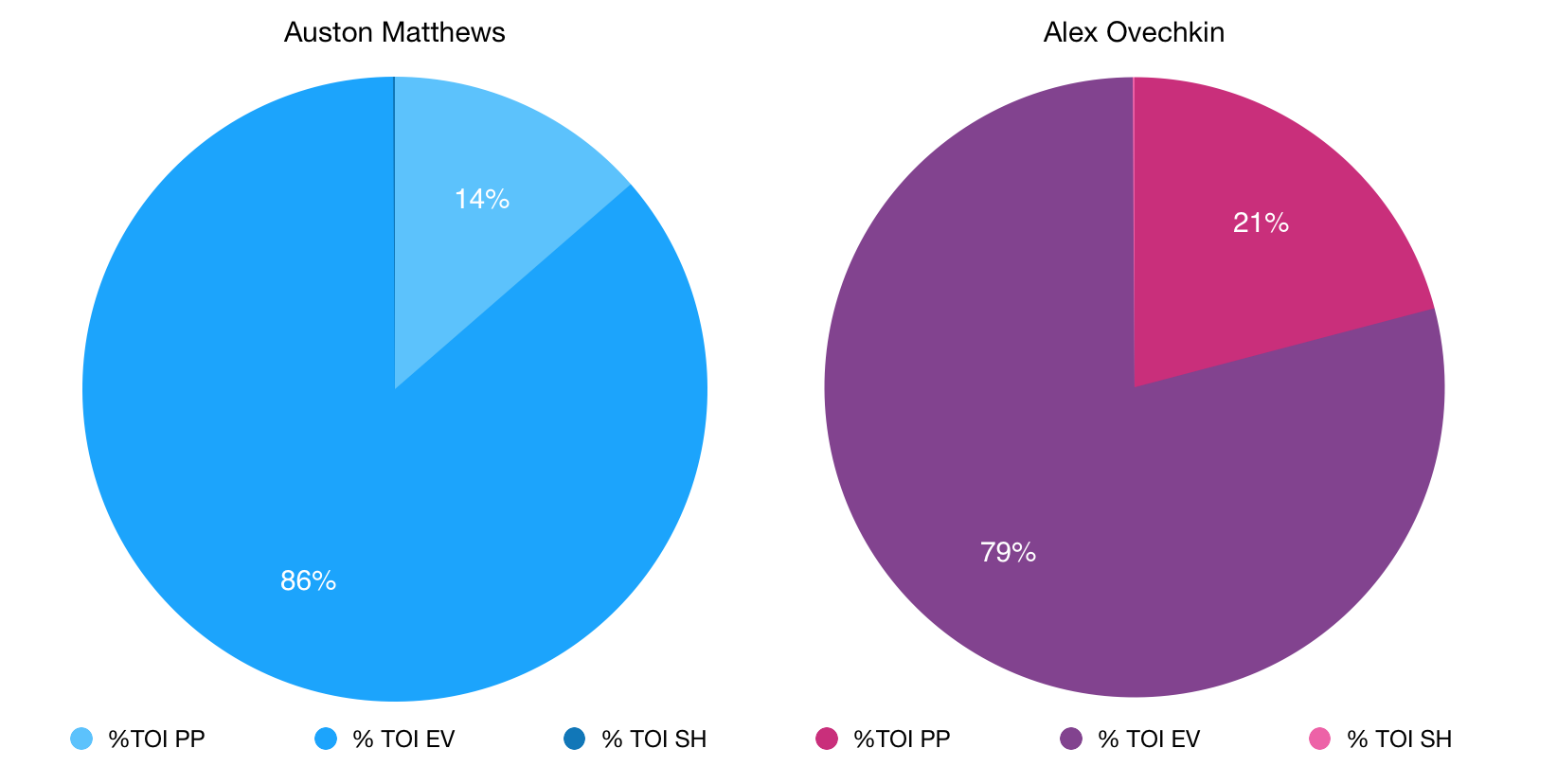 Since the first game of the 2016 season, Auston Matthews has shown an elite ability to score at even strength. Once we adjust for his ice time, he leads the second-best scorer Brad Marchand by a wide margin, scoring at a rate of 1.56 goals per hour. If Pastrnak stood out from the field on the power play, Matthews does the same at even strength. Another Leaf, John Tavares, is just behind Nikita Kucherov and Connor McDavid.

This season Matthews continues to exploit his elite shot and mitts near the net, MoneyPuck has him at 5.4 expected goals at 5v5 but he has actually scored double that with 11 goals. You could argue it’s shooting luck, but his shooting percentage consistently ranges between 14% and 18% each season. Regression to the mean for Matthews is just regressing to an elite level.

Stars such as Ovechkin, Crosby, and MacKinnon are all in the second half of the group. 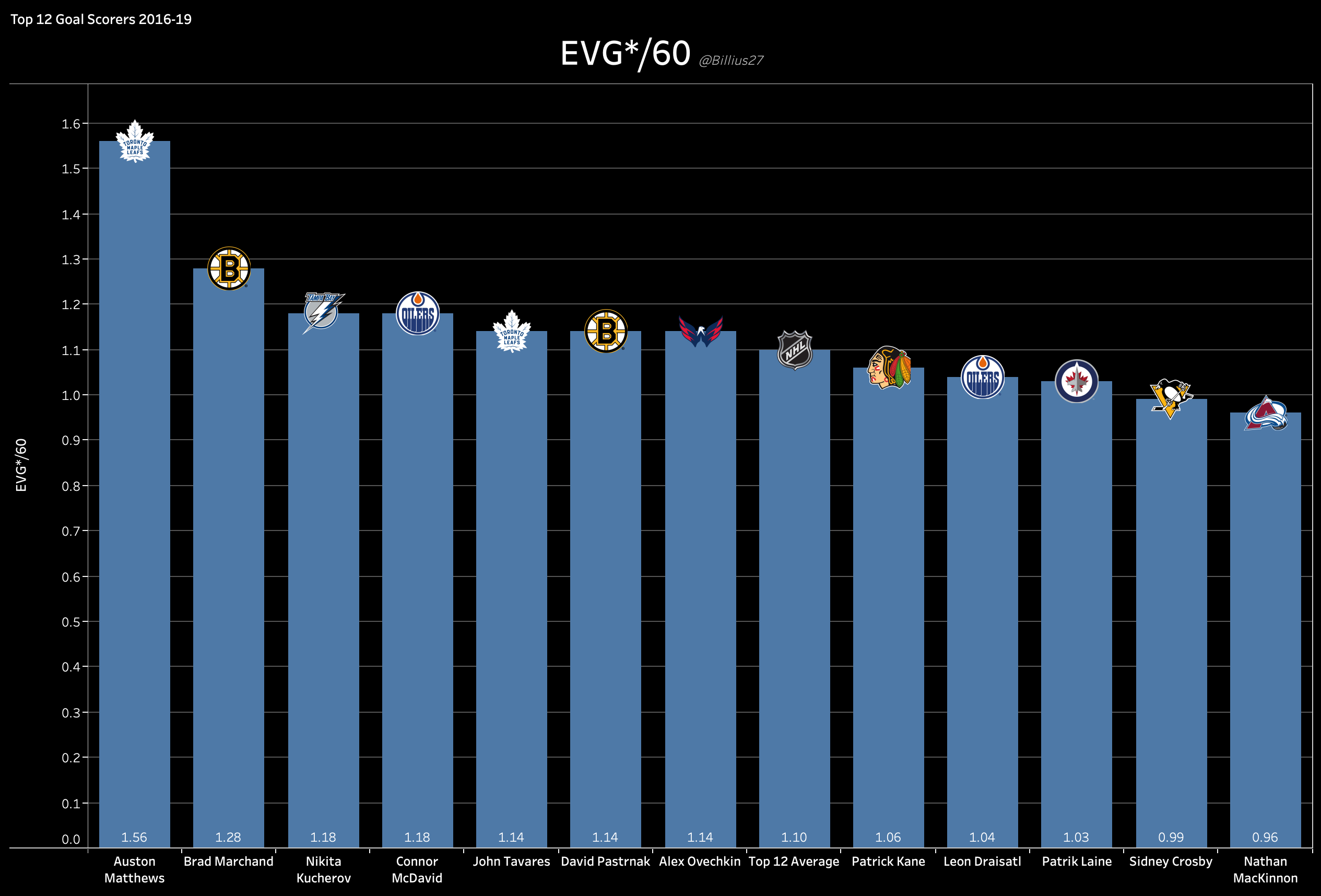 The final step is to integrate what we have learned into an overall index. To do that, I have weighted each player’s ice time at even strength, the power play, and shorthanded by the top 12 average splits.

Now we can look at scoring production much more clearly, with each scorer given the same share of power-play time, with noise like empty-net goals removed, and with scoring rates helping to eliminate confusion over games played and coach usage. 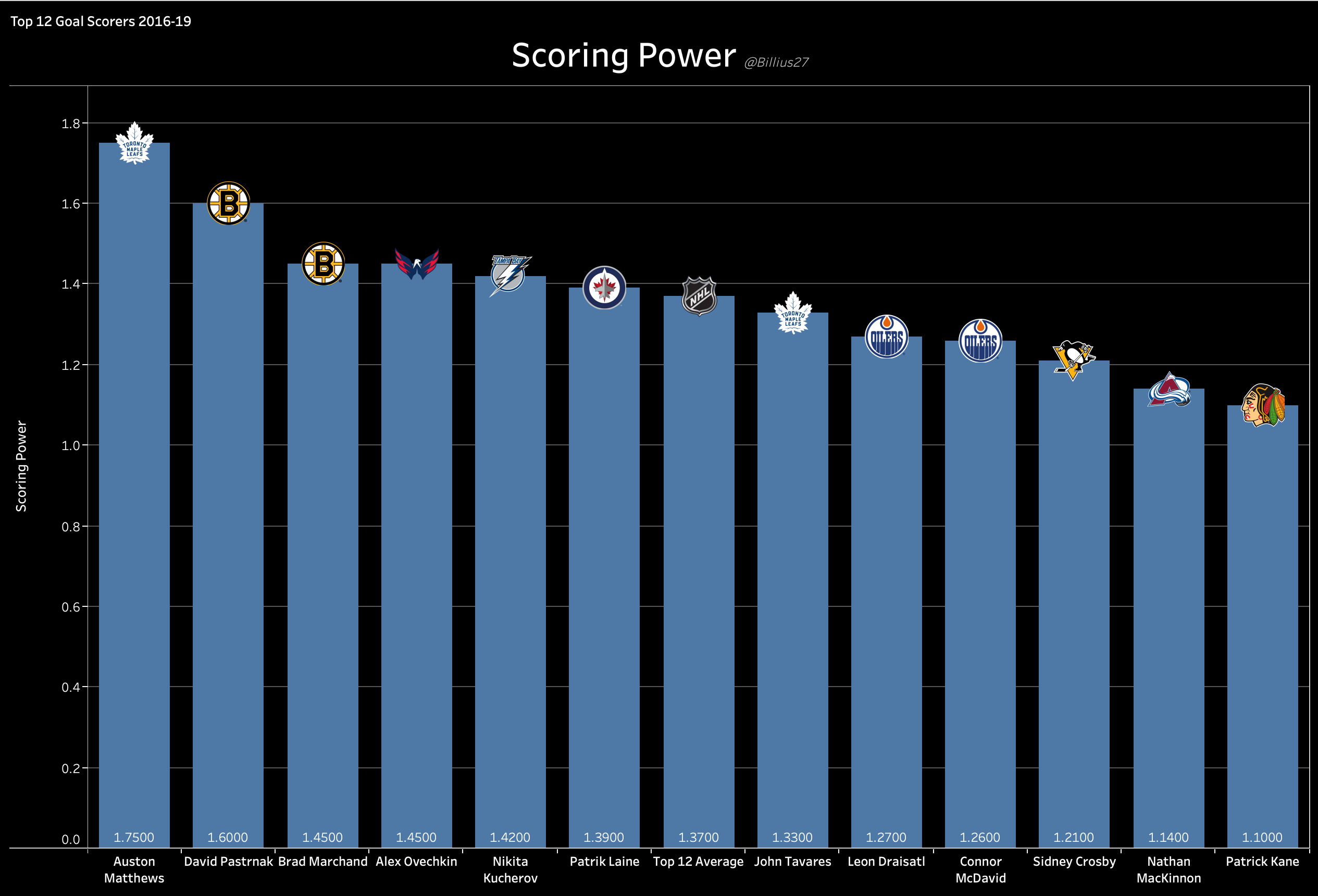 The leader in Scoring Power since the start of 2016 is Auston Matthews with a blended rate of 1.75 goals per 60 minutes.

He has dropped slightly from my first workup back in February (1.81). But he still maintains a sizeable lead over the runner-up, David Pastrnak (1.60). Pastrnak’s hot streak has helped leapfrog him over Laine and Ovechkin, who held down the second and third spots back in February.

Fellow linemate Brad Marchand clocks in next with a 1.45 rating, tied with the leader in actual goal counts, Alex Ovechkin. Matthews’ teammate, John Tavares, comes in 7th (1.33) over the 2016-19 span.

Although Connor McDavid and Sidney Crosby rank further down this Scoring Power list, they bring many other things to the game besides goal scoring — things I think most hockey fans appreciate and understand.

What does this all mean in a nutshell? Every one of these top-12 goal scorers brings elite skills to the rink. However, if you are a coach and you get to pick one star to add to your roster, Auston Matthews would give you the best chance at a goal, assuming the coach played him at the average usage of all the other top 12 scorers.

At the end of the day, I am satisfied that Auston Matthews is full value for his contract. If he can remain healthy, the upside is still there over the coming years, particularly given his age and if he enjoys more power play time, a superior power-play unit, more even-strength ice time, and higher quality linemates (I’m referring to the quality of teammates that Pastrnak, MacKinnon, and McDavid have).

As I said at the outset, don’t become too distracted. One of the best (I would argue the best) goal scorers in the world suits up for the Leafs every game.

Leafs finally score on the 6th PP. What a bullet. 1-1. pic.twitter.com/LGtEQYHqIp

The way Matthews drifted patiently and deceived the goalie here is masterclass material.

#AustonMatthews rips one through a screen while moving laterally. He loads up and does his typical pull in towards his body before shooting.#TorontoMapleLeafs pic.twitter.com/V9q2Q3iTgP

Be sure to enjoy the wizardry of Auston Matthews real time. Soon enough, we will be looking back at this time and talking about the legend and his early years.

NOTE: You can find the working version of my Scoring Power Viz at http://bit.ly/Billius27.