As the Toronto Maple Leafs look to bolster their defense, trade targets are popping up everywhere, reminding me of the player-tracking demo at the NHL All-Star game. With those names come the realities behind their availability.

Bob McKenzie described what he thinks the Leafs are looking for a few days ago:

“I do think the Leafs are looking, but I think it is a very specific need. I think it is a right-shot D or a left-shot who has a lot of experience of playing on the right side, and it is also somebody who has a significant amount of term on his contract — and by significant, I would probably say the low end of the bar would be what they did with Muzzin.”

The cost would be significant — most likely Andreas Johnsson or Kasperi Kapanen, or possibly Alex Kerfoot, as Bob McKenzie mentioned (though I personally doubt a Kerfoot trade is likely given the importance of the 3C position on the Leafs). I wrote in-depth about the trade prospects of four Leafs ‘second-tier’ wingers during the bye week here and here.

Matt Dumba is a 25-year-old right shot offensive defenseman for the Minnesota Wild who is best known for his speed, mobility, and great shot. He has three years left on his $6M contract after this season.

Last season, Dumba put up a scorching 12 goals plus 10 assists in 32 games before surgery for a torn pectoralis muscle ended his season abruptly. This season, he has played in 50 games and has recorded only three goals and 16 points.

One of those goals came at the very start of the season.

Make it ✌️for the @mnwild!

43 seconds apart. This time it's @matt_dumba.

His low production coming back from surgery plus zero goals in his last 32 games has raised the level of trade talk in Minnesota.

Michael Russo of The Athletic put it this way a few days ago:

“At 25, can Dumba rediscover being the sharp-shooting blueliner he once was? Or is he playing so poorly right now that you’re trading him to a team that’s buying him on the low?”

You can certainly see here that his point production and ice time have fallen — so much so that he has fallen to the lower end of second pair ice time in Minnesota.

But is it only his point production? Let’s take a closer look at his overall five-on-five play.

Although his goal scoring rate has fallen off from a career season last year, you could argue that it’s not that big a surprise; he was riding a shooting percentage at the 98th percentile last season and that was a streak that was simply unsustainable.

But his play this season has fallen dramatically in areas outside of his box score numbers.  That’s what should concern buyers more (and also lower his trade value given his cap hit of $6M).

Keeping in mind that SKATR’s bars highlight five-on-five percentile rankings, here are some year/year areas to note with percentiles in square brackets:

Besides SKATR, I love to review the isolated player heat maps produced by hockeyviz.com (they are behind a Patreon paywall). Micah uses his advanced Magnus 2 model to map isolated shot threats on offense (top) and defense (bottom). Here is some background on the model and heat maps for those not familiar.

In the case of Matt Dumba, we can better visualize the deterioration in Dumba’s game: the offensive contribution at the top is -4.6% below league average while the defensive side has worsened to +15.1%. (A positive number means allowing greater threat against your own net.)  The red areas highlight where the threats are greater. You can see that Dumba has difficulties reducing chances near his net.

I added some history because I wanted to highlight that this pattern has been roughly the same every year, especially on defense. For a mobile defenseman, you can expect some give in the D-zone along with a positive impact in the offensive zone. That doesn’t really happen with Matt Dumba — his strength is more in his shot than the creation of threats. 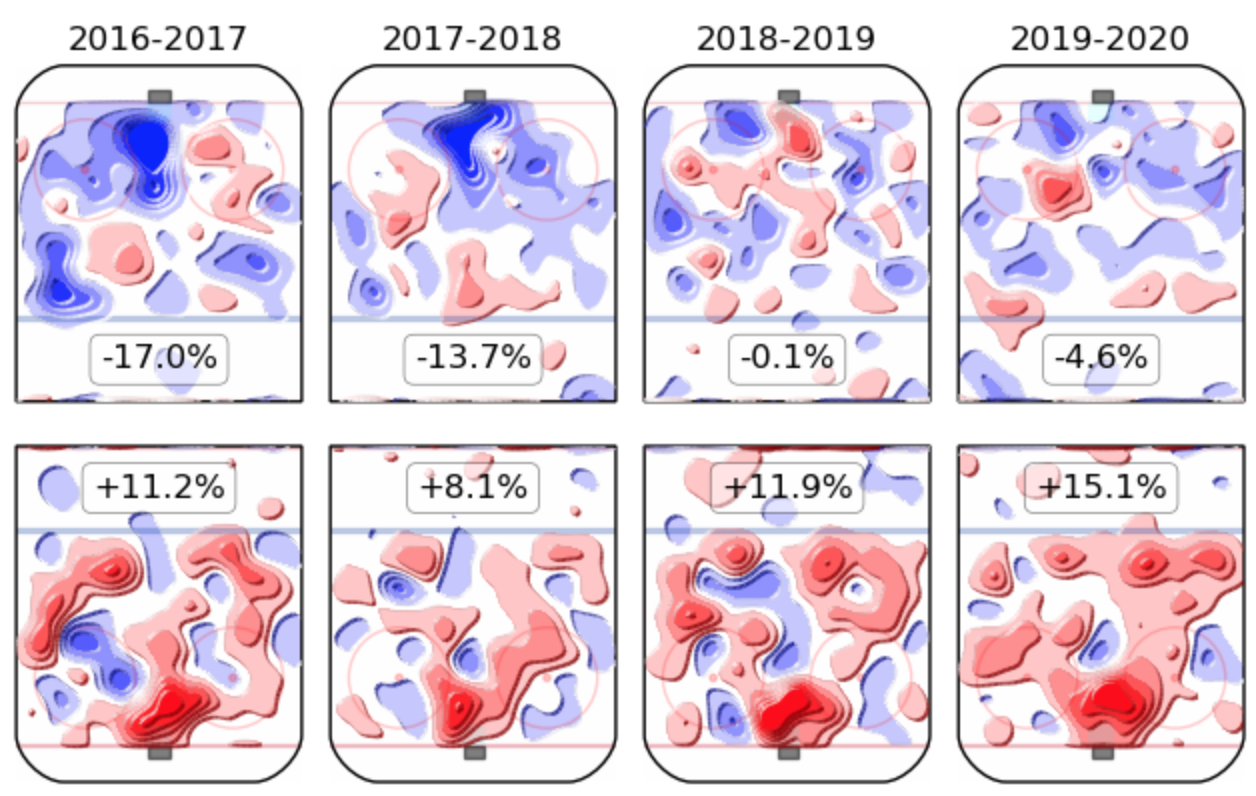 Matt Dumba fits the mold of an offensive defenseman with a great shot, but it can come at a cost, as shown by his two-way and defensive play so far this season. I see parallels to Tyson Barrie in many ways. When they are on top of their game, scoring goals, utilized on the power play, with good teammates, and sheltered more on defense, they can contribute.

The risk for buyers is evident in his SKATR profile for this season and the heat map history I showed. Whether his injury has played a role, or his usage, or some other factor, these are things teams like the Leafs will need to decide and investigate with full scouting and analysis.

However, as an analyst, I see a lot of downside risk, especially for Toronto, where finding a defensively-capable RD partner is critical. For that reason, I would not recommend that Kyle Dubas targets Matt Dumba for the Leafs blue line.