After a lifeless opening period, the Maple Leafs rediscovered the sound team game that won them so many games in November and December in the final 40 minutes of this 4-1 win over the Red Wings.

Following a few games in which their defensive game and goaltending slipped, the final two periods of this game were just what the doctor ordered for the Leafs. It’s true the Red Wings were on the second half of a back-to-back, but a team needs to take advantage of the opportunities the schedule presents over an 82-game season, and the Leafs did exactly that on Saturday night.

Remarkably, the Leafs have now won nine straight in regulation against the Red Wings dating back to October of 2019, outscoring them 48-21 over this run.

1.    This game started quite slowly. Both teams were feeling it out in the first few minutes, although Detroit seemed to have more urgency in their game and generated the better of the chances. There were a few defensive-zone turnovers that directly led to Red Wings’ shot attempts. The game never really opened up in the first — the lone exception came at the conclusion of some 4-on-4 play.

After coming out of the box, Jake Walman snuck away in the neutral zone, and neither of the Leafs‘ defenders in Mark Giordano or Justin Holl noticed him lingering in behind them. From there, it was an easy breakaway pass, and Walman ripped a shot past Ilya Samsonov to open the scoring.

2.   That was the lone goal in the first, and honestly, it was pretty much the only noteworthy event in the period as well. The Leafs struggled to execute quickly and cleanly enough with their skating and puck movement through the defensive and neutral zones to sustain any significant offensive-zone pressure. It felt a lot closer to the final 40 minutes against the Kraken than Sheldon Keefe would have liked.

Toronto appeared to lack intensity and urgency in their game early on, which played right into Detroit’s hands in their second game in 24 hours, which can sometimes give the tired team a chance to jump on their opponent early before the exhaustion sets in with the long change in the middle frame. The only time the Leafs were able to generate much of anything in the first was either when William Nylander slicked through the neutral zone or the John Tavares line created a half-look off of the cycle. Chances were few and far between.

The Leafs stayed within one, though, and were just one spark away from turning the game around.

3.   Fortunately, the final 40 minutes were a much different story for the Leafs. They converted an early man advantage opportunity into a big turning point in the game just 24 seconds into the period.

After an Auston Matthews one-timer went wide, the puck bounced off the end boards right to Mitch Marner, who fired it home from an acute angle to tie the game. That goal also served as Marner’s 500th career point, becoming the second-fastest Leaf to accomplish that feat behind only Matthews.

Both Marner and Matthews have a good shot at reaching the top 10 in all-time franchise scoring by season’s end (Rick Vaive is currently 10th with 537), all before turning 26 years old. Can’t be taken for granted.

4.    The long change and more urgency to the Leafs’ execution helped fire up their transition game in the second period, and Toronto started to find traction with some good sequences where they controlled play and dictated the pace shift over shift.

Mark Giordano sent a stretch pass up to Calle Järnkrok at the Red Wings’ blue line along the boards, where Järnkrok drew the attention of the Detroit defender on his side of the ice. With the middle of the ice left wide open, John Tavares drove the middle lane and took a little backhand feed from Järnkrok. In all alone, Tavares showed off some sweet hands for a pretty finish.

After a stretch of just eight points in 14 games, that’s goals in back-to-back games Tavares — and this one came at five-on-five after Thursday’s power-play tally. You’re hoping games like this against a vulnerable opponent can serve as a springboard for slumping scorers, and the second line found some life after a quiet stretch of games at even strength.

It wasn’t a case of the top line having to lead the way at five-on-five with even-strength goals from Tavares and Pontus Holmberg.

5.    After the Tavares goal, the Leafs really started to pour it on. There was a good five-minute stretch without a whistle in which the Leafs created several great chances that were turned away by Magnus Hellberg.

The Leafs kept the momentum rolling with some impressive complimentary play. The transition offense was a lot more dynamic, and there were some great plays off of the cycle in the offensive zone. Any time the Wings got a puck out, Toronto was able to recover it and get right back on offense.

In a lot of ways, this looked like a return to form for the Leafs; the team structure arguably looked its most solid since the holiday break. They did an excellent job forcing the Wings to the outside and creating turnovers in the neutral zone. When Detroit did gain the Leafs’ zone, Toronto’s defensemen were efficient at quickly turning puck retrievals into clean zone exits.

6.    After a first period that was maybe not the most flattering for his pairing, Timothy Liljegren really turned it on in all three zones, showing excellent composure and making the right play consistently. Offensively, there were a few instances of Liljegren’s poise walking the line, and there was also a beautiful one-touch pass through the middle of the ice to Auston Matthews that stood out.

Defensively, Liljegren also looked sharp, particularly in transition. At one point, the pacey Dylan Larkin tried charging through neutral ice against him; Liljegren stayed composed, showed some great gap control, and poked the puck off Larkin’s stick before delivering a big hit.

7.    Toronto’s structured play led to a relatively low-event third period, although the Leafs still generated a fair amount of offense. They finally put an insurance goal by past Hellberg off of a Morgan Rielly point shot that was deflected by Pontus Holmberg in front.

This goal was earned by a fourth line that’s really come on as an energy presence as of late. Holmberg, Dryden Hunt, and Zach Aston-Reese are playing fast, physically, and getting after it on the cycle. Holmberg, especially, is establishing himself as a model of game-in-game-out reliability on the fourth line.

This line didn’t allow a single shot or shot attempt against when all three were on the ice at five-on-five.

8.    Speaking of Morgan Rielly, we saw Sheldon Keefe and Spencer Carbery move away from the five-forward unit in the final 40 minutes and restore Rielly at the top of the first unit.  Given the power play generated little in first period following an unimpressive 1/5 game vs. Seattle, you wondered if the coaching staff had seen enough.

That said, we have seen them pivot back to 4F/1D when a power play is close to expiry, and there were less than 40 seconds left on the early second-period power play that the Leafs scored on when the period started. The power-play opportunities in the late second and early third came with the Leafs in the lead. Maybe it’s purely circumstantial; we’ll see if they stick with it next time out when tied or trailing in games, but it makes sense to deploy it situationally.

9.    As mentioned earlier, this was a return to form for the Leafs, and one part of that was Ilya Samsonov‘s bounce-back effort between the pipes. Some of it has to do with the team defense returning to from in front of him — he faced just 23 shots against — but he looked more composed in the crease on Saturday night compared to his previous couple of appearances. He is a pretty active goalie in his crease and always will be, but his aggressive instincts were channeled properly and married to sound technique tonight.

He was big and square to the puck a lot more often and was rarely caught flailing around in the crease, which kept him in the fight on second and third opportunities.

what a save from Samsonov pic.twitter.com/xibcha1ZHH

After four straight games below .900, Samsonov — and the Leafs — needed this one.

10.    As the game drew closer to its conclusion, the Red Wings really struggled to pierce the Leafs’ neutral-zone defense. Despite pulling the goalie with three minutes to play, they never were able to generate anything substantial offensively. Eventually, one of the Leafs’ clearing attempts got kicked out of the air by Mitch Marner right onto the stick of John Tavares, who put his second of the night into the empty net to give us our final score of 4-1.

It was far from the most entertaining game in the world, but this was a performance the Leafs needed given their mixed results and marked increase in goals against since the holiday break: A solid final 40 minutes built on a sturdy defensive foundation, resulting in a fairly low-stress win. 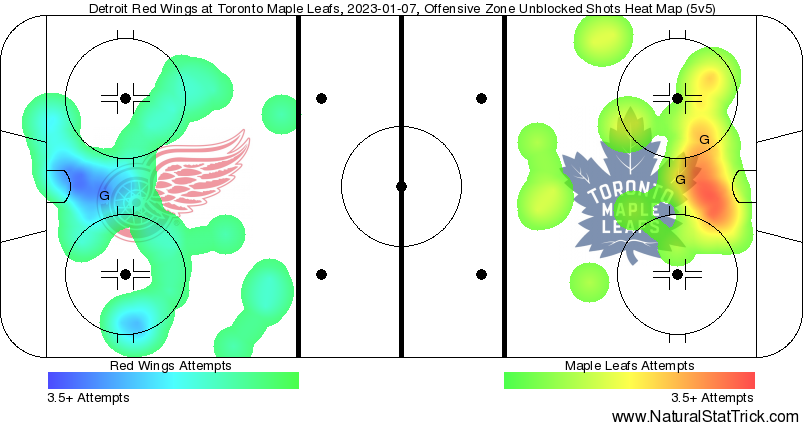