So this week, I was going through another one of @MLHS_Mike’s fantastic write-ups and it brought back memories from my early 20s. Mind you, I’m not that old yet, but I’m getting there.

I used to be a cook. I got to meet a lot of people in my line of work. Hockey players, baseball players, celebrities, and even a girlfriend I was with for most of my early 20s. But the memory I think fondly back on the most as a cook was meeting the 1993 Toronto Maple Leafs team.

I checked the dates and it appears to have been December 12, 2006. I found the game sheet too.

I had only been a month removed from completing my apprenticeship at my first restaurant; I had moved on to The Bottomline Restaurant where I quickly moved up to work the night shift. I remember how I got the job too – I was delivering a package on behalf of the Executive Chef I was working for and was blown away by all the hockey memorabilia inside the restaurant. There were hockey jerseys everywhere. The owner of the restaurant was Wayne Cowley – he had played one game in the NHL as a goaltender for the Edmonton Oilers. Through his years of playing hockey, he developed many connections that he used to his advantage in promoting the Bottomline Restaurant.

I had met many players: Glenn Anderson, Wayne Gretzky, Willie O’Ree, Bob Probert, Glenn Healy, to name some. Sometimes the Leafs playing in 2005 and 2006 would show up after a game.

On the night of December 12, 2006, I was sitting near the back watching the game nearing completion when Cowley asked me to come to the back. He asked if I wanted to take an early night and take my girlfriend out for drinks since he was going to let her go as well (she was a server at the restaurant). ‘Sure,’ I said, ‘it’s been a long day.’

Then he said, ‘The 1993 team is coming over in a bit; I want you and Jacqueline to enjoy yourselves and have drinks on the house.’

Twenty minutes fly by and I’m in the back of the kitchen quickly trying to clean up when I looked behind me and see Doug Gilmour walking towards me. “Hey-a bud.”

Actually, I was just completely speechless. Here was my childhood hero – the player whose playoffs performance captured the imagination of hundreds of thousands of Leafs fan and created new ones.

Actually, I’m making this conversation up. I don’t actually remember the initial conversation. But I did keep my composure long enough to let him know that Wayne was in the back and that he needed to let him know as soon as possible of the party size.

The players start trickling in. Bill Berg. Todd Gill. Wendel Clark. Glenn Anderson. Peter Zezel. Mike Foligno. Jamie Macoun. Seriously, I had trouble naming all the faces that walked by me — it had been more than 13 years since that team roamed the ice of Maple Leafs Garden. I’m sure I gave some random old guy a whimsical look.

Then Dave Andreychuk walked in. Let me tell you something about Andreychuk. He is fucking huge. In his prime, he was listed at 6’4, 220lbs. That night, and perhaps it was the beer and the confirmation bias of my idolatry, but he was much bigger than that. I would venture 6’6 with shoulders wide enough that two of me would barely equal them. Every step he took seemed graceful – no wonder this guy was a pretty great hockey player.
I went to the back of the restaurant to have a smoke and a drink with Jacqueline. Already out there were Gilmour and Cowley. The four of us talk for a bit. Gilmour asks if I’m enjoying my job. ‘Of course’, I said, ‘I’m in heaven right now.’ Everyone laughs. I randomly got the courage to ask Gilmour if he could call a friend and wish him a happy birthday.

And he actually did it.

One thing about Gilmour is how demanding people are of him. No matter where he goes, someone wants to shake his hand, have their picture taken with him, an autograph, etc. It took a few years for me to realize just how gracious Gilmour was in accepting my request. Here was this guy who had only been at the restaurant for an hour and has had to stop several times to have his picture taken or sign an autograph. Thinking back on it now, I feel bad for him – maybe he enjoys the attention and the worshiping that comes with his fame. I doubt that though; there were times over the two years I worked at the Bottomline Restaurant that I noticed how agitated he would get. To his credit, he never refused a request.

Jacqueline and Cowley went back into the restaurant, leaving Gilmour and me by ourselves. We spoke for 15 minutes about my job, his life after hockey, his favourite hockey memory, the 2006 Leafs. I was thrilled talking to my childhood hero.

After the conversation, we both went back inside and he went to go talk to someone. That someone turned out to be Pat Burns. Burns looked remarkably healthy at the time. This was sometime after his second (?) fight with cancer – I’m fairly certain that he was in remission at the time, but I can’t be certain. I wasn’t sure what to say to him, but Gilmour looked at me and waved me over. As soon as I walked over, Burns grabbed me by the shoulder and said, “Look at this guy! It’s like he’s in a room full of his heroes!” Everyone laughs. Embarrassed, I could barely let out a coherent reply, so I nodded.

Burns ignored me after that, but did give me a big hug. I have no idea why. I think I was the water boy of the restaurant that night.
It was around this point that the alcohol started taking over and my inhibitions started to disappear.

Now, I could be completely wrong on this, but I’m fairly certain that I wasn’t in dickhead mode at that point. I walked over to Clark and offered my hand to shake. He grasped it and looked away. This was extremely discouraging for me. On one hand, all I did was offer my hand to shake and introduce myself. On the other, he looked away. I found this reaction peculiar and a little insulting.

DownGoesBrown would say that this was my brush with death and I should consider myself lucky that Clark didn’t take my head off. I agree. Had I said anything beyond my name for his own “My good deed of the day was letting this person live” file, I’m certain I would have been joining Bob Brooke under the ice.

But as much as I loved Clark as a player, I never really recovered from this interaction with him.

The night wears on. I talk to Gill for a bit. He was drunk. His laughter would reverberate throughout the room. We spoke about Foligno’s Leap – this was before Youtube and I had just saw a highlight of his leap that night. I can’t remember exactly what Gill said, but it was something like, ‘That was the highest Mike will ever jump.’ Gill was hilarious. I have no idea what he was talking about half the time, but the laughter really did settle the nerves I had that night. He was the perfect person to interact with – everyone around him would crack up whenever he spoke.

At some point, I saw Felix Potvin. This was my dickhead moment. The cherry on top of all dickhead things I could have said that night. I walked over to him and offered my hand and said: ‘Man, I cannot believe you fought Hextall. What the fuck were you thinking?’

You know that moment that gets frozen in time when you say something really stupid and the recipient’s face goes from pensive to incredibly offended? That was me and Felix that night.

I am not a smart man.

And that caps the night. My memory stops there. One thing I am just realizing now is that I actually have one picture from that night. It’s not of me, but of Gilmour and two men I don’t recognize. 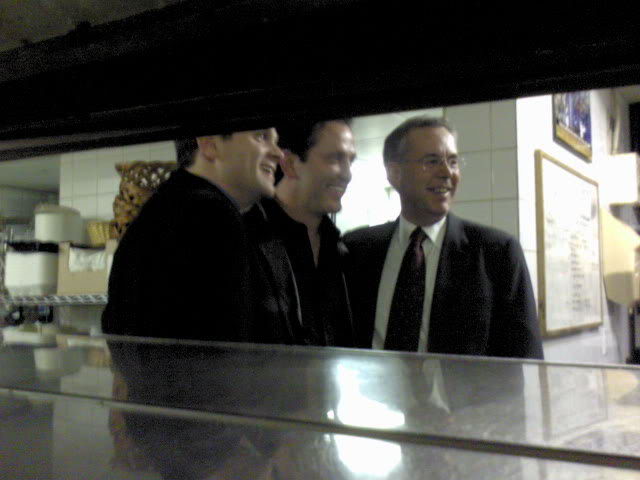 After that night, I got to meet Gilmour several more times over the course of my employment at the restaurant. I never really bothered him again, but we did have many drinks together in the back of the restaurant just chatting and smoking and laughing.