When an updated player evaluation tool and a star player collide, interesting things can happen.

This piece features a first glimpse of the brand new 2019-20 SKATR interactive player tool. To start, I thought we should look at Auston Matthews — because there are definitely changes underway.

I’ve been quiet on MLHS lately while I spent long hours working to rebuild SKATR from scratch, owing to the loss of its mainstay data source, Corsica. That forced me to survey the best available information from multiple sources and bring it all together.

I think this new version is even better “under the hood,” but I’ll save that for the new guide I will be writing soon. In the meantime, here’s an updated Glossary and here’s the original SKATR Guide for those wanting a more in-depth explanation.

A sidebar on interpreting this chart

The bars show Matthews’ percentile rankings among NHL forwards. Longer bluer bars are “better” and shorter redder bars are “worse”. The percentiles are also labeled on the left side of each bar.

Keep in mind that some of these measures overlap, such as the breakdown of points into goals and assists.  Also, SKATR bases its percentiles on 5v5 per 60 minute rate statistics, so ‘Goals’ means Goals per 60 minutes, for example.

Note: Everything that follows is focused on 5v5 rates per 60 minutes, the same as SKATR. I will not be poring over every statistic; instead, I will focus on two areas.

Although Matthews’ 5v5 Game Score and his well-documented goal-scoring power still rank very high (96th percentile and 97th percentiles), the component drivers of Game Score have seen two major changes that I will focus on.

One of those is his 5v5 point production. The other is his two-way play.

Matthews’ points/60 minutes have dropped to 2.39 (88th percentile) compared to 2.76/60 and the 98th percentile last year. This decline has been largely driven by lower primary and secondary assist rates (now at the 57th and 37th percentiles).

Shot assists estimate how many shot attempts Matthews supports with passes, based on the projection of a large sample of manually tracked passes and shots by @ShutDownLine and others. His eSA has dropped a little, from the 90th percentile to the 85th. That’s not very significant, so the rate of passing seems to be stable.

The bigger drop is seen in the on-ice shooting percentage, which has dropped closer to the middle of the pack, from the 76th to 61st percentiles. This would be a larger drop except that Matthews is included in that percentage along with the players he is on the ice with. Auston’s individual shooting percentage has actually risen from 13.1% to 16.5%, putting him at the 89th percentile.

Let’s take a look at the teammates Matthews plays the most with — Nylander, Johnsson, Rielly, and Barrie — and check their year-over-year shooting percentages.

William Nylander has more than doubled his shooting percentage, from 5.3% last season to 11.4% now, so that’s not the answer. This little flick pass by Matthews did the trick.

Auston Matthews (@AM34) just changed the definition of what a creative pass is. pic.twitter.com/b9OeLYhl56

This give-and-go sequence with Nylander shows there is no lack of passing talent in the tandem:

Love what Nylander and Matthews are doing in this sequence. Nylander lets Auston carry the puck up the ice. In the offensive zone, they switch and that opens up plenty of open ice for Matthews. When Nylander passes to Auston in the o-zone, there is little to no traffic. pic.twitter.com/J9SECjYx1W

The answer must lie with his other teammates.

In fact, after successful seasons last year, the other three have dropped off a cliff. 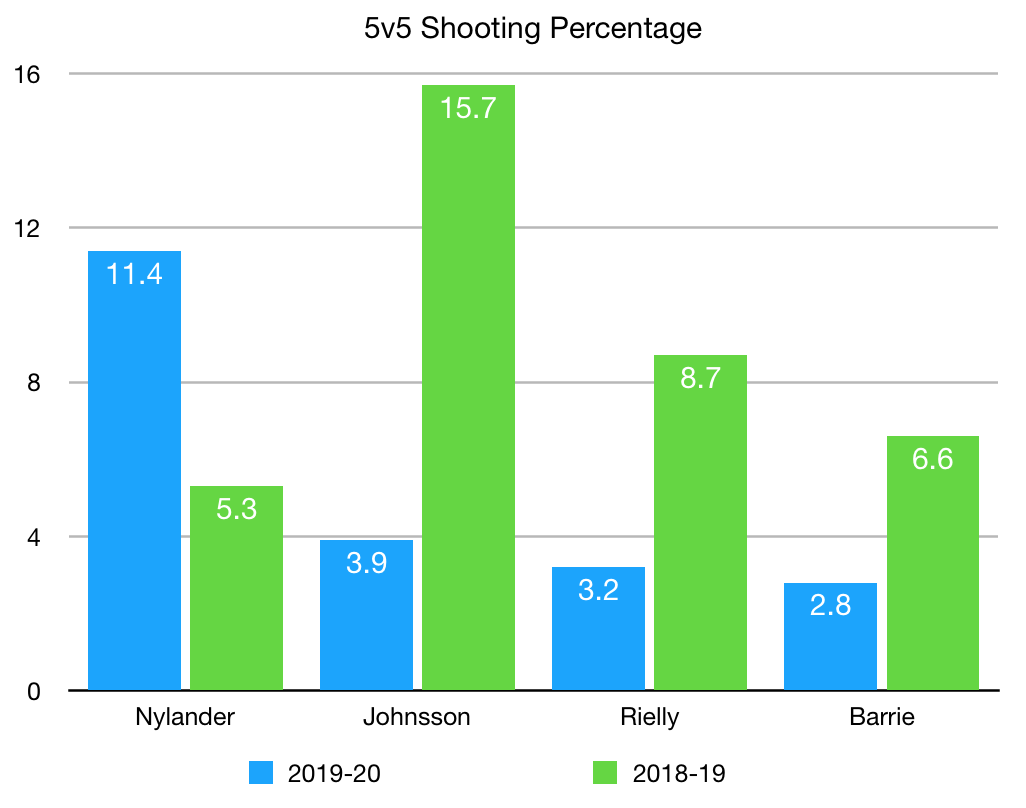 This is especially true for Auston’s regular left winger, Andreas Johnsson, who has been shooting at a 3.9% clip compared to a torrid 15.7% rate in his rookie season. Shooting percentages are notorious for bouncing around in partial season samples and Andreas is likely to return to a more normal rate over time. But it needs to be higher than 3.9%, too.

Many, including me, also noted that Johnsson was bound to regress to a more normal rate last season. Many also said the same about Morgan Rielly, who shot the lights out last year, and Tyson Barrie’s goal drought prior to Keefe arriving has already been well documented. They just haven’t been converting their opportunities.

While I would like to see Matthews become more of a point producer, you can’t produce assists if most of your teammates have cooled off. We can’t ignore the fact that the left-wing slot continues to handicap Matthews, unlike many other top centers. He simply hasn’t had a consistent shooter on the left side.

There have been recent examples where Auston Matthews has lost coverage coming off the side wall or the corner and ended paying for it with a goal against. The eye test tells us that as a young center, Matthews still has room for improvement. At the same time, have we really looked closely at what he has been doing in all three zones across all of his shifts?

SKATR is telling me that something has changed for the better in the way Matthews manages his two-way game.

Is that because of increased offensive zone starts? Not likely. Those OZ face-offs are relatively rare in a game and SKATR suggests they haven’t changed that much, only moving the needle to the 92 percentile from the 88th last year.

What about the level of competition? Auston Matthews faces elite forwards at about the same rate as last year — he is at the 62nd percentile compared to the 64th in 2018-19. That’s a non-factor. If anything, the loss of Tavares then Marner to injuries would have put extra pressure on Matthews.

Perhaps it is related to his linemates? I do think the steady influence of William Nylander has played a role. It would be hard not to be caught up in his play-driving jet stream through the neutral zone.

Nylander’s contribution to 5v5 expected goal share and shot share is estimated to be at the 94th and 97th percentiles, respectively. It’s probably the most elite aspect of his game: neutral zone transition, effortless zone entries, and maintaining control of the puck when he crosses the blue line. But can he hit? It’s hard to do when you have the puck.

#LeafsForever In 20 years #Leafs twitter will still be arguing about William Nylander and I will still be right. pic.twitter.com/1ZdNMNXLYj

The A3Z data viz by CJ Turtoro below further highlights those skills: in particular, his rate of entries into the offensive zone is at the 95th percentile among NHL forwards. Studies have shown that controlled zone entries generate many more goals than other entries like dump-ins. 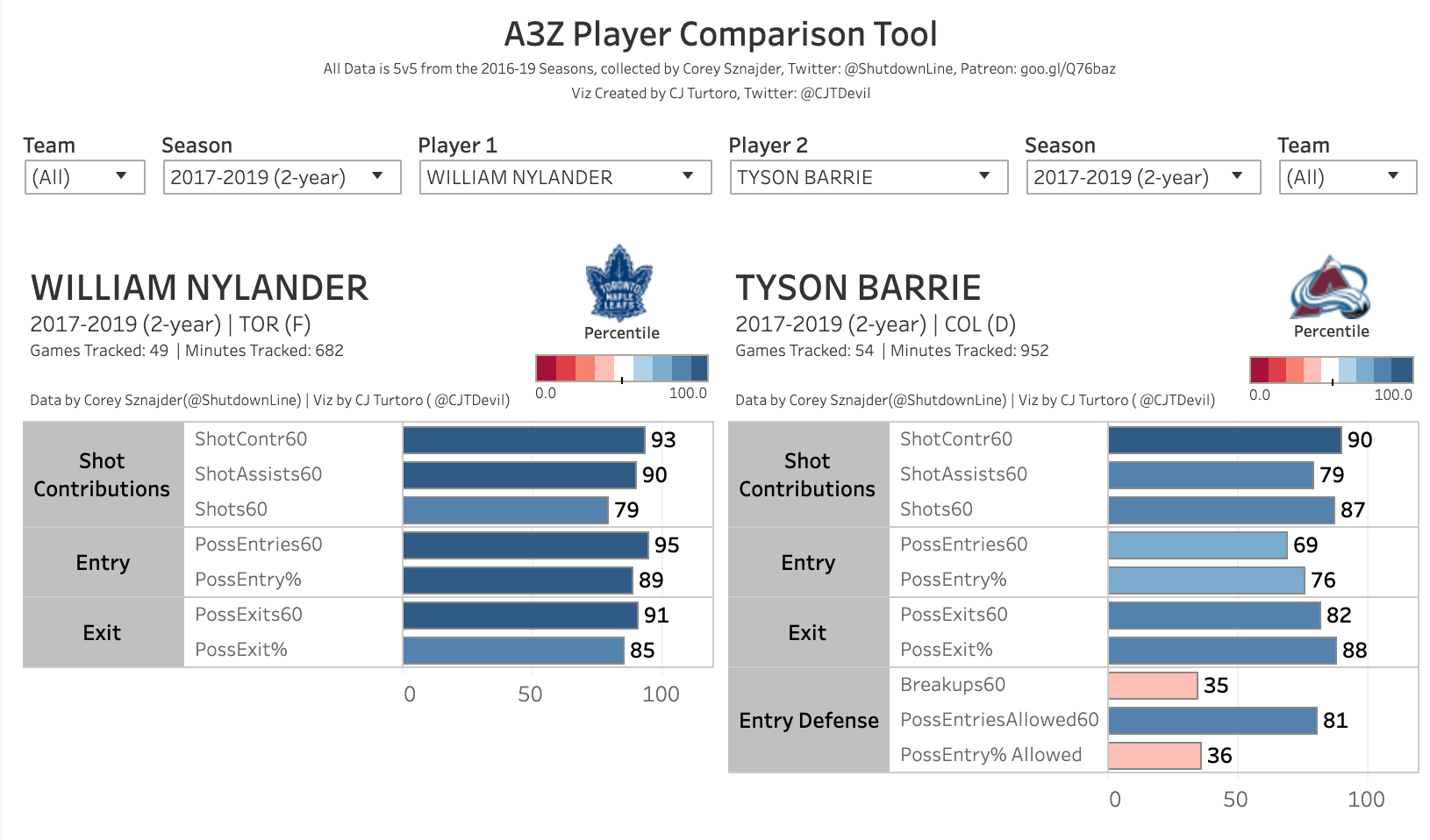 I also think a more mobile right defense capable of consistent zone exits has helped support Matthews (Ceci, Holl, Barrie). Say what I might about Barrie’s defensive zone coverage against top forwards, but I cannot deny that he is elite at exiting his zone. He ranks at the 88th percentile in successful zone exits over the past two years, compared to the 16th percentile for the departed Nikita Zaitsev.

Note: SKATR comes up with these shot metrics by combining the NHL play-by-play data files together with the MoneyPuck state-of-the-art expected goal model estimates down at the shot-by-shot level.

These numbers cover Matthews and his teammates on the ice at 5v5. As I said above, I think his teammates have played a role here, but now let’s try to separate out Auston’s contribution.

To do that, SKATR has six “relative to teammate” measures. I’ll take shot share (CF%) and explain how it is calculated. The other measures follow the same approach.

Relative to teammates CF% is the change in shot share (CF%) when a player is on the ice compared to the CF% when his teammates play without him in the same games. A good player will score higher on this stat. The stat is weighted by each teammate’s ice time with the player.

A year ago I had some real concerns about the two-way play of Auston Matthews. There’s not much to say now other than he has developed remarkably this season.

Matthews’ impact can be summarized in this chart, taking the percentiles from SKATR and placing them side by side. 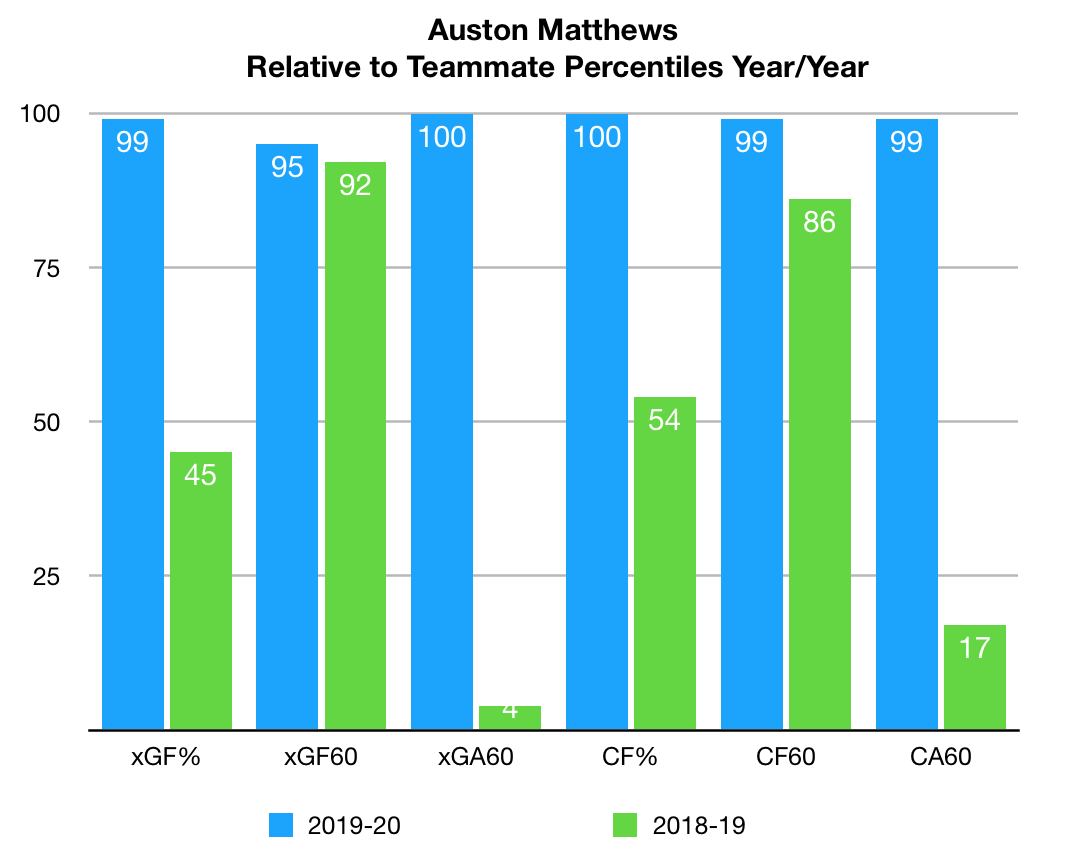 Here is a simple example taken from my SKATR guide, using mock data: 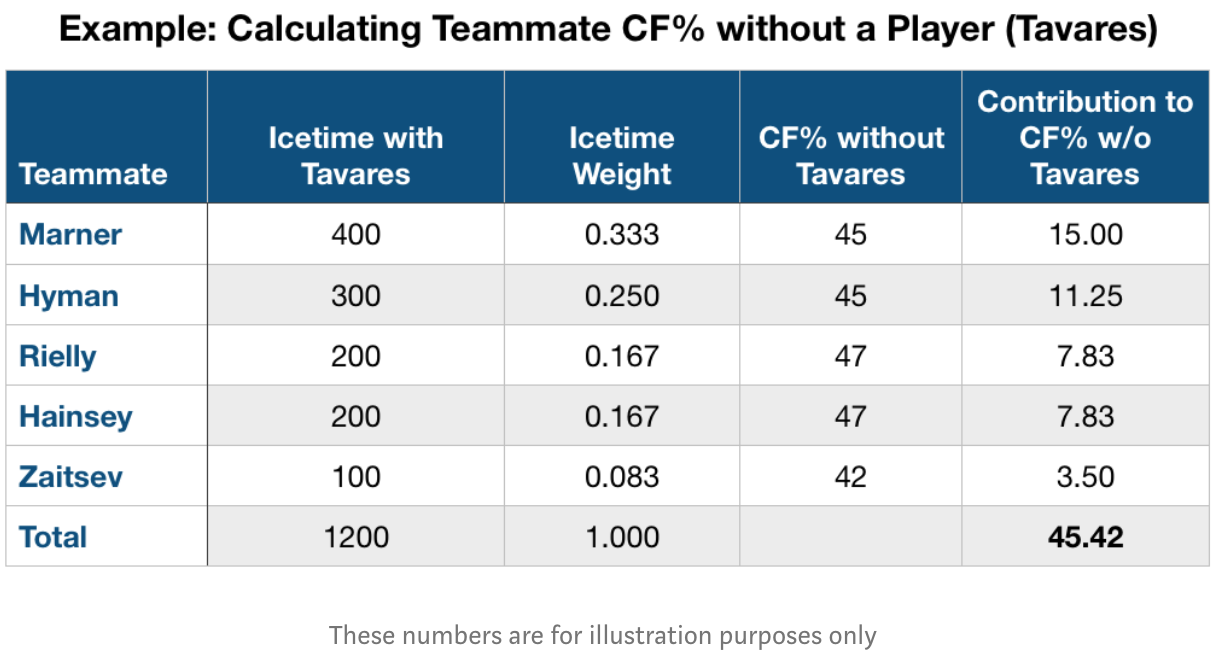 There are two steps in calculating a “Relative to Teammates” statistic. First, see what each teammate’s ice time is with a player (Tavares here) and turn it into ice time weights that sum to 1.0 — like .333 for Marner because he played 400 minutes with Tavares out of a total of 1200 teammate minutes. Then multiply each teammate’s CF% without Tavares by that weight and total them up. In this example, the weighted teammate CF% without Tavares is 45.42%.

If John Tavares’ on-ice overall CF% was 51%, then his ‘Relative to Teammates CF%’ would be 51% – 45.42% = +5.58. This has been shown to be a better way of isolating a player’s contributions in driving shot share than the more general on-ice CF% or the more common “Rel CF%” (relative to the entire team).

While his contribution to expected goals for (xGF60) has stayed about the same, it appears that Matthews’  ability to suppress expected goals against has flipped from very bad to elite with an xGA60 at the 100th percentile. Remember, this is an estimate of what he is contributing above his teammates based on what happens when they play with or without him.

The CF60 and CA60 measures tell a similar story and the net result is relative to teammate expected goal share (xGF%) and shot share (CF%) at the 99th and 100th percentiles, respectively.

There are many ways to suppress chances against and sometimes we don’t notice a puck theft from behind or an effective backcheck. Most of our attention is centered on the puck or at mistakes leading to goals.

Here is what Auston Matthews has been doing a lot more frequently this season — tracking the play back and using his stick to steal pucks or disrupt opponents on the backcheck.

Here he is using his elite puck thievery skills against the Islanders:

A change this dramatic comes with some cautions and notes:

It’s worth noting that the greatest change in these heat maps is in the high-danger area in front of the net — an area a center playing down low on defense has more control over. The same can be said about the offensive heat map, where the red bubble in front of the opponent’s net shows how much Matthews drives chances in close.

Based on SKATR and these heat maps, I think it’s safe to say that Auston’s two-way play has been showing definite signs of improvement.

We know he is a recognized goal-scoring machine. His point production isn’t doing quite as well as last year and a key reason appears to be the drop off in assists linked to his teammates’ reduced shooting percentage (except Nylander).

Until now, I was concerned about Matthews’ ability to drive a line over 200 feet. We now have evidence from SKATR, heat maps, and other sources that suggest he is turning that around and driving play at an elite level.

It’s a big thing, and if it is sustained over the season, it means a better Toronto Maple Leafs hockey team, one capable of making some noise over the rest of the season if other pieces fall into place under the new coach.