Defenseman Martin Marincin has re-signed with the Toronto Maple Leafs on a one-year, one-way contract extension worth $700,000, the club announced on Friday.

Marincin has now signed four short-term deals with the club since arriving via trade from Edmonton in June of 2015 — three one-year deals and one two-year deal. Marincin has also cleared waivers a few times when bouncing back and forth to the Marlies, where he’s spent 65 regular-season games and 20 playoff games, winning the Calder Cup with the AHL club as part of their shutdown defense pairing in 2018.

It’s rare for a seventh or eighth defenseman to stick with one NHL club for as long as Marincin has (going on five years), but Sheldon Keefe recently spoke to Marincin’s suitability to the role as an extra who needs to be ready when called upon in the case of injury, such as when the Leafs lost Jake Muzzin to a broken foot recently. Keefe referenced Marincin’s appreciation for how he’s been treated in the organization and also that bouncing back and forth between the levels doesn’t require relocating geographically in Toronto:

It’s his personality, would be the big thing. He is a very easygoing guy. I think the organization also has treated him very well, and he’s recognized that. Obviously, he had a very good experience both with the Marlies and winning a championship but also I think we put a lot of time into him and working with him on his game, and he felt himself improving. All of those things are a part of it. His personality and how he has remained confident in himself and accepted the bouncing around a little bit — the credit would go to him. Remaining in the city of Toronto while moving up and down is a big factor as well.

Of course, there’s also the fact that the Leafs have no issues paying him a guaranteed NHL salary on one-way contracts.

Marincin has had to fill a role for the Leafs recently due to the injury to Muzzin; he’s stepped in and played a regular penalty-killing role and even spent some time in a matchup capacity next to Justin Holl — his partner during the Marlies’ Calder Cup run — before Keefe shuffled the deck recently and shifted him down to the bottom pairing with Cody Ceci. He’s averaged 14:19 per game this season, although he’s played nearly 18 minutes a night after Keefe reinserted him into the lineup in late December. The team has broken even in possession (158 shots attempts for, 150 against) and goals share (7 for, 6 against) at 5v5 with him on the ice, and he’s sitting at 50% in expected goals.

Bill Comeau’s mid-season analysis showed us that Marincin’s numbers are perfectly fine when he’s playing against weaker competition, but unsurprisingly, the 27-year-old starts to struggle when he’s asked to do more against stiffer opposition. As a depth D who can play the PK competently and defend well enough against third and four lines, and who is clearly a happy camper with his #7/8 D station in the organization, GM Kyle Dubas continues to offer Marincin near-league-minimum contracts, and Marincin keeps signing them. 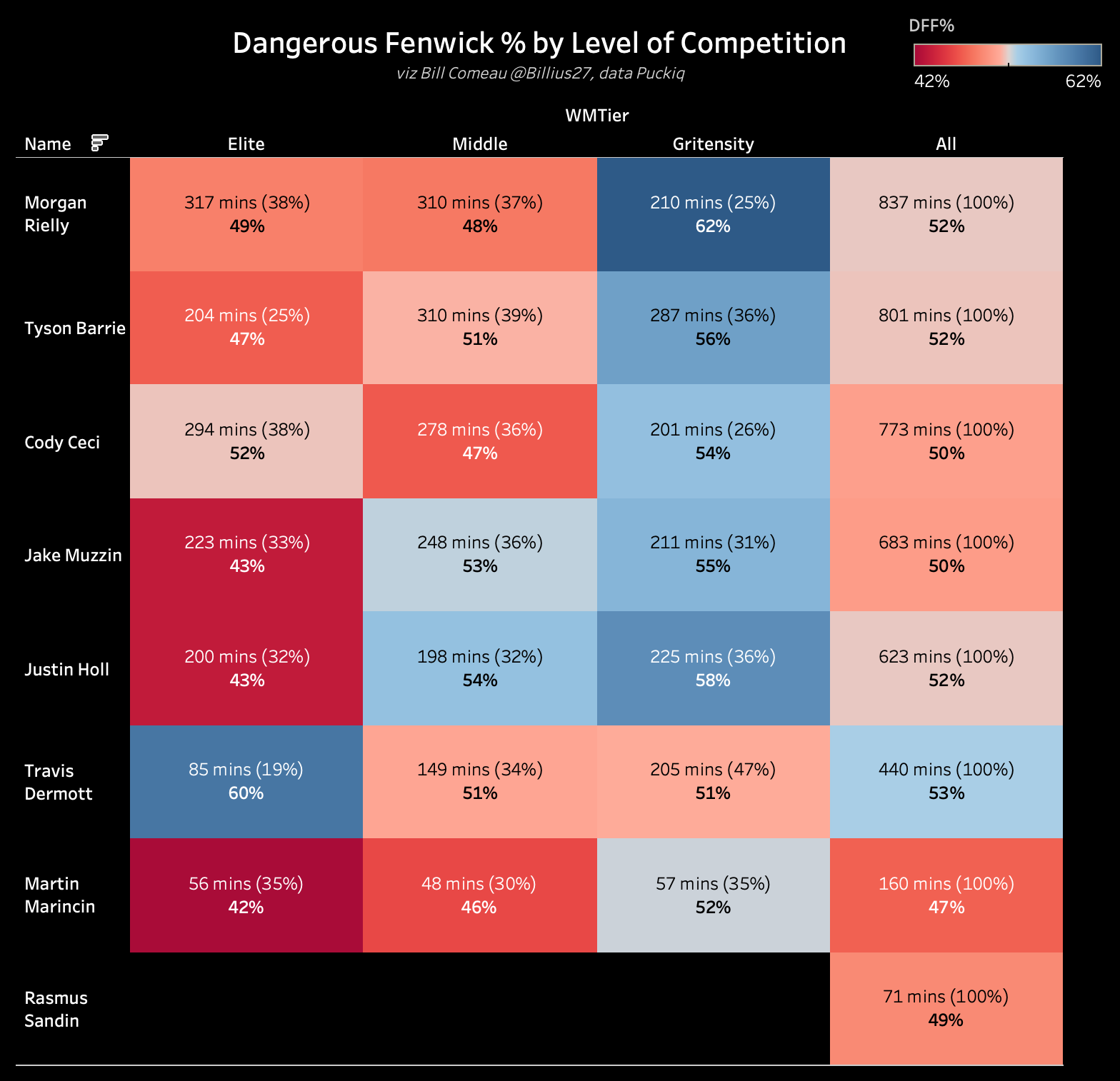 With the team’s contract extension for Justin Holl on New Year’s Eve, this now gives the Leafs three defensemen signed past July 1, 2020 — Morgan Rielly, Holl, and Marincin — with tough decisions to make on pending UFAs Jake Muzzin and Tyson Barrie, and pending-RFA Travis Dermott also in need of a new contract this summer.

Sheldon Keefe on playing with the lead: “We don’t want to be conservative in terms of giving up the puck and forcing ourselves into...

Leafs Notebook: What adjustments are opponents making to Keefe’s Leafs? And...

Sheldon Keefe on playing with the lead: “We don’t want to...

It is home to a vibrant community of Leafs fans who debate the team and enjoy the highs and lows of Leafs fandom together every single day.

MLHS remains free and accessible to all Leafs fans wishing to enjoy its content and community. It does not put up a paywall. If you value the site’s content and community, consider a small monthly pledge of support. With a contribution of $5 or more, we will provide you with access to an ad-free experience on MLHS.