Home Analysis Does a Tyson Barrie for TJ Brodie trade make sense for the...
Advertisement

Yesterday, I wrote about the Toronto Maple Leafs defense and the difficulties pending UFA Tyson Barrie has been having in his own zone.  One option Kyle Dubas has reportedly considered is a trade with Calgary involving the exchange of the offensively-minded Tyson Barrie for T.J. Brodie.

Interest in Tyson Barrie has heated up — he is now fifth on TSN’s Trade Bait list.

More Trade Bait talk on @SportsCentre– I believe at least 4 teams have shown interest so far in #Leafs pending UFA Tyson Barrie: #Canucks , #Flames , #VegasBorn , #LetsGoCanes. Only way Barrie gets dealt is if TOR finds better fit on D, or gets pieces to flip for that better fit.

On TSN’s “That’s Hockey” on Friday, Frank Seravalli identified that a Tyson Barrie – T.J. Brodie one-for-one trade has been discussed.

“It really gets interesting with the Calgary Flames. They have a lot of different balls up in the air. One of the proposals that was tabled was a straight-up one-for-one, pending-UFA-for-pending-UFA deal of TJ Brodie for Tyson Barrie. Ultimately, I think that was something that was discussed a while ago. Nonetheless, very interesting to consider if the Leafs think TJ Brodie can be a better fit for their roster.”

The first obstacle is 29-year-old Brodie’s eight-team no-trade list, which is reported to include Toronto. Brodie would have to waive that restriction for a trade to happen.

Of note on T.J. Brodie: He has the Leafs listed on his no-go section of his no-trade list. Toronto tried to acquire him last June in a Kadri deal.

Like Tyson Barrie, Brodie is a UFA on July 1st. His cap hit of $4.65M would be higher than Barrie’s $2.75M (half of Barrie’s hit is retained by Colorado), and that would need to worked out given Toronto’s cap situation, although I believe Andreas Johnsson’s lengthy LTIR would free up enough room to account for the difference.

Here’s a sampler of T.J. in action. It should be noted that he had a shocking episode in practice where he collapsed but appeared to be fine after tests.

In just his second game back since collapsing in practice, TJ Brodie has his first of the season

You love to see it @NHLFlames 🔥 pic.twitter.com/fFkB5JpGTN

T.J. Brodie is left-handed but has experience playing on the right side as well. His 2019-20 profile comes in with an all-round SKATR score at the 85th percentile, not far from Tyson Barrie’s 92.

Despite lower five-on-five point results, Brodie has the potential to create offense given his underlying secondary assist and estimated shot assist rates (97th and 91st percentiles).

But the main attractions for Toronto are further down the profile:

Brodie’s profile contrasts with Tyson Barrie, who is more offensive and suffers more in defensive comparisons. The fact that Kyle Dubas tried to make a move with Calgary last June before the Barrie – Kadri trade happened should not be lost on anyone. 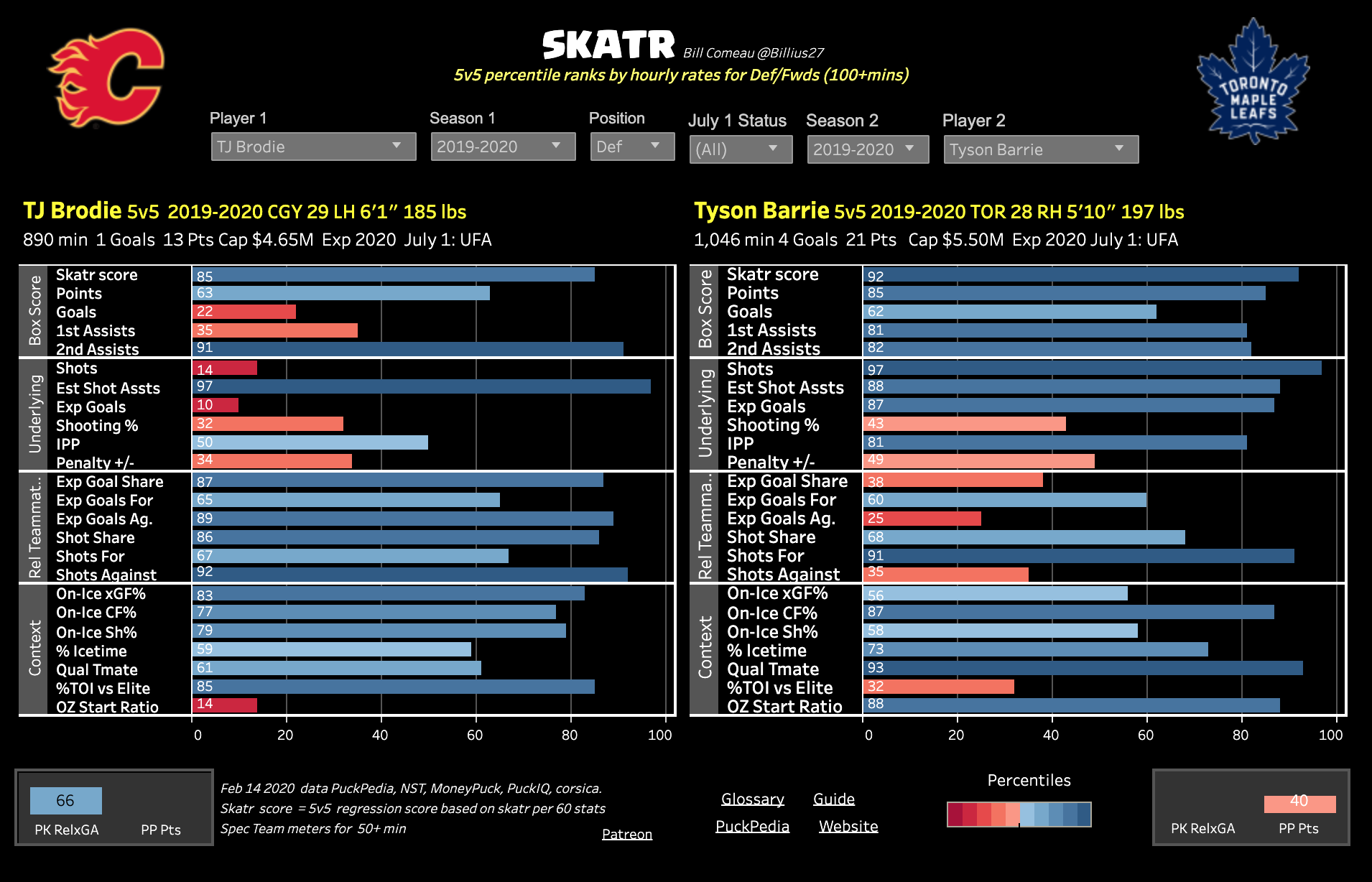 T.J. Brodie has an excellent RAPM profile at even-strength. Again, the two bars on the right focus on defense and they are very good. 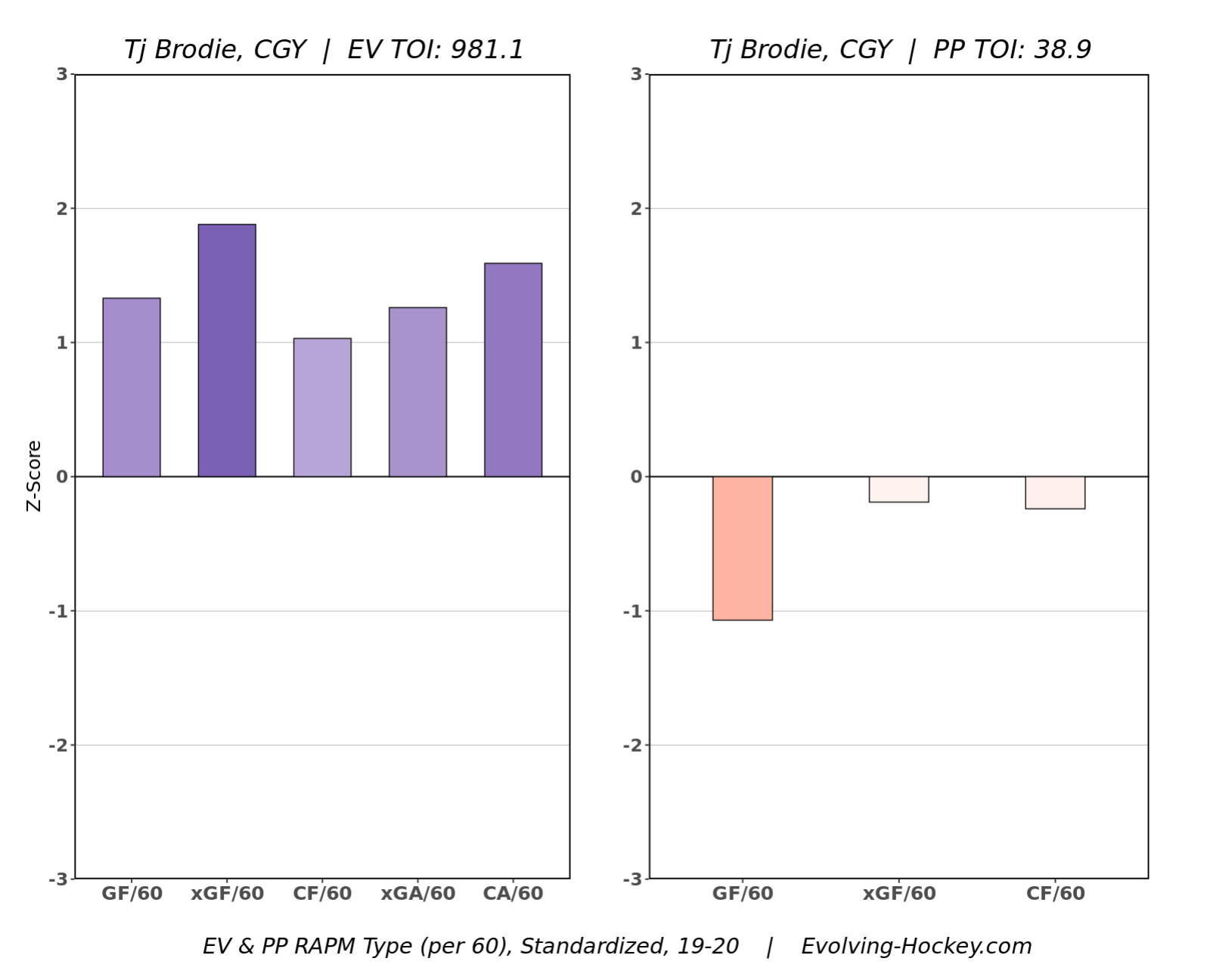 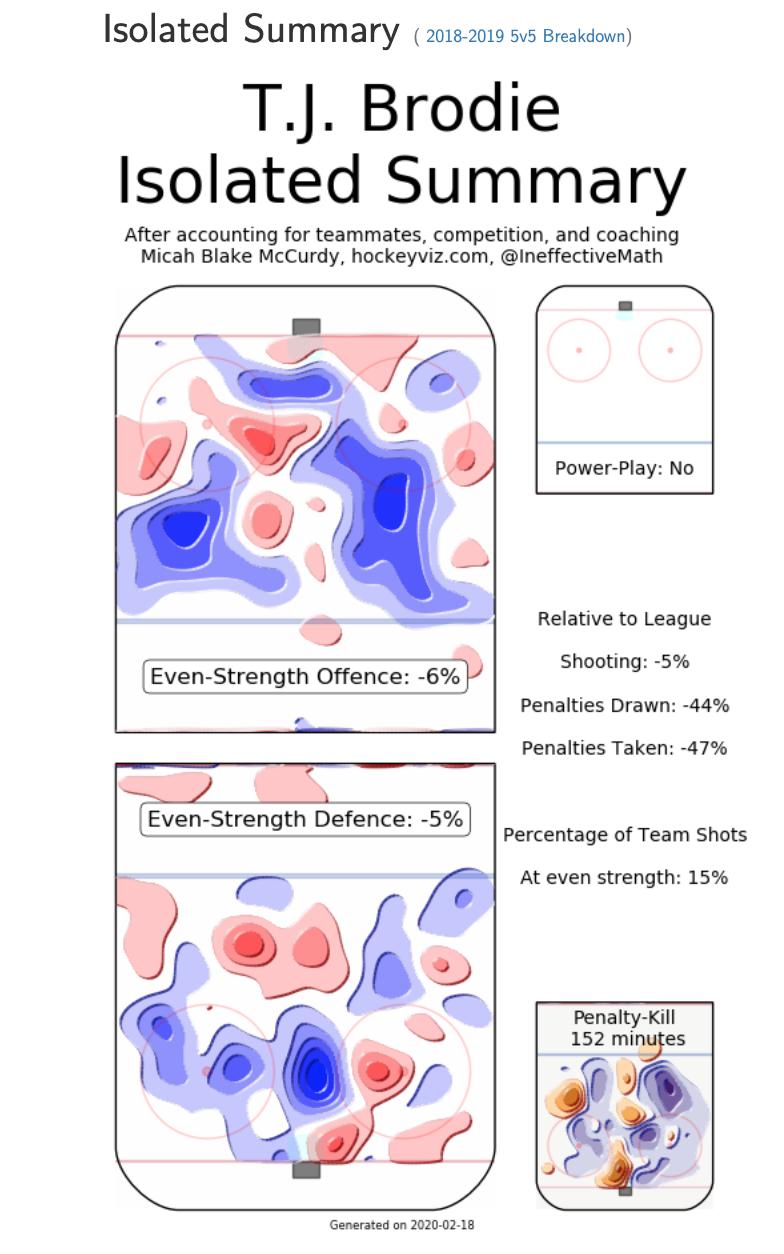 As SKATR pointed out, Brodie’s offensive impact is below average. He reduces Calgary’s offensive threat by -6% when on the ice according to the hockeyviz.com’s isolated threat models. Red areas show higher intensity threats.

On the other hand, he also reduces the opponent threat by -5%.

These numbers are an improvement on last season when he provided a -17.1% threat reduction on offense and a +1.3% increase in threats against his own net.

T.J. Brodie’s first-pair deployment appears to be over in Calgary, with a decline in ice time starting in 2017-18. He is now used mostly as a second pair LD.

His career performance has shown some decline since his peak year in 2013-14, but he remains a positive contributor based on expected standings points created and expected (net) goals above expected created per 60 minutes. 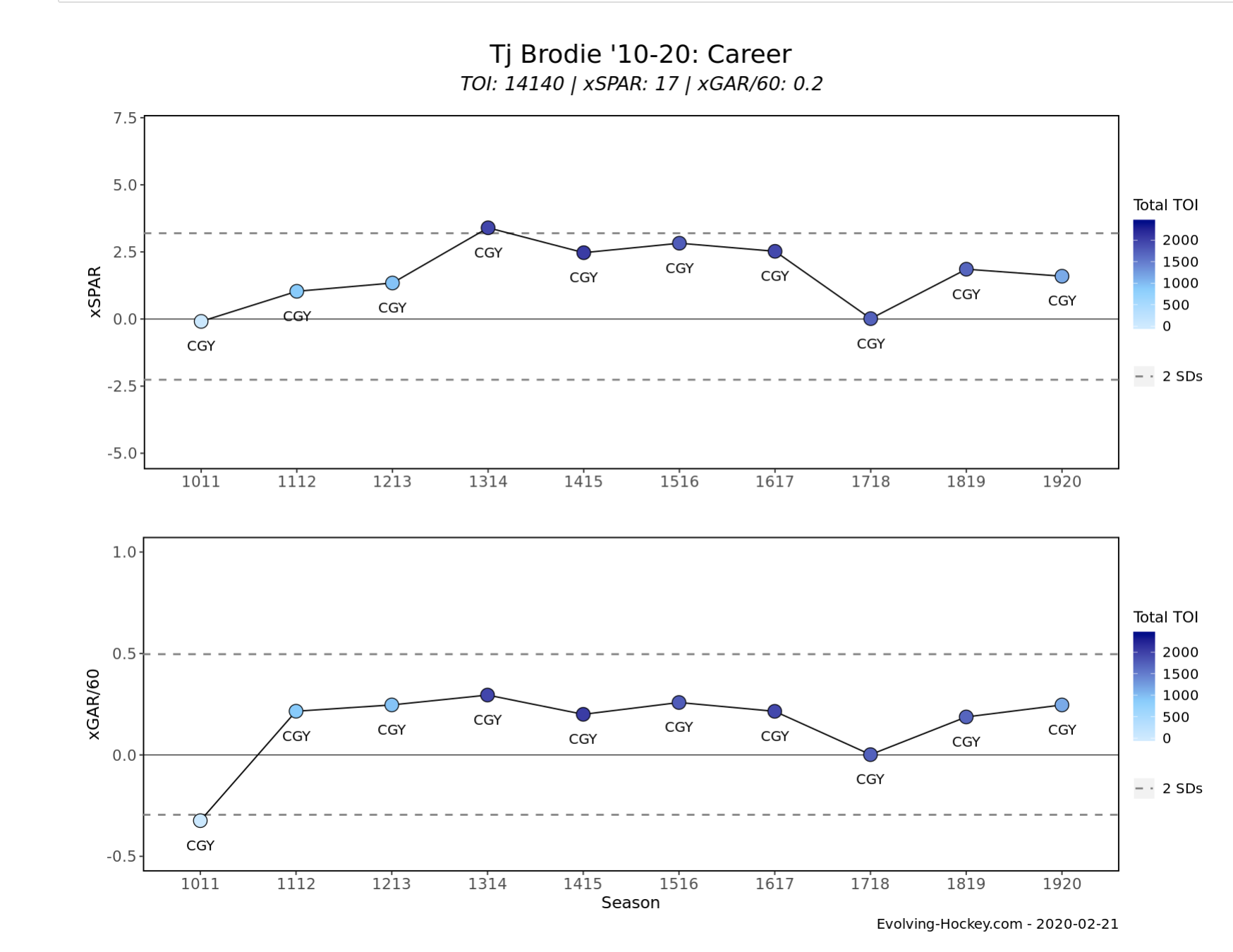 Trade Pros and Cons for Toronto

To sum up the pros and cons of a TJ Brodie acquisition: