It was a response the Toronto Maple Leafs badly needed.

And an injury they really couldn’t afford:

Jake Muzzin will be out four weeks with a broken hand. A major blow to a battered #leafs blue-line. Calle Rosen has been recalled from the AHL Marlies.

1.  I wondered whether the Leafs, completely embarrassed against an emergency backup goalie, would have the character to rebound or get run out of the building against the league’s best team (no apologies to Boston).

What the humbled Leafs did do was climb out of the hole they had dug, dust themselves off, and win a big road game. They won 4-3 despite losing Jake Muzzin for the third period due to a broken hand. Frederik Andersen played solid in net, they got a boost from their special teams, and their third line led by Kasperi Kapanen played a good two-way game. There were good performances up and down the lineup.

2.  From the start, Jake Muzzin and Justin Holl led the team’s attack from the back end, moving the puck through the neutral zone and penetrating deep into the Tampa end. Sheldon Keefe’s game strategy was clearly to press play with his best defense pair and hope to score the critical first goal. Justin Holl was flying and almost split the Bolts defense at one point. His partner Muzzin worked hard, skating in behind Tampa’s goal line more than once.

3.  Although the Leafs started the right way, Tampa scored the first goal on a sequence of weak plays by the Leafs‘ forwards and defense. Rasmus Sandin did everything right to start the sequence with a good pass, but the forwards failed him badly. What was Pierre Engvall thinking here? Or Alex Kerfoot?

Not sure why Sandin is getting heat for this play. Engvall and Kerfoot deserve more criticism for not touching the puck. #LeafsForever pic.twitter.com/wlqGehFX6U

They would all pay for the resultant icing. Having rookies Sandin and Liljegren out for a defensive zone face-off against Stamkos and Kucherov is … not the ideal scenario. Kapanen failed to retrieve Liljegren’s pass up the boards, then three Leafs players got caught high, leading to a slick Stamkos move on Sandin and a set up to Nikita Kucherov. Andersen had little chance.

4.  Jake Muzzin just signed a four-year extension for $5.625M. He has been a leader on and off the ice through the recent slump and he did not disappoint last night. Muzzin played one of his best games of the season, at least up until his hand injury, which is yet another devastating injury blow to this team.

After Tampa had scored, Jason Spezza set up Muzzin at the point and he blasted it home. (The NHL gave the goal to Muzzin after it looked like a Spezza tip.)

Spezza gets a piece of Muzzin's shot from the point. 1-1. #LeafsForever pic.twitter.com/sccY2omwF5

Later in the game, Muzzin showed his wheels as he joined the break and almost scored with a shifty move on net.

What a move by Muzzin. #LeafsForever pic.twitter.com/o8H5Yob2j6

But that all ended in the second period when he took a shot off the hand and left the game. The Leafs could ill afford to lose their leader on defense — not with Morgan Rielly and Cody Ceci also out — but the season from injury hell continues unabated, and now Rasmus Sandin is going to pushed further into the deep end down the stretch, at least until Morgan Rielly can get back.

5.  William Nylander had one of his best all-round games of the season. Sheldon Keefe noticed the overall game effort:

Willy really worked in this game today and won a lot of loose pucks for us.

Nylander got the Leafs game ball 🏀

Did William pull off a slick move?

Nylander was making little plays like this all night:

#88 battled for the puck, used a strong stick to steal and pry pucks away, set up a goal, and to cap it all off, he went between his legs to score a highlight reel goal. He has been scoring goals near the net all season — his quick stick can be too much for goalies sometimes, even Andrei Vasilevskiy. That was Nylander’s 28th goal of the season.

6.  The rookies on defense weathered the Tampa attack, but it was a tough assignment. At times, it’s clear they are apprentices still learning, sometimes getting outmuscled for the puck or being half a second too late to react to a play. The oddest sight was seeing Patrick Maroon dwarf Rasmus Sandin in front of the net on one goal.Sandin shows heart and competes, but it’s not easy for a lighter defenseman to clear the net with players the size of Maroon.

Liljegren and Sandin ended up -2 and -3 on the night, respectively. Those numbers don’t just belong to them. One of those goals was set up by the icing sequence I mentioned earlier. There are going to be tough games like this for the two rearguards, but this is how they will need to develop — by facing tough situations in their own zone.

7.  The special teams won the Leafs the game. Jon Cooper said as much. After being blanked in four of the last five games, the power play came up big. The Leafs scored twice in four opportunities on goals by Tavares and Nylander. They also shut down Tampa’s elite power play three times, although Stamkos and Kucherov created some grade-A chances.

Both teams played a high-risk game at the power play blue line, surrendering several odd-man rushes. Mitch Marner was noticeable in both directions; he allowed one Tampa shorthanded break on a questionable pass at the blue line while also creating a short-handed chance himself.

(But lately I’ve been noticing more unforced errors by Marner… not sure why that’s happening.)

Marner and Hyman press for a SH chance. #LeafsForever pic.twitter.com/XV62y1jvk4

8.  You would be right in saying that John Tavares was a star of the game after scoring two clutch goals and having the second highest expected goals on the team (.74). But he also had a subpar night in the two-way play and gave up chances defensively. His bad pass in the Toronto zone led directly to a Tampa goal and his on-ice expected goal share (xGF%) was one of the lowest on the team (28%). That’s how his season has been going lately – chances and goals at both ends of the rink. But tonight he came up big.

9.  Kasperi Kapanen has been giving the team an extra punch from the third line over the last couple of weeks since his alarm clock failed him. He seems to be getting a breakaway every game and this game was no different. A revitalized Kapanen could play an important role down the stretch. I don’t think Tampa was expecting Toronto to generate so many odd-man rush chances — Toronto’s counterattack was excellent on the night.

Kapanen with a nifty move on a breakaway. #LeafsForever pic.twitter.com/TiznXeDmQ1

10.  Hockey is a random game. The Leafs seem even more random right now. They looked ugly against Buffalo, were slapped by Pittsburgh, and then came back to shut down the Penguins with their best game of the year. You could almost predict the next game, but they jumped the shark and became a meme by losing to a Zamboni driver. So of course they were expected to beat Tampa.

The third period last night was a trial by fire without Jake Muzzin as Sheldon Keefe acknowledged after the game:

“In the third period, you know they are going to have a really strong push and it is important for us not to crack. They get the one and we just stayed with it. We were shorthanded on the backend. Those guys battled really hard. A lot of really positive things for us and a good feeling post game.”

The Leafs barely hung on. A hungry Tampa team pressured the weakened defense with a shot advantage of 12 – 3 and an 84% xGF%. Justin Holl, without his partner, was clearly being asked to play well above his pay grade at times, but he still hung on in a gutsy 24-minute performance. Travis Dermott played through a possible concussion after being stunned by a Barclay Goodrow hit that in saner times would have received a penalty.

Despite all of that, and despite losing the shot share and third period, this Leafs team deserved to win the game against what is arguably the Stanley Cup favourite. 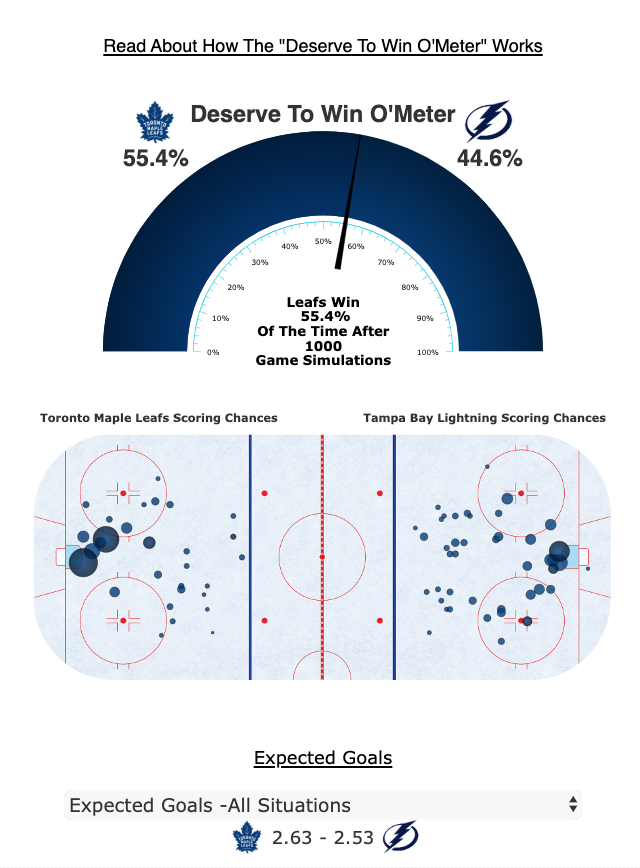 I’m not going to try to explain it.

Ian Tulloch - Apr 23, 2021
0
After getting goalie'd in Vancouver, the Toronto Maple Leafs did some goalie-ing of their own tonight in Winnipeg. It's not every night you see Connor...