Despite a little tension in the waning moments, the Maple Leafs managed to escape Minnesota with a 4-3 victory over the Wild thanks to a balanced offensive attack and big-time saves from Matt Murray.

The final few minutes may have induced a few heart attacks for Leafs fans. The limited defensive personnel led to a few adventures as the Wild pressed for the tying goal (looking at you, Rasmus Sandin), but alas, Toronto held on to win a second straight game, extending the team’s point streak to seven games.

1.   Sometimes, when you’re on a hot streak, things seem to just fall into place. Mitch Marner is a confident figure at the moment as the point streak continues (now at 15). A run this long can’t sustain itself by looking for the perfect play all the time, as Marner exemplified on Friday afternoon.

After John Tavares won the faceoff back to Timothy Liljegren, Marner rotated back to the point to give Liljegren a pass option up high. From there, Marner simply looked up, threw one on goal, and the puck found a friendly deflection off of Mathew Dumba.

It was far from the prettiest goal, but getting rewarded for throwing a puck toward the net was something of a theme for the Leafs in this game.

I guess it shouldn’t come as a shock, then, that the Wild scored on the man advantage as a result of two great chances in front. After a cross-ice pass made it through a pair of Leaf sticks, Joel Eriksson Ek was left wide open in front. He was unable to bury the shot under Matt Murray, but Kirill Kaprizov was on hand to clean up the rebound in tight to tie the game.

3.   The 1-1 scoreline did not last long thanks to an immediate response from the Leafs‘ checking line. With the puck deep in their own zone, the line executed a pretty clean breakout. David Kämpf and Zach Aston-Reese pushed down the right boards into the Wild zone, where Kaprizov came back and stole the puck. However, he circled behind his own net and ran straight into Pierre Engvall, who blocked a clearing attempt. The puck dropped onto Aston-Reese’s stick, who simply turned and fired on net.

To the surprise of everyone, including Marc-Andre Fleury, the puck squeezed through and restored the Leafs’ lead just 41 seconds after the Wild tied it. It was another instance of the Leafs getting rewarded for throwing the puck on goal, although this is about as weak as it gets from Fleury in the Minnesota net.

This checking line continues to be a revelation for the Leafs. There’s a reason Sheldon Keefe started the game with that line, and there is also a reason it’s spent a lot of time on the ice with a one-goal lead in the final five minutes of the last two wins.

4.   Toronto took the lead into the first intermission, but the Wild were able to again even things up just a few minutes into the second period. Jordan Greenway carried the puck through the neutral zone and chipped it in as Victor Mete aggressively stepped up to track him from left to right across the blue line. Mark Giordano stayed on his side of the ice with Mete out of position and John Tavares let up a little the backcheck, leaving Matt Boldy wide-open for the one-timer.

5.   The John Tavares line found a response seven minutes later off of an offensive-zone cycle. Mitch Marner was outnumbered against two defenders, but Justin Holl pinched up to force the puck free to Tavares. At that point, Mark Giordano also activated to give Tavares a passing option.

As Giordano drove down to the left circle, he let a shot go that eventually found its way to Calle Järnkrok in front, who tapped it into the open net after Fleury flew aggressively out of his crease on the first save.

Calle gets us back on top! 🚨 pic.twitter.com/RON9pbfT2s

That goal felt deserved for Jarnkrok, who made the most of his opportunity on that line by providing a steady forechecking presence while Marner and Tavares worked their magic in open space. He provided a little more on the forecheck over an Alex Kerfoot or Nick Robertson lately, which meshed well with the cycle-based game Tavares and Marner play.

6.   Justin Holl has never been a standout physical player per se, but it was nice to see him engaging physically along the boards in this game. He threw a hit on Ryan Reaves at one point that led to a few minor exchanges between the two players throughout the game as Reeves made sure to get Holl back whenever the chance was there.

It was also the second straight game in which Holl logged the most ice time on the team. Holl played 23:46 against Minnesota after playing 25:03 against New Jersey. With Morgan Rielly and TJ Brodie out, Holl has stepped up mightily in his absence alongside Mark Giordano.

The pair are leading the defense with over 22 minutes TOI apiece since Brodie went down, and while the expected goals and scoring chance numbers aren’t too pretty, they’re even in shots and goal share at five-on-five in the last seven games despite playing the toughest minutes. They’re getting the job done by whatever means necessary for the team at the moment.

7.    Part of the reason Holl and Giordano are logging such heavy minutes is the need to insulate a makeshift bottom pairing of Victor Mete and Mac Hollowell. They played fine on Friday, although that pair also got caught against the Minnesota checking line multiple times leading to issues. With two defenders under 5’10 and 190 pounds facing off against forwards with four-plus inches and 30+ pounds on them, turning puck retrievals into zone exits can become problematic, although they did enough to survive those shifts.

Hollowell, especially, looked surprisingly calm and poised for a defender in his second NHL game. He’s been content to make the simple plays and not overextend himself too much, which has helped him stay afloat so far. For the vast majority of his first two games, Hollowell has not been too noticeable, which you’ll take if you’re the Leafs in this situation.

8.    Late in the third with the game at 3-2, during a partial line change, Wayne Simmonds ended up a one-on-three against the Wild as Auston Matthews and Michael Bunting jumped onto the ice. Simmonds was able to get a shot off and avoid a hit, allowing Matthews and Bunting to get in on the forecheck while Simmonds completed the change.

After a near-miss in front, the puck cycled up the left boards, where Victor Mete stepped up to keep the play alive. Bunting calmed the puck down and dropped it for William Nylander, who had come charging onto the ice. With plenty of time and space, Nylander ripped one cleanly by Fleury.

This one was extra sweet for Nylander. He was the fourth Swede to factor in on a Leafs’ goal on Friday, the day after Börje Salming passed away. He also tied Salming in goals by a Leaf with 148 with this goal. This all comes a game after the Leafs won 2-1 in game #21, with Swedish forward Pontus Holmberg scoring his first NHL goal for the game-winner. Written in the stars.

As Nylander said post-game, “that goal was for Börje.”

9.   The Leafs weren’t able to see out a low-event finish to this game. The Wild pulled the goalie with around five minutes left while down 4-2, and the Leafs crawled into a shell. The Wild managed to circle the puck back up to the point, where Goligoski sent it across to Kaprizov, who sent a one-timer on net. The initial shot appeared to take a deflection and then the rebound went straight to Mats Zuccarello, who made no mistake. That was a tired-legs goal for the Leafs after the icing by Bunting.

10.   This game nearly ended up in overtime (apparently, the Leafs’ kryptonite) as Minnesota continued to press. In full control with time and space, Rasmus Sandin threw the puck away onto the tape of Zuccarello, who sent a one-touch pass across the ice to a wide-open Kaprizov for another one-timer. It’s a teachable moment for Sandin, who as Sheldon Keefe put it after the game, “hasn’t been on the ice [much] with the other team’s goalie out in the NHL.”

For a split second, it felt like the Leafs had blown the game similar to the Islanders loss. Fortunately, Matt Murray flipped the script with a big save on Kaprizov, who didn’t hit his spot with the one-timer, firing it back toward the middle of the net.

Matt Murray is that dude. pic.twitter.com/RAIUXj7yac

The final stats (25 saves, .893 save percentage) don’t do Murray justice. He was phenomenal in this game. 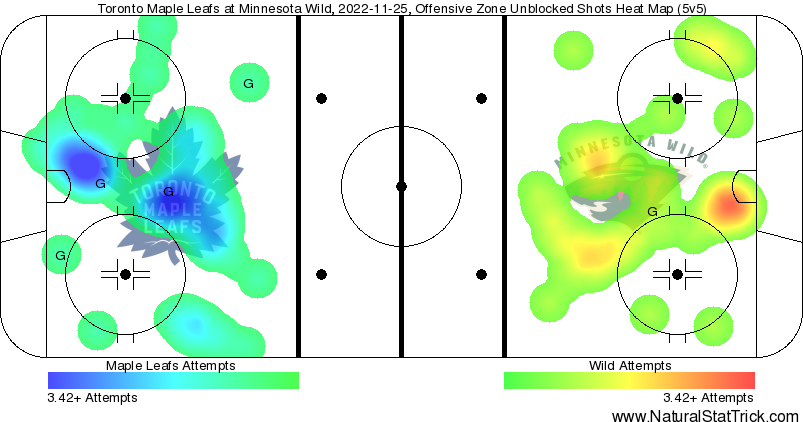