While the Maple Leafs were able to celebrate Mitch Marner’s franchise-record-setting 19-game points streak, the night did not end in a win. After a continuation of their overtime woes and the PK struggles on the road, the Leafs left Tampa Bay with one point in a 4-3 OT loss.

1.     It’s no secret that Mitch Marner has been playing some of the best hockey of his career of late. A large part of it is how much his offensive production breeds more confidence with the puck, and how that confidence, in turn, translates to him creating more offensively. It’s true of every player, but the swagger is particularly noticeable with Marner.

both Matthews and Tavares get a chance on this play from Marner pic.twitter.com/VDaMThU91L

It was clear Marner was going to leave a big footprint on this game from very early on. He cut through the middle of the ice and drew the attention of three defenders, allowing Auston Matthews to sneak into the open space and generate a prime scoring chance.

2.   The other area of Marner’s game that benefits the most from his heightened confidence is his shot, and more specifically, his increased willingness to use it.

When in a prime scoring position, he’s recognizing when he’s the biggest threat to score. When the puck isn’t on his stick, he’s making himself available and eagerly calling for the puck in high-danger areas.

On the shorthanded goal, Marner — after generating a high-quality chance by hopping on a turnover up ice — set up in the slot and repeatedly called for David Kämpf to get him the puck before confidently burying it. On the power-play goal, Marner was heading downhill into the slot, where he was able to make a defender miss before confidently beating Andrei Vasilevskiy far-side. The over-passing tendency we often see when Marner isn’t feeling it as much offensively is nowhere to be seen at the moment.

His first goal extended his point streak to 19 games, establishing a new franchise record. Marner now stands alone at the top of the Leafs‘ record book, officially passing Darryl Sittler and Ed Olcyzk’s previous record of 18 games. What a run.

3.   The initial excitement of Marner’s record-breaking goal was short-lived as the Lightning answered back quickly. After Nylander flipped the puck back to the Lightning in neutral ice, the Leafs were in a good defensive posture as the Lightning regained the zone. The puck squirted free into the slot after Auston Matthews collided with Anthony Cirelli, and Justin Holl missed the poke check attempt by an inch before Namestikov pounced and went high-glove on Matt Murray, who seemed unprepared for the shot based on his depth in the net (he was about a foot inside of the front edge of his crease).

4.   After a Lightning goal was overturned due to an offside, the Leafs quickly turned the table and scored themselves. The Auston Matthews line got in on the forecheck and created some offense in tight to the net.

Michael Bunting did a great job on Cernak as the first man in on the forecheck before Matthews did a sort of half-spin move to open himself up for a better position to attack the net. William Nylander was darting across his vision, which led to a nifty pass resulting in a Nylander goal.

Bunting has quietly been on a point-a-game, +9 run over the last nine games, with all but one point coming at even strength. He’s creating a lot more offensively at five-on-five than he was earlier this season through winning battles on the forecheck and creating openings for Matthews and Nylander.

5.   As the Leafs got into penalty troubles early in the third period, the Lightning struck twice on the power play. Six penalties against the Tampa power play is going to be an uphill battle no matter how good your penalty kill is — especially when one of the penalties leads to a kill with Mitch Marner in the box as he was called for a trip off of the opening faceoff to start the third period. Kucherov beat the Leafs through sheer ingenuity on the 2-2 goal.

The next penalty call just a minute later was a tough one to swallow as Timothy Liljegren appeared to only be guilty of making a strong defensive play by taking Kucherov’s stick away as he was driving the net.

The notable part of the 3-2 Lightning power-play goal was how many players were on the ice for the Leafs that don’t kill penalties much at all: Pontus Holmberg, Mac Hollowell, and Pierre Engvall. The entry was easy for the Lightning, and the Leafs were out of sorts following a net-front scramble before Ross Colton buried the 3-2 goal into an almost-empty net. Too much penalty kill time against a good power play will do that to a team.

6.    Mitch Marner‘s power-play goal to tie the game was a much-needed and timely one with the Leafs’ man advantage in a bit of a rut. Heading into the game, they were on a 1/15 skid, which continued through the first few opportunities against the Lightning, but Toronto was generating shots, attacking the net, and getting some good chances.

The Leafs’ power play is at its best when it creates organized chaos that knocks opposing penalty kills out of their structure and attacks the net aggressively. When they go stale,  they’re almost always hanging around the perimeter too much.

The Marner goal was a direct result of Auston Matthews challenging the heart of the penalty kill, creating open space for Marner to walk into and snipe his second of the night.

7.   Nick Robertson was given a big opportunity in this game. It’s not his first go-around on the second line with John Tavares, but it came with the white-hot Mitch Marner on the other wing instead of Nylander.

The hustle was there, he recorded three shots on goal (one challenged Vasilevskiy from distance), and he threw a nice hit in the neutral zone to hold his ground and kill an entry by the Lightning. The timing isn’t as sharp as it could be offensively, and the challenge — especially if he’s going to stick up the lineup — is proving he’s staying switched-on defensively over the duration of his shifts, but he should be in line for a good run of opportunity during Calle Järnkork‘s absence.

8.   The other factor creating an opening for Robertson right now is Alex Kerfoot‘s general struggles, as this is the type of game — playing against a good team that presents matchup dilemmas on the road — where Keefe would often return to moving Kerfoot next to Tavares last season. Kerfoot made a nice play against the Sharks to shoot low to the far pad leading to the Pierre Engvall game-winner, but tonight was a continuation of a 21-game goalless drought, and his shot rate has fallen to just one shot per game in the last nine.  On the 2-1 Lightning goal that got called back, Kerfoot lost a few battles in the preceding sequence.

This is a critical evaluation period for Robertson as the Maple Leafs decide what exactly the plan might be for their left-wing position looking ahead to the deadline and playoffs. Bunting’s game is turning a corner offensively, but the same can’t be said for their other left-wing options at this time: Robertson has zero goals and three assists in the 12 games since his two-goal debut, Kerfoot has 10 points in 26 games (32-pace pace), Engvall has six points in 26 games (20-point pace), and ZAR has four points in 24 games (14-point pace).

9.   The goal didn’t count (ruled a kick-in), but this end-to-end rush by John Tavares showcased the extra bit of explosiveness in his stride this season. He’ll never own elite separation speed, but an extra half-step makes a big difference for a player with his skill and strength on the puck, and to see him dance through the neutral zone — working his way through both Victor Hedman and Anthony Cirelli, no less — was impressive. It’s been evident that Tavares has been able to take defenders on with more success this season, which is a hugely encouraging sign for the Leafs.

the goal was called off but what an end-to-end effort from Tavares pic.twitter.com/RZSy8dSTsl

10.   Not 10 seconds after Chris Cuthbert mentioned that the Leafs had been practicing their three-on-three play, the Leafs were picking the puck out of their net on the first shift of OT yet again.

Auston Matthews sent a no-look backhand pass that was way off the mark and the Lightning went the other way, where Alex Killorn found a hole in Matt Murray from outside of the faceoff dot.

Murray simply needed to stop it as it was by no means a grade-A scoring chance created off of the Matthews giveaway. But it’s true that the Leafs remained too casual in possession yet again in overtime. To collect one out of a possible 7 extra points is really, really dismal for a team with this offensive talent level. 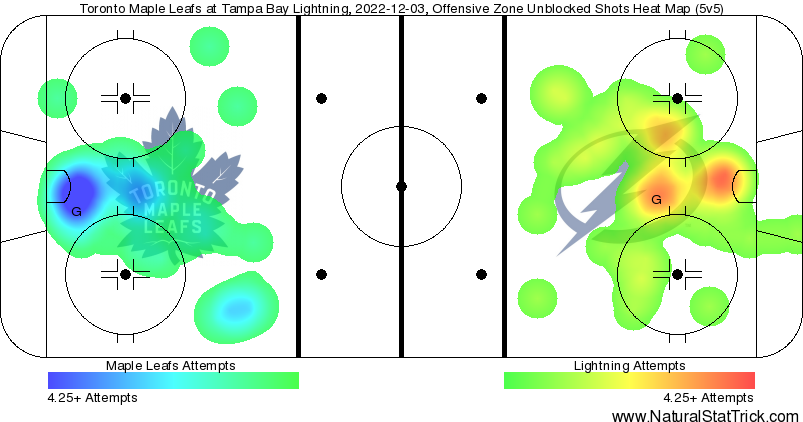