The Toronto Maple Leafs are in a unique predicament in the wake of the $10.893M Mitch Marner deal.

They are so stretched within the $81.5M salary cap that many Marlies and other low-cost roster options are now too expensive. By my analysis, it leads to only one roster option in November.

There is a winner and there is a loser.

Zach Hyman ($2.25M) and Travis Dermott ($863.3K) are expected to be on Long Term Injured Reserve to start the season. That makes the opening night roster fairly straightforward. This 23-man example is $250K below the cap (your lineups may vary). 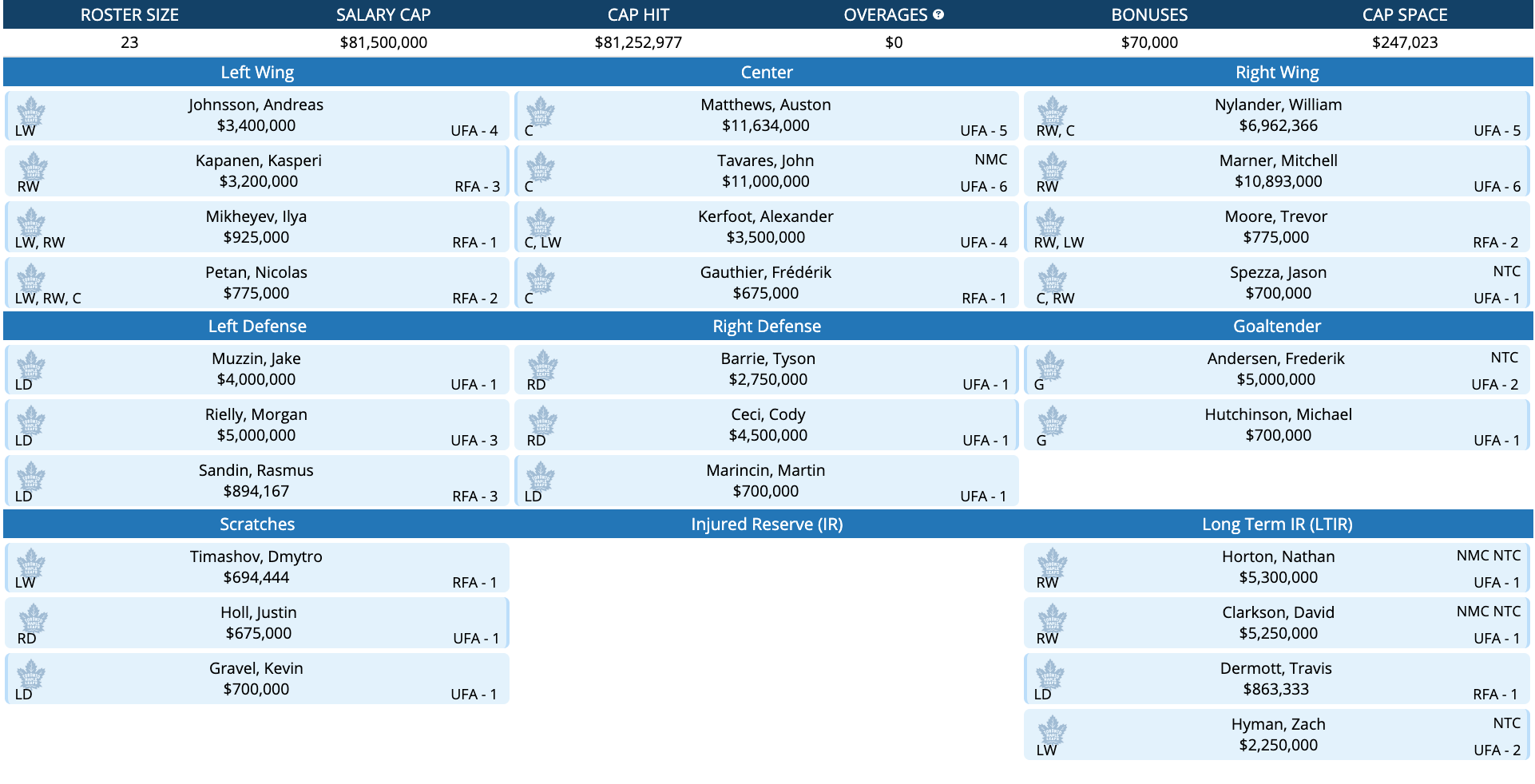 *This is a simplification. LTIR is never perfectly utilized at the start of a season and the actual way it technically works above the $81.5M Cap is not covered here. See CapFriendly for more on LTIR. Also keep in mind that the training camp roster the Leafs use to apply for LTIR is different. Also, when a team uses LTIR, they cannot accumulate ‘cap savings’ each day they are ‘below the cap’.

The top-nine forwards and top-four defensemen appear to be locked in at this point. Mike Babcock tinkered with the bottom of the lineup throughout the preseason and has reached some decisions. On Saturday, he confirmed that Rasmus Sandin has made the team.

He also all-but-confirmed the status of pre-camp bubble players Frederik Gauthier, Jason Spezza, and Trevor Moore (Moore was only on a mini-bubble). Martin Marincin also appears to have made the opening roster after Jordan Schmaltz and Ben Harpur were placed on waivers, cleared, and reassigned to the Toronto Marlies. (As an aside, I was contacted by an analyst in Slovakia who filled me in on Marincin’s improved and exceptional play for Slovakia this past World Championships. I have to admit I still remained skeptical but what I saw in the preseason backed up what he said.)

If all goes well, Zach Hyman and Travis Dermott should be in the lineup by Game 16 on November 5.

The promotion of Rasmus Sandin after his stellar training camp means that the Leafs still have one important decision to make. Because Sandin was still 19 years of age on September 15th, the Leafs have the option of sliding his Entry-Level Contract for one year if he plays fewer than 10 games. If we see Sandin suit up on October 21st for a home game against the Blue Jackets, we know he’s staying.

I asked Twitter what they thought the Leafs would do. At the time I checked in on this poll, 82% were voting “Sandin STAYS!” .

#Leafs If Rasmus Sandin plays fewer than 10 games, his 3 year entry-level contract will ‘slide’ 1 year, pushing off the time when his 2nd contract must be negotiated.
Do you think Leafs will send him back to the Marlies before the 10th game or not?

Sandin’s play in the regular season will be the last hurdle, but the odds are his game stands up. That said, as all rookie defensemen do, the “Sandman” is bound to hit some bumps along the way, and I hope the fanbase is patient with the teenager.

Sandin’s $894K cap hit will need to be accommodated in November, assuming he survives the ten-game mark. Gauthier and Spezza appear to be locked for the fourth line; both played well enough and have rock-bottom salaries ($675K and $700K).

There are only two spots open (4th line LW and a reserve) to form a 21-man roster and we have a remaining cap space of $1.45M to work with. The fourth line LW spot has several contenders, the obvious leader being Trevor Moore, who mostly played RW on the third line in preseason while Kapanen has been filling in for Hyman. The other primary candidates are Nic Petan, Kenny Agostino, Dmytro Timashov, and possibly Egor Korshhov.

If there is still space to make a 21-man roster, Marincin is the most likely reserve, able to play both the left and right side as well as pitch in on the penalty kill.

I took all of this and ran a set of LW/Reserve combinations to see what was doable under the Cap. Below is a shortlist of the key results.

The Leafs can only keep one of Trevor Moore, Martin Marincin, or Nic Petan.

I believe that player is Trevor Moore.

Losing a promising winger like Trevor Moore is really not an option. Yet his $775K cap hit means that Marincin would end up on waivers, replaced by Holl. That would be an important loss, felt as soon as the first injury occurs. The only way they can keep him is to go with Timashov or Agostino instead of Moore.

I threw Marchment and Korshkov in just to highlight some depth options. Neither opens a way for Marincin. In fact, Korshkov’s $925K hit would mean they have to go with a bare-bones 20-man roster. That seems unlikely.

After reviewing this, I decided to go back and see if removing Spezza ($700K) from the fourth line would help. The most you would save is about $5K because the only cheaper replacement is Timashov ($694K). That’s not enough.

The final option is not to keep Sandin past the nine-game mark and return him to the Marlies. I’m not sure that’s a very good idea, either for him or the team. The Leafs brass will no doubt be talking about it as they assess how the first nine games go, though.

Sailing Close to The Wind

Kyle Dubas has been sailing close to the wind when it comes to the cap; a small nudge of the rudder and the boat could become stalled.

Even now, Martin Marincin and Nic Petan are the first expected casualties of the Marner contract.  A Marner deal worth $25K less than the $10.893M vanity plate figure keeps Marincin on the team. A $10M deal, still exorbitant, keeps both Marincin and Petan as reserves. (I picked on Marner because his contract was a large overpayment. His is also the most recent, in a situation where both parties were fully aware of the Leafs’ roster challenges.)

Despite all of this, Dubas will field a team that is undoubtedly one of the best and most exciting in the league. The roster is also one of the best this century for the Toronto Maple Leafs franchise.  The 2019-20 Toronto Maple Leafs remind me of a thoroughbred, bred to race like the wind with all excess weight jettisoned — and hopefully trained to avoid injury over a long course.

Saddle up. The season is coming at us fast.

Leafs Notebook: How much do championship teams load up their top lines with ice time?

Kyle Dubas on the Toronto Maple Leafs’ progress defensively: “When our...

Brendan Shanahan on Auston Matthews missing out on the chance to...