After a brutal opening period, the Maple Leafs never quite got on track offensively on Thursday night in Detroit.

The Leafs certainly didn’t have their best stuff in their fifth game in eight nights (and second in 24 hours), although they were a shot away from earning a point late in the game mostly thanks to the performance of Ilya Samsonov.

1.   After making his debut Wednesday night, Bobby McMann appeared to have scored his first career NHL goal in Detroit just 56 seconds into the game. Off of an offensive-zone faceoff, McMann hustled to swat the puck at the net before kicking the puck off of a Red Wing skate and into the net. Directed by a distinct kicking motion, the puck did not touch a stick from either team prior to entering the net, resulting in a disallowed goal.

By the letter of the law, disallowing the goal was the correct call — the same as it was the correct call when it benefited the Leafs against the Devils earlier this season. It’s a bit of a weird reality of the rulebook that a puck directed away from the net could be considered a kick-in, but there isn’t much grey area to debate on this one with the way the rule is written.

2.   In the aftermath of the disallowed goal, the Wings started to gain significant momentum. They generated a few high-danger chances, and in general, controlled a significant share of the puck possession. There were issues early on with the connection between the Leafs‘ forwards and defensemen, resulting in rush chances for the Wings.

One of those situations eventually ended up in the back of the net. After a Morgan Rielly turnover in the neutral zone, Dylan Larkin picked up the puck and gathered speed in the neutral zone. The threat of Larkin’s pace backed off Jordie Benn and opened up an easy drop pass to Lucas Raymond, who ripped a shot far-side.

Benn assumed the forward support was in place on the trailing attacker and tracked the passer (Larkin) to the post. It wasn’t the best read given the situation — as opposed to stepping up into the shooting lane — but John Tavares didn’t cover himself in glory on this play as he was caught flat-footed just inside the blue line, providing no defensive support as the Wings drove downhill. It was a sloppy neutral-zone turnover followed by an even worse sort-out by the Leafs defensively in the subsequent transition.

It easily could’ve been 2-0 or 3-0 Red Wings after the opening 20 minutes, but a combination of some good fortune for the Leafs and good saves by Ilya Samsonov kept Toronto a shot away after 20 minutes.

3.   A lack of discipline seeped into the Leafs’ game in the second period. Toronto got into penalty trouble to open the period as both Morgan Rielly and Jordie Benn found themselves in the box. Toronto managed to kill the 40 seconds of five-on-three time, but the Wings eventually struck on the second power play.

After losing his stick, Alex Kerfoot inexplicably abandoned the zone and chased his twig out to neutral ice while the Wings still had possession of the puck. The middle of the ice was left wide open, and Robby Fabbri was gifted an easy one-timer goal.

There was not much Ilya Samsonov could do on the play; after a string of really good saves, he was completely hung out to dry here. Fabbri might’ve made an accidentally-on-purpose effort to push the stick out of the zone, but Kerfoot needs to stay in the play in that situation.

4.   The entire Leafs team up to this point looked completely tired and lifeless. The team just did not have their legs through the first 25 minutes of the game. To their credit, the tide started to change after the second Wings goal in terms of the amount of pace and energy in the Leafs’ game.

Toronto started to move their feet more and got in on the forecheck more effectively. As the cycle game got going offensively, they received a fortunate bounce to bring the game within one.

After receiving a cross-ice pass from Timothy Liljegren, Rasmus Sandin gave the puck to Tavares for a give-and-go. Sandin was able to get enough separation from Lucas Raymond to receive the return pass from Tavares before putting a shot on net in search of a deflection. Fortunately, he got one off of a Detroit stick. Nicely worked goal.

Sandy gets us one back! pic.twitter.com/gK1aLsWrYV

5.   The rest of the second period was certainly more entertaining as the Leafs got their legs back. Unfortunately, they didn’t fully improve their adherence to a sound defensive structure. Ilya Samsonov needed to bail out the team several times to keep them in the game.

The Red Wings were credited with five total high-danger chances at five-on-five through 40 minutes, but that number feels low.

6.   We are getting to a point where the Leafs are scrambling for ideas for the right pairing to feature Morgan Rielly.

We know the Rielly-TJ Brodie combo is the most effective mix of styles, but Brodie is back on the IR and Rielly is yet to find his footing since returning from his knee injury. We’ve learned to accept a certain amount of leakiness the other way given all of what Rielly brings offensively, but what can’t be lived with as much are the struggles to successfully transition play from the defensive zone to the offensive zone without turning the puck over. It’s directly hurt the team leading to goals against in this recent back-to-back.

Maybe some of it is a timing and confidence issue coming back from injury as he still awaits his first goal of the season, and maybe we see a sharper Rielly when a puck finds the back of the net for him. But no matter the partner, the solution for his pairing has to start with Rielly playing better — full stop.

7.   I mentioned Bobby McMann nearly scoring a gritty and hard-working goal earlier, which would’ve been a very fitting first NHL goal for him. His play throughout the night was really consistent in terms of the effort level. He plays with reckless abandon and has an impressive top gear at his size, which all comes together nicely for him on the forecheck.

On a night where the overall energy level was a struggle for most of the Leafs’ skaters, McMann was a breath of fresh air. His constant downhill presence and willingness to drive to the net sparked some of the few Leafs chances throughout the dreadful opening 30 minutes.

McMann actually ended the game leading all skaters with a 98.78 xGF%, which is pretty remarkable given the team’s off night. He should stay in the lineup in Boston on Saturday regardless of Matthews’ status.

8.   As the game wound down, the Wings started to crawl into a shell. The Leafs held the puck a majority of the third period, but they weren’t able to penetrate the Wings’ defensive wall and generate much within the interior of the offensive zone.

They had a few good chances, but it didn’t feel like a truly threatening push. Toronto tried pulling the goalie with just over two minutes to go after an icing against the Wings, but Tavares lost the faceoff and the Wings’ clearing attempt found its way into the Leaf net from 180 feet out to make it 3-1.

Detroit also added a power-play marker in the final minute to make the final score look more reflective of the overall balance of play in the game.

9.   After starting the game with a trio of Bunting-Kerfoot-Nylander, Sheldon Keefe opted to move Pontus Holmberg into the second-line center role in the final 30 minutes or so of this game. Likely due to the more natural center presence Holmberg brings, it did help the second line generate a little bit more as the game wore on. Holmberg drew both of the third-period power plays that the Leafs squandered in the third period.

Michael Bunting appears to be missing Auston Matthews and didn’t have his best night on the other wing; he had a few chances on the man advantage, but he was most notable at even strength for getting knocked to the ice and acting incensed with the officials.

10.   Losing the special-teams battle 2-0 in a tired situation on the road creates a huge uphill climb for any team, although the Leafs did not really deserve much better on the balance of their even-strength play. I suppose it was somewhat reassuring that they didn’t totally disappear into the night in the second half of the game.

We can talk about kick-in rules or the five power plays for the Red Wings to the Leafs’ three, but this was a deserved loss for the Leafs. The bigger-picture concern: What do three goals in two games without Auston Matthews — including going one for eight on the power play — say about the Leafs’ scoring depth?

Wow, Leafs scored 3 goals in two games without Auston Matthews. It's almost like a team whose third line is David Kämpf, Alex Kerfoot, and Pierre Engvall doesn't have enough goalscoring

The evidence is piling up that another impact forward should be the number one priority for Kyle Dubas before March 5th. An honest reflection on the past few playoff losses doesn’t point to porousness defensively or grit down the lineup as the areas of the game costing the Leafs when it matters; it’s the lack of goals in elimination games at both even-strength and on the power play. 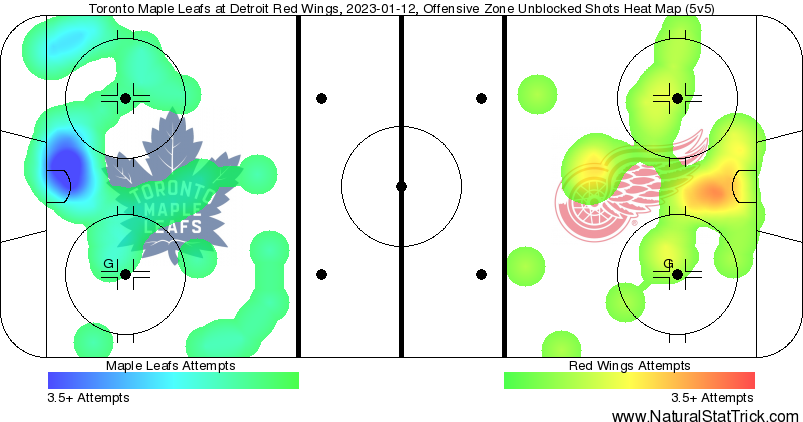