At five-on-five, SKATR sees an offensive second-line winger who has strong goal-scoring ability (84th percentile), who can make plays (primary assists at 75th percentile), but who is not known for two-way play-driving. His relative to teammates expected goal share (Rel TM xGF% 25th ptile) and expected goals against (Rel TM xGA60 14th percentile) are well below the league average.

SKATR focuses on 5-on-5 play and per 60 rates to allow fair comparison. The bars are labeled and show percentiles — the ranking score against fellow NHL forwards or defensemen. The glossary, guide, and interactive tool can be found here at MLHS. 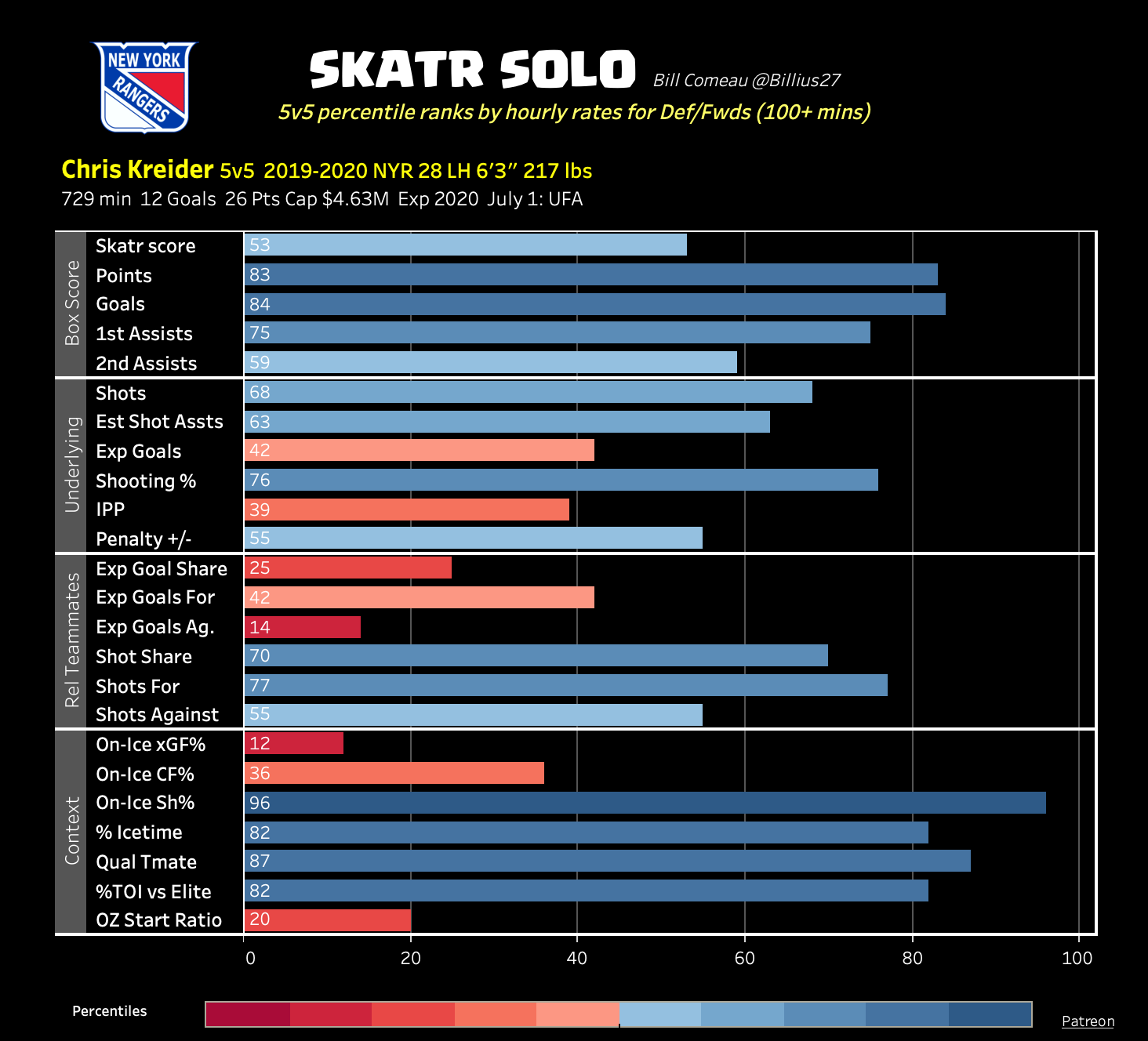 Martinez is a veteran left-handed defenseman who can also play the right side and potentially fill out a top 4. At 32, there is some evidence of decline – although he faces average competition, his relative to teammate play-driving numbers are subpar, most notably his shot share (CF%) which is only at the 14th percentile.

On offense, he shows good passing abilities, ranking at the 76th percentile in estimated shot assists per 60 and 70th in secondary assists. He also plays on the penalty kill but ranks at the 28th percentile relative to his team on xGA/60. 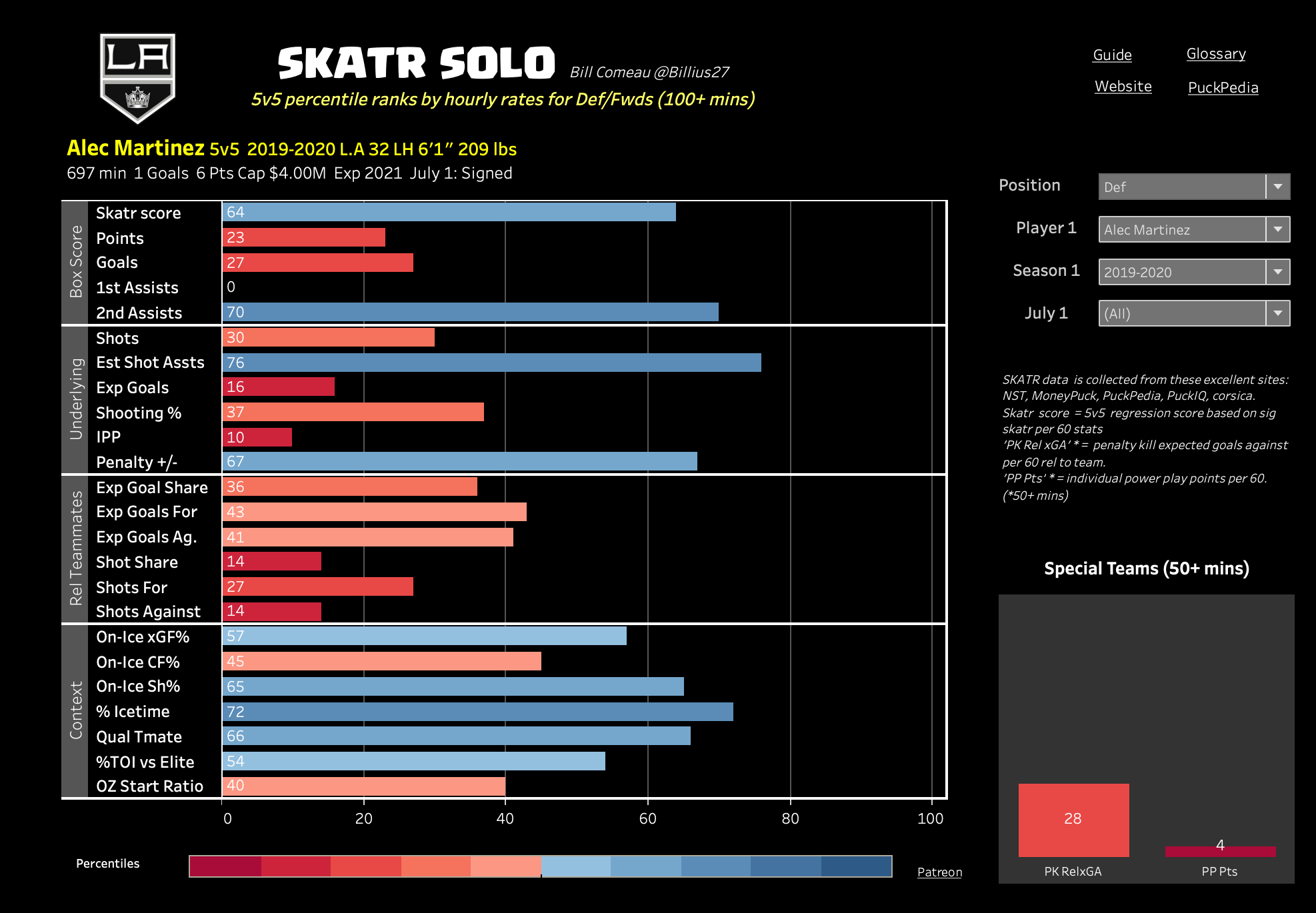 Pageau has been hot, riding a 17.4% shooting percentage and chalking up 21 goals and 34 points in 55 games this season (13 at five-on-five). Although his shooting will regress at some point, those are excellent numbers and include two shorthanded goals. He is also at the 75th percentile in power-play points per 60 (lower right meter on chart).

At 5-on-5, besides goal production (84th percentile), two things stand out: 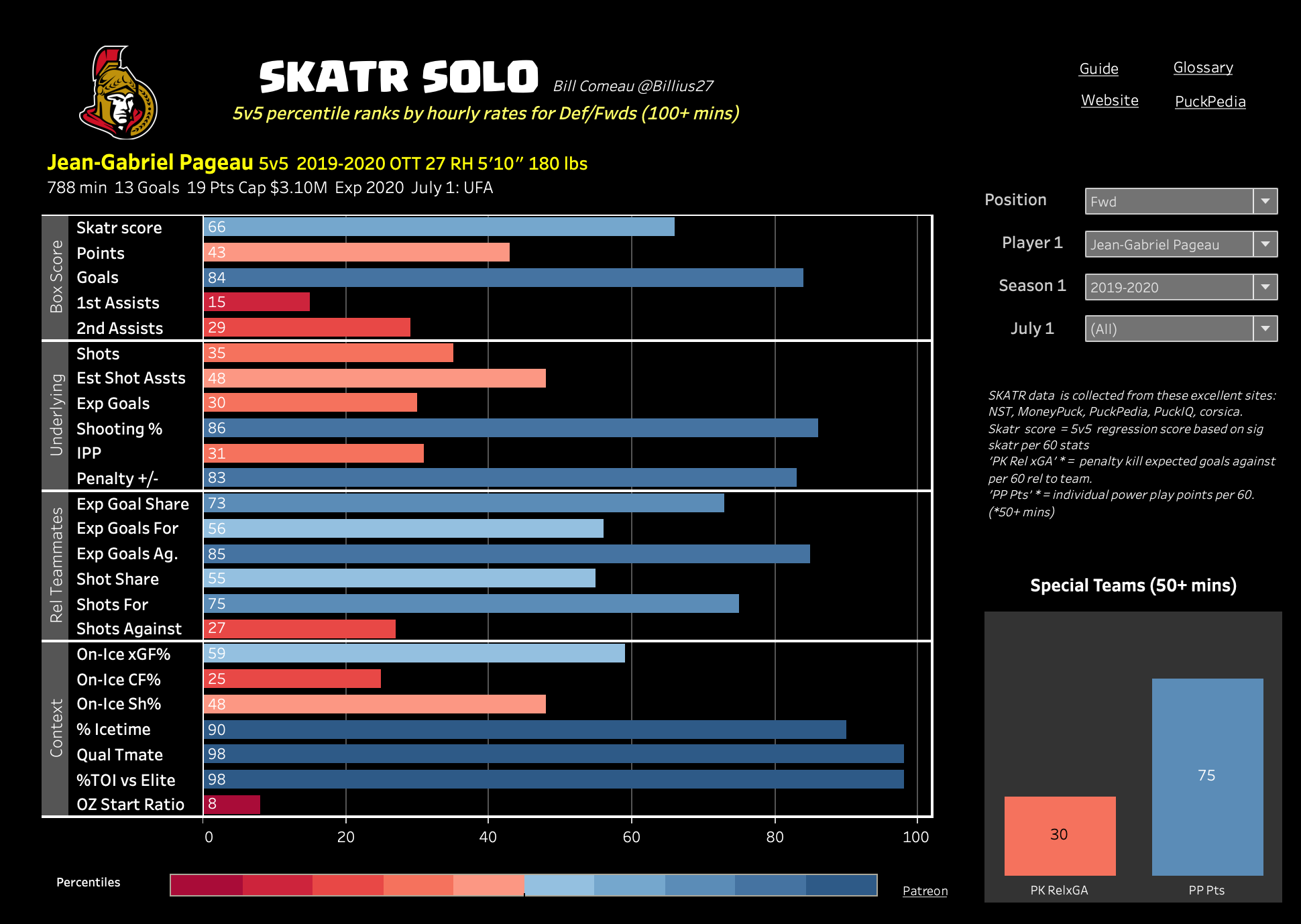 The 5′ 10″ Sami Vatanen has put up 23 points in 47 games, including five goals. Right-handed defensemen are sought after, so he faces a good chance of being picked up by the trade deadline.

The penalty differential stat often goes overlooked, but it is important for defensemen, and Vatanen is at the 86th percentile. However, his shooting percentage is not likely to be sustainable.

Vatanen’s ‘two-way relative to teammate’ results point to a defenseman who has fared better on the defensive side of his team (Expected Goals For per 60 at the 18th percentile for example, compared to 59th on Expected Goals Against per 60). Note that HockeyViz.com’s heat maps are not as positive about Vatanen’s individual defensive (they show a +6% increase in threats against when Vatanen is on the ice).

His usage at five-on-five and special teams suggest a versatile number-four defenseman at this stage of his career. 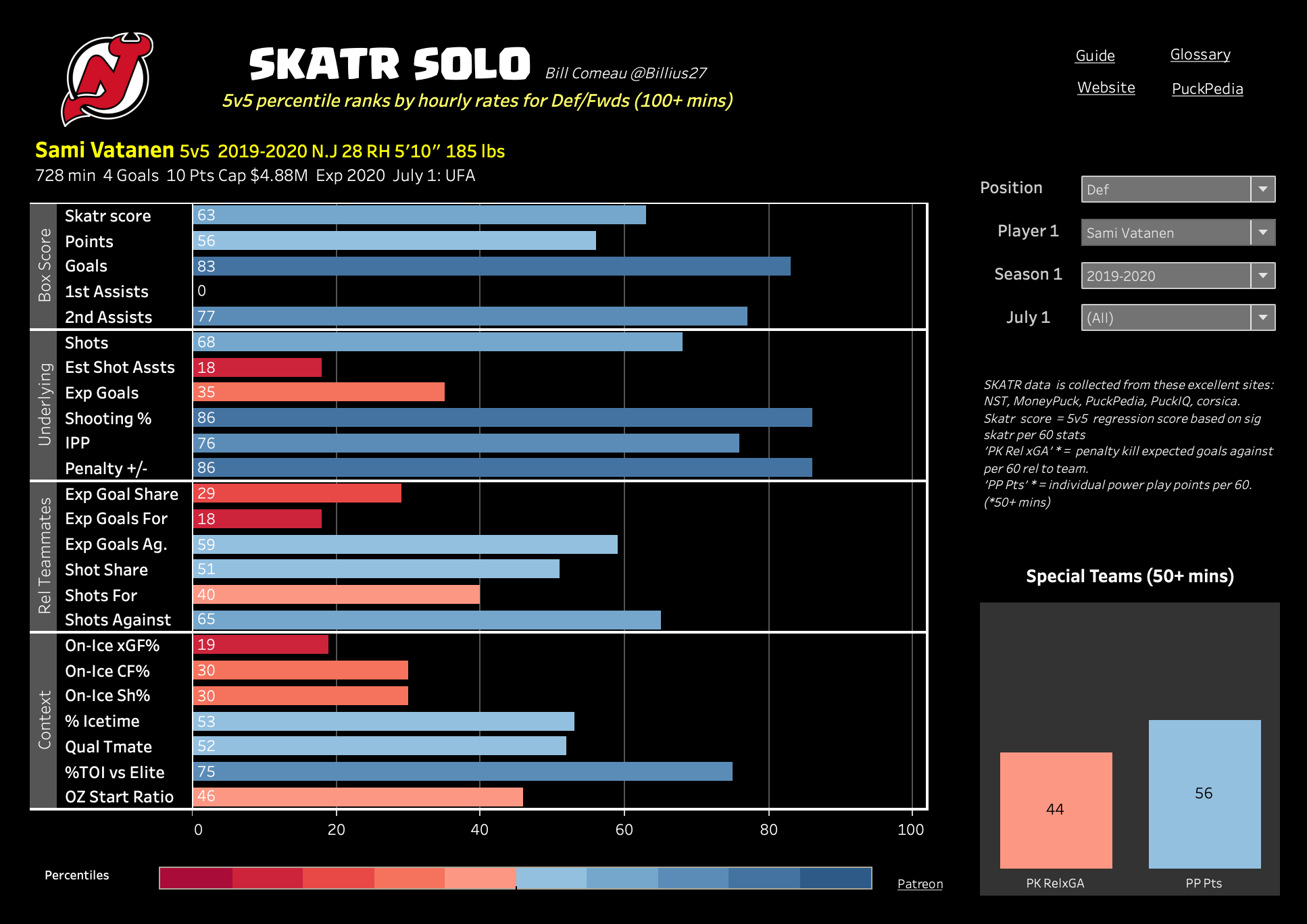 Dillon is a prototypical defensive defenseman with size. At 6’4 and 225 lbs, he can play the heavy playoff game without a problem. His offense is average, putting up 14 points this season.

But what stands out in SKATR is his ability to suppress expected goal chances against. His relative to teammate xGA/60 sits at the 92nd percentile and his relative shots against per 60 is at the 83rd. These are excellent defensive numbers. He also puts up above-average penalty kill numbers (56th percentile). 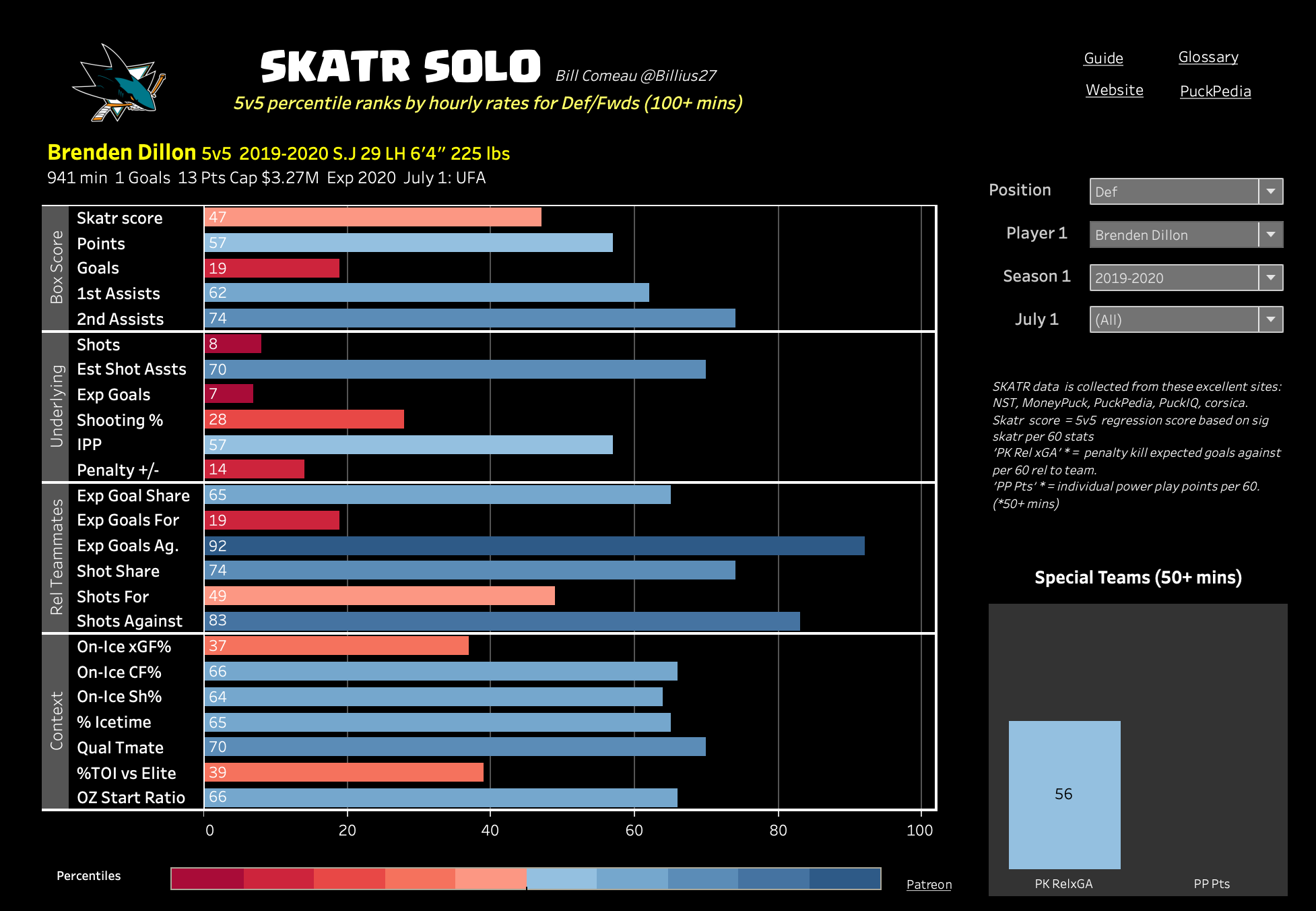 The top-five TSN trade bait players each have strengths and weaknesses, but for the right team, they could provide a boost in a playoff run.

Some of these are big names that will receive most of the buzz (i.e. Chris Kreider), but I would not underestimate the value of Jean-Gabriel Pageau and Brenden Dillon. Their two-way five-on-five game will be sought after in a league that is short on quality defense.