The Toronto Maple Leafs are looking for a top-four defenseman who can defend, man the right side, and who has term left on his contract. Enter Josh Manson.

“People are going to say, ‘What about Josh Manson in Anaheim? Is Anaheim prepared to do something?’ They haven’t advertised the fact that they might be trading Manson, but I think Bob Murray is probably going to be all ears as we head up to the deadline. I don’t think there will be a stone left unturned.”

This is my fourth article in an MLHS Analysis series tied to trade prospects. The first two covered the Leafs‘ second-tier wingers and the last one covered Matt Dumba.

Now it’s time to keep our heads up and take a close look at Josh Manson of the Anaheim Ducks.

Josh Manson is a 28-year-old right-handed defenseman who also has an attractive $4.1M contract lasting through the 2021-22 season. He plays a physical game and uses his 6’3″ 224-pound frame to his advantage. Manson is known more for his defensive play and thundering checks.

Statistically, hits are not an easy thing to analyze. Most hits are relatively minor or meaningless in a game, are recorded differently from rink to rink, and they only tell us who doesn’t have the puck. They are often tied to bottom-six players who are more focused on a checking role. Analysts won’t usually find a connection between hitting and team or player success. That said, Josh Manson is one of the best hitters in the game, ranking fourth in the league with 6.75 hits per hour.

Shift-changing or possession-changing hits are obviously useful — especially in the playoffs — as long as a player is good at it and doesn’t get caught out of position or put his team on the penalty kill.

When I think of Josh Manson, I think of several things that make him a good defensive defender beyond hits: He has a very good stick, aggressively manages a close gap, wins defensive-zone puck battles, finishes his checks, protects the net front, and makes opposing forward zone entries “difficult,” as seen below.

Although the clip below is a little dated, I wanted to showcase some of his defensive abilities. Notice how Manson swings around, uses his stick on the forward as he crosses the centerline, and then uses his strength to shove him off the puck and down to the ice. Although he is not the fastest skater on the ice, he has quick feet and good balance for situations like this one.

I
Now let’s switch to Josh Manson’s actual results when he is on the ice.

Like Matt Dumba, who I reviewed a couple of days ago, Josh Manson has been in the midst of an offensive slump, although he is not known for his offense anyway. That has been compounded by a knee injury that kept him out of the lineup for over six weeks through November and early December.

Josh Manson has to be helped off the ice with a left leg injury late in the first period. pic.twitter.com/xbRAFBKZN7

Manson recorded a career-high 37 points two years ago, but that was probably an anomaly. In his other seasons, he has never exceeded 17 points. This season, he has one goal and four assists in 27 games.

SKATR is a 5-on-5 player evaluation tool that provides an exploratory ‘wide lens’ on 24 per 60 statistics. The bars and their labels are percentiles ranging from 0-100. You can try SKATR yourself on the MLHS’s NHL Advanced Statistics page, where there is also a glossary and a guide available.

Because of the injury, Josh Manson has only played 27 games up to the time of this report, so we should use some caution in interpreting his 2019-20 results.

To sum up, SKATR is showing a complex profile of a defenseman who has had an injury absence, fewer games to review, low offensive results, and evidence of very good play-driving and defensive numbers under a heavy level of elite competition this season. Manson’s previous season featured higher ice time and a significant shutdown role, but mediocre results overall.

Given some of this variability in results, it’s time to look at two advanced [paywall] metrics over a longer time period. Perhaps we can get a clearer picture.

RAPM stands for Regularized Adjusted Plus-Minus, a statistical method that tries to isolate a player’s individual contribution when on the ice. It came about as a way to deal with the common unadjusted “plus-minus” statistic, which is a number covering everyone on the ice including goaltenders. Plus-minus is still blatantly misused by many to evaluate a single player. More on the RAPM methodology can be found here. The closest analogy to classic metrics would be the Relative to Teammate per 60 statistics in SKATR.

This 2016-19 chart for Josh Manson shows positive impacts above the zero line and negative below. The vertical scale is in standard deviations, so roughly two-thirds of defensemen will be in the +/- 1 range and 95% will be in the +/- 2 “Z-score” range. The horizontal scale gives five different RAPM metrics.

What all this means: In 4,079 even-strength minutes, Josh Manson has shown good isolated defense. 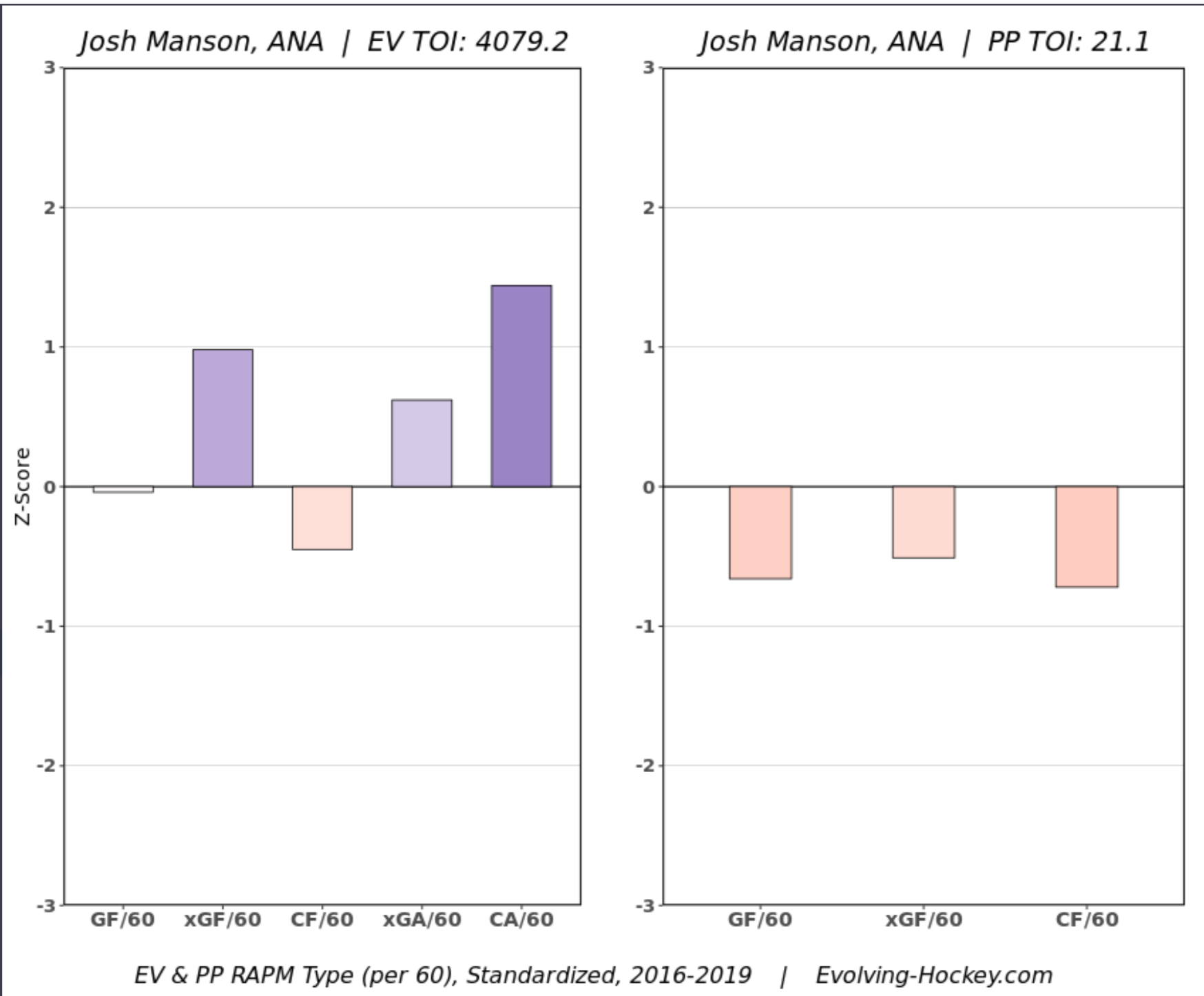 Hockeyviz.com utilizes a unique rink coordinate-based threat model to isolate a player’s contributions after accounting for competition, teammates, and other factors. These five-on-five rink maps show the result with offensive zone maps at the top and defensive zone ones at the bottom; red areas show a more intense threat, while blue shows a lesser threat.

Looking at the top rink maps, Josh Manson is estimated to have reduced his team’s offensive threat by -3.4% compared to the league average. The two prior seasons were also negative.

One technical point to keep in mind: This model includes a Bayesian element — meaning, there is some blending of the previous season in the current season’s results to help stabilize it. Nonetheless, RAPM and these heat maps differ on Manson’s impact. 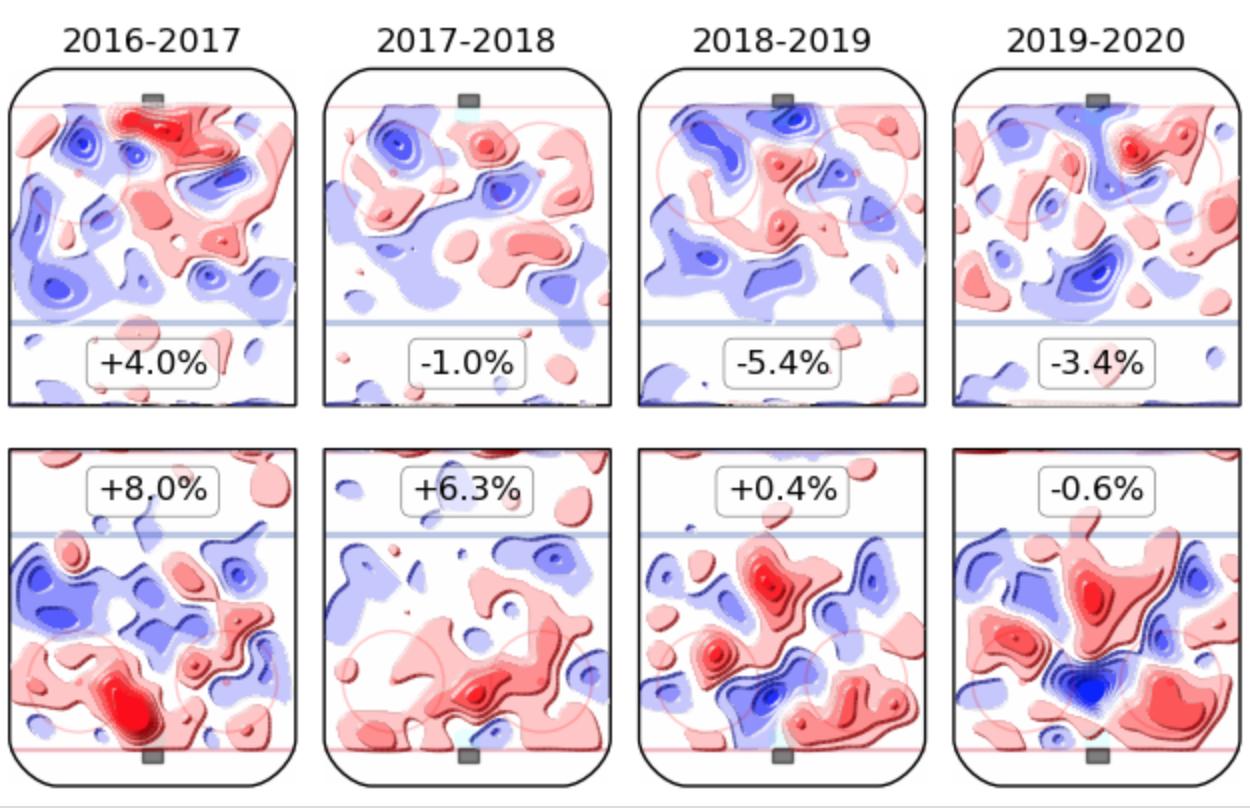 This review is based on available public data and advanced isolation metrics on Josh Manson. Here is how I would summarize our findings:

These differing results could well be tied to the difficulty in isolating a defensive defender from two other good defenders (Lindholm, Fowler) on a struggling team. Basically, when things go south, everyone takes some share of the blame, no matter how much models try to separate out players.

With little doubt about his low offensive impact and despite the ambiguity around his defensive impact, my conclusion is that John Manson fits the mold of what the Leafs are looking for in a right-handed, top-four, shutdown defenseman.

Given his contract, I believe Ducks GM Bob Murray may be reluctant to make a move and is not going to sell low or quickly. Josh Manson is very good value at $4.1M. If there is a reason to make a trade, it will be to trade from strength and seek a significant improvement on offense. Given the return that Los Angeles received for Jake Muzzin, Anaheim could probably command at least a first-round pick and a good prospect or roster player.

Since I understand that Toronto’s first-round picks in 2020 and 2021 are unavailable at this time (they are both conditional picks tied to Patrick Marleau’s move to the Hurricanes), that means other teams may have the advantage if the Ducks choose to make a move.

I went through the trade value of four Leafs wingers at the end of a recent article. Of those four, I believe RW Kasperi Kapanen would attract the most interest for a team like Anaheim (age, physical ability, and speed being three factors).

I’m doubtful that a second-tier winger like Kapanen or Johnsson would be enough. To compete with other teams and complete the deal for a low-cost shutdown RD, I think it’s likely that the Leafs would need to add a sweetener(s) either with pick(s) or another young player or prospect. There is also the .9M gap between Kapanen’s ($3.2M) cap hit and Manson’s to sort out given the Leafs‘ tight cap situation once Morgan Rielly returns.

Whatever the package may be, I believe that even with some of the mixed numbers I presented, Josh Manson would fundamentally plug a hole on the Leafs right side much like Muzzin did on the left.

If he hasn’t already, Kyle Dubas will very likely take a run at Josh Manson in the wake of Morgan Rielly’s injury. I’m just not sure the right deal can be struck between Anaheim and Toronto.